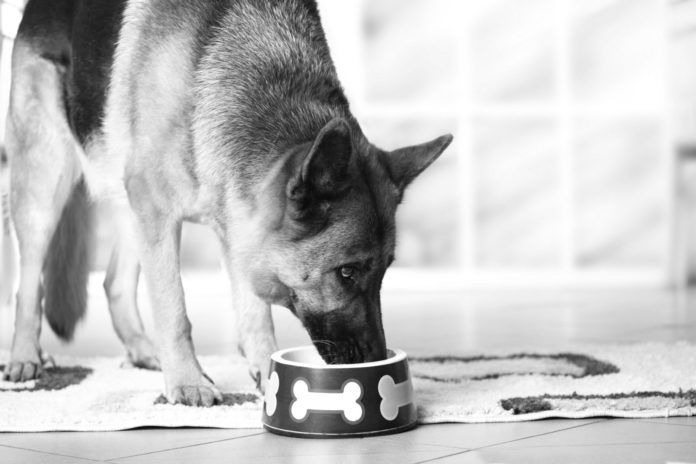 Walk into a pet food store, and you’ll find no end of dog foods enticing you with large, eye-grabbing lettering beseeching you to buy the product for your aging pet. Some of the claims are a cinch to spot as bogus. One “senior” dog food, for instance, says its “farm-grown pumpkin” is “easy to digest for sensitive stomachs.” We had to laugh. Would growing pumpkin in a backyard rather than a farm make it more difficult to digest?

But many have a more scientific cast, as in “optimal blend of calcium, phosphorus and essential vitamins to help maintain the bone health of mature dogs.” What do such claims mean?

The answer: whatever each company wants them to. By law, a food for puppies must contain specific levels of various nutrients to support a dog’s growth until she reaches adulthood. Food for pregnant and lactating bitches must also meet legal limits for a bevy of nutrients so that both mother and her babies, born and not-yet-born, will remain healthy. But senior food or food for aging dogs? There’s no legal definition for it because while studies on the nutrition requirements of older dogs are moving forward in providing the veterinary research community with intriguing information, there’s not yet enough of a knowledge base to set definitive standards.

Human requirements are known with certainty to shift with age, with recommendations that people get more of such nutrients as vitamin D after age 70 well grounded. But there’s not even a legal senior age for dogs. Indeed, some packages of food for “seniors” have a big “7+” on the front, others, a “6+” and still others an “11+.” It’s about marketing, not about the science of canine nutrition.

The proof is in the fine print, often crumpled into the side folds of the package, way at the bottom. Every bag or can of dog food must contain a Statement of Nutritional Adequacy, which is not a marketing ploy but, rather, a legal requirement. It says whether the food is appropriate for growth (puppies); gestation and lactation (pregnant/nursing dogs); or maintenance (dogs at least one year of age who are not pregnant or lactating). Sometimes it will also say for all life stages, meaning it has high enough levels of nutrients to support the growth of puppies and the large nutrient needs of pregnant or lactating dogs in addition to those of all other adult dogs. But never, never, does it say for older, or senior, or aging dogs. Look for yourself. A package of dog food that claims to be for older dogs in 18-point type on the front will never say it’s for older dogs where it counts, in the 6-point type on the side, bottom, or back.

It can’t. The Statement of Nutritional Adequacy comes from requirements set by the Association of American Feed Control Officials (AAFCO), which is the body that sets canine nutrient profiles — the equivalent of the Dietary Reference Intakes for people. And because of the lack of research conclusions on the nutrient needs of older dogs, AAFCO has no guidelines for senior pets’ nutrient levels. To pretend it did would be flouting the law.

Other clues that “senior” diets may not be top flight

The Statement of Nutritional Adequacy does more than prove that there’s no such thing as a universally recognized set of nutrient standards for older dogs, manufacturers’ insinuations in their marketing tactics to the contrary. On many dog food packages, it also shows that the food being sold hasn’t even gone through the most rigorous testing available.

Consider that there are generally two ways a dog food can pass muster as far as its nutrient composition. One, it can simply be formulated to meet the nutritional levels established by the AAFCO Dog Food Nutrient Profiles, or two, it can actually have gone through (not inexpensive) animal feeding trials using AAFCO procedures to make sure the vitamins, minerals, and other essential nutrients in the product truly are digested and absorbed by dogs. Such trials also help to identify whether there are interactions between nutrients that could hinder nutrient utilization. The Statement of Nutritional Adequacy will tell you which route the product took to get to the marketplace. The better choice, clearly, is one that went through feeding trials; it has an added measure of assurance that the food will support your dog’s health. (A third possibility you might see is “for intermittent or supplemental use.” While some veterinary diets have this statement because they are specifically designed to have lower levels of certain nutrients to help treat disease — for example, kidney disease — you should never feed an over-the-counter diet with this statement as a significant proportion of your dog’s diet.)

Interestingly, almost every single “senior” dog food we found was not put through the extra work and expense of a feeding trial by its manufacturer. It was just formulated to meet AAFCO standards — perfectly legitimate, perfectly legal, but not the very best proof of adequacy. Also, not every food was made by a reputable, well known manufacturer. That’s just as important as feeding trials. A reputable manufacturer will have the scientific knowledge to design a food that meets all your dog’s nutrient needs in optimal proportions and will also have rigorous quality control standards

Unfortunately, feeding your dog a so-called senior diet — and perhaps paying a premium for it — may have consequences more significant than your being misguided. It can cost your pet her optimal health.

We knew of one dog, a lovely mixed breed, whose owners switched her from her usual food to a “senior” diet after she was diagnosed with heart disease at the age of nine. They loved her and wanted to do right by her. But the food made it even harder for her to cope with her condition. It was higher in sodium than the food she had been eating, and that translated into her needing even more drugs to control her disease.

We also have seen a beautiful, dignified golden retriever who, at age 14, had kidney disease and was made even sicker when his owners put him on a “senior” diet that they thought would be gentler on his organs. They had the best of intentions, but it turned out the new diet was higher in protein and phosphorus than the one he had been on previously, and that only taxed his kidneys even more.

Calories can be an issue, too. “I’ve commonly had people come in and say, ‘My dog has gained weight and I don’t understand why,” comments Lisa Freeman, DVM, PhD, DACVM, director of our nutrition clinic. “It turns out their pet turned eight or nine, so they switched her to a senior diet, often in the belief that it has fewer calories than other dog foods, since dogs slow down as they age. Then I analyze the two diets and find the dog has gone from 400 calories a cup to 450. No wonder she has gained weight.”

Dr. Freeman has seen the flip side, too. The dog is brought in with unexplained weight loss, and her owners are worried because she’s older, thinking there must be an underlying medical problem. They spend a small fortune in lab tests to find out what’s wrong, only to learn, finally, that the cause of the problem is the dog’s having been switched to a senior diet — unintentionally going from eating 400 calories per cup to 350.

The bottom line: forget the gimmicky wording in large, fanciful type. For your adult dog, no matter what her age, choose a food that the Statement of Nutritional Adequacy states is for “maintenance” or “all life stages”; try to find one that has been through actual feeding trials and is made by a well-known, reputable manufacturer; and then rest assured that you are feeding your aging pal the best diet research can stand behind. 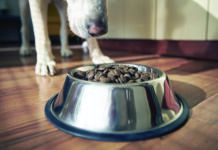