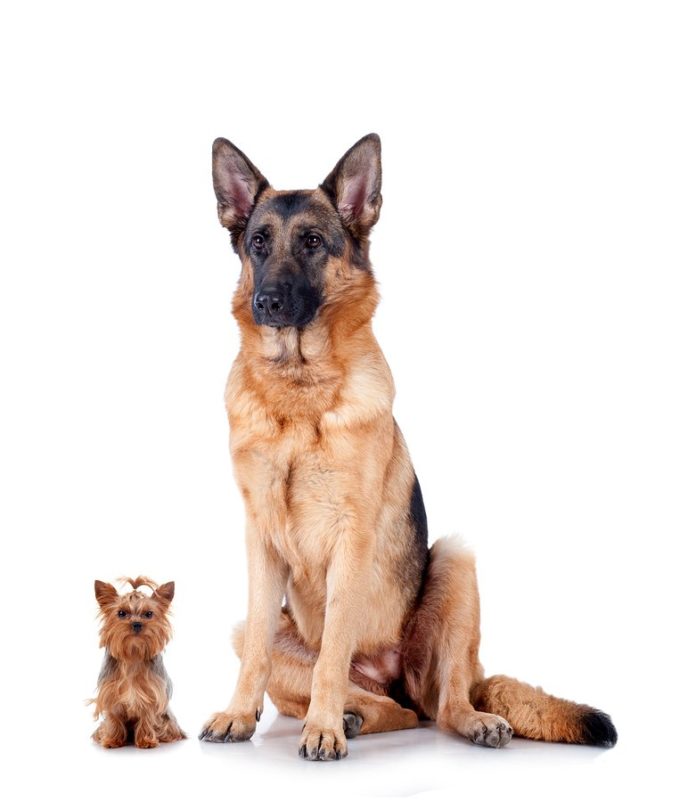 For years, the Statement of Nutritional Adequacy in small print on bags and cans of dog food has had the same wording about “complete and balanced nutrition,” with additional wording to indicate whether the food was for puppies, adult dogs, or pregnant or lactating bitches. In the case of puppies, the wording had to say “for growth” or “for all life stages.”

But that didn’t solve the problem of whether the food was meant for puppies who were going to become small or medium-size adults or dogs who would grow into large or even giant-breed pets. It’s no small matter.

Puppies who will grow into large dogs have a narrower range for calcium intake that is safe for them in terms of best skeletal development than do small and medium-size dogs. For puppies in general, a range of 3 to 6.25 grams of calcium for every 1,000 calories of food is sufficient for proper growth and maturation of bones. But the range for large breeds should be 3 to no more than 4.5 grams of calcium per 1,000 calories, making the acceptable range for them significantly tighter. “Large-breed puppies can’t regulate how much calcium their bodies absorb and use from food as well as smaller puppies,” says Tufts Cummings School veterinary nutritionist Deborah Linder, DVM, DACVN. “Studies have shown that if they have too much calcium, they’re much more likely to have skeletal problems that fall under the umbrella of developmental bone disease.”

It’s counterintuitive because people tend to associate more calcium with better bone health. But calcium has to be in balance, and for pups, too much of it could mean, among other things, that the bones in the body fail to grow at their proper rates, become too thick, or perhaps too thin. That predisposes a dog to conditions like arthritis and attendant joint pain in the future.

Because of the same concern about proper bone development, the calorie density of food for large-breed puppies should also be different from that of kibble for smaller dogs. “Studies have shown that if a large-breed pup grows too fast” because of too many calories, Dr. Linder says, “her bones can develop in odd ways that predispose her to joint problems” capable of plaguing her for life.

How the new labels will simplify matters
Food formulated for large-breed puppies is not new. It has been on the market for at least a decade. But there was no standard for how it should be labeled. A package often just said “large breed puppy food” on the front in big letters. Such labeling wasn’t regulated in any way, and consumers had no assurance that the calcium and calorie levels really were in the right range for puppies that would grow into large dogs.

Now, new guidelines out this year say that manufacturers of food that is formulated for large-breed puppies need to make that clear on the Statement of Nutritional Adequacy. It will take up to two years for manufacturers to change their labels, but when they do (and some manufacturers will most certainly start sooner, even though the rules give them 24 months), the wording in fine print on packages of dog food that are for “growth” or “all life stages” will include one of the following two phrases:

Seventy pounds is not so much a scientifically determined cutoff point as a common sense one. It’s not as if a 69-pound dog is a medium-size pet and a 70-pound one is large. But for all intents and purposes, 70 pounds works as a dividing line that will insure virtually all growing puppies their best shot at nutritional, and therefore skeletal, health.

That means that not only giant breeds like Newfoundlands, Greater Swiss Mountain Dogs, and Great Danes should have food intended for large dogs but also many Labs, Golden Retrievers, and other dogs whose adult weight will end up north of 70 pounds, even if they will not become super-large.

Note: If you have both a small- or medium-breed puppy and a large-breed puppy at the same time, it’s okay to feed both of them the puppy food for large breeds. Smaller dogs can handle the narrower calcium range in the large-breed foods. It’s just that large-breed puppies don’t do well on the relatively high calcium concentrations in some foods formulated for small and medium-size dogs.

When to switch to food for adult dogs
All puppies should be fed food for “growth” or “all life stages” until they turn one year. That’s true no matter what their ultimate size. But giant breeds should remain on puppy food for an extra six months or so, until they turn a year and a half (or however long it takes for them to reach their full adult size). Its lower calorie density will allow them to reach full skeletal maturity more gradually. That’s key because giant-breed dogs who grow too quickly are more prone to all kinds of orthopedic diseases, including the all-too-common hip dysplasia.

What’s the calorie difference in puppy food intended for large breeds and puppy food intended for smaller pets? Unlike for the calcium range, there’s no specific regulation for the calorie density of food meant for large-breed puppies. That said, “they do tend to be lower in calories than puppy food in general,” says Dr. Linder. Thus, if you happen to feed food meant for large-breed pups to one who will be small or medium in adulthood, you may have to feed a little more to make sure her calorie intake keeps pace with her energy requirements. Those who are concerned should read the fine print of the nutrition statement carefully and choose the puppy food that matches what their smaller dog’s adult weight will be.