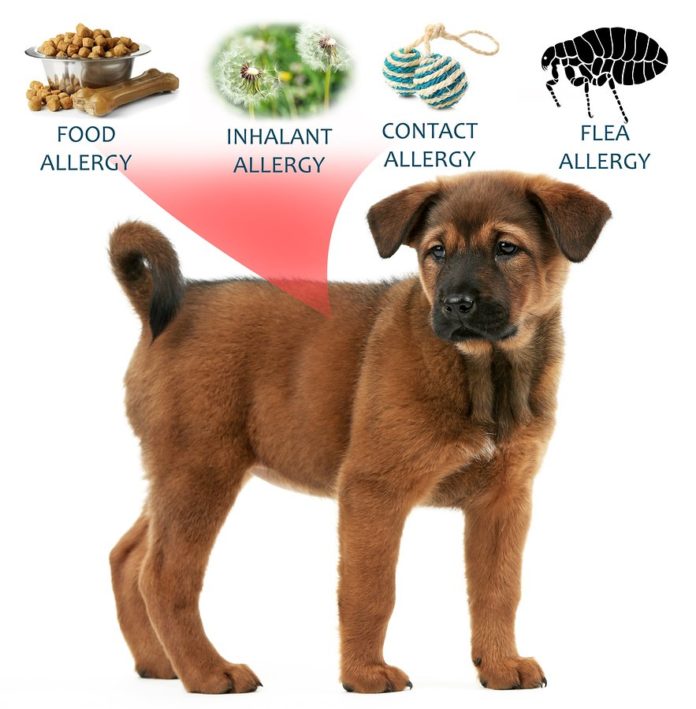 While people who suffer from allergies frequently get runny noses, watery eyes, sneezing, and congestion, dogs with allergies often itch. And that itchiness is sometimes accompanied by gastrointestinal symptoms like vomiting or diarrhea. Thus, owners assume their pet has a food allergy. They switch from diet to diet in an attempt to weed out the offending substance that’s causing the nasty symptoms, trying grain-free, soy-free, and other types of foods but not really seeing any improvement in their dog’s symptoms. Why is that?

It’s because fewer than 10 percent of dogs with an allergy are allergic to a specific food. Much more common is an allergy to an airborne substance in the environment, such as pollen, mold, or dust mites. These allergies, too, can cause GI discomfort and attendant symptoms, even though it doesn’t seem like they would.

Thus, if your dog keeps scratching to relieve itchiness, before removing one or another ingredient from his diet, consider bringing him to a veterinary dermatologist to see if he has an allergy to an airborne substance, which is called atopy. If he does, the dermatologist may prescribe a medicine that he will need to remain on indefinitely as well as recommend certain medicated shampoos.

If the dermatologist comes up empty, then it might be time to see a board-certified veterinary nutritionist who can work with you effectively on eliminating one ingredient at a time to try to find the offending substance. It’s a long process. She or he will remove one food item for four to 12 weeks, making sure it is not in any treats or flavored medications. If the symptoms subside, it’s a pretty good bet that the culprit has been found. If not, the veterinary nutritionist will move on to removing another ingredient, and so on. When the offending food appears to have been identified, it will be reintroduced back into the dog’s diet. If he immediately starts having symptoms again, you can feel confident that the allergen has been “collared,” and it can be kept out of your dog’s diet from then on.

Most likely, if your dog has a food allergy, it will not be to grains. It will be to some kind of meat. Allergens are usually proteins, and while meats are relatively rich in proteins, grain-based items are not.

Note that sometimes a dog does not have an allergy to a particular food but an intolerance. An allergy is an immune system issue; an intolerance might have something to do with the gut. Some dogs, for instance, simply feel better on less fat. But that doesn’t mean they’re allergic to it.