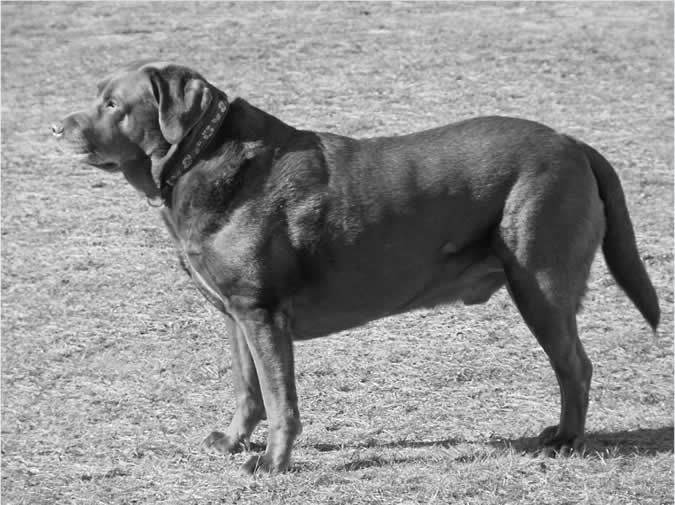 Kim and Dave Rossi couldn’t figure out what they were doing wrong. Their two chocolate Labs, Buster and Dutch, kept gaining weight no matter how much they cut back on the dogs’ food. The couple was particularly confused because they had chosen the food very carefully, paying attention to marketing claims that it was high quality and also giving the dogs powdered supplements to add to their nutrition. The one thing “we didn’t know,” Mrs. Rossi says, “was the calorie content” of what “we were feeding them.”

The Rossis just knew that their dogs “started getting beefed up. So we cut back, but still they kept putting on weight. We felt like we were starving them to death, but they weren’t getting any lighter.” And it wasn’t because the Rossis were giving their pets a lot of between-meal treats that they weren’t counting. “We were conscious about what we were feeding them,” Mrs. Rossi says.

Buster, in particular, was paying a high price for carrying around extra pounds. “Dutch is a high-energy dog” no matter how much he weighs, comments Mrs. Rossi. “We can run him for two hours straight, and he’s ready to run again immediately. But Buster was slowing down tremendously. He didn’t want to play, he didn’t want to run. He wasn’t interested in too much of anything. The most he would do is swim, so we’d take him down to the river. But even that would take coaxing sometimes.”

The tipping point came when the Rossis brought Buster to the hospital at Tufts Cummings School of Veterinary Medicine because he had a mass on his right paw that had to be removed. The doctor who performed the surgery “suggested that we enroll Buster in the university’s Obesity Clinic for Animals,” Mrs. Rossi recounts. “We weren’t thinking in terms of ‘obese,'” she says. But that was indeed the right word for it. Buster was up to 97 pounds and Dutch, 93. Both dogs should have weighed in the neighborhood of 75.

Dr. Linder weighs in
Deborah Linder, DVM, DACVN, head of the obesity clinic, was able to figure out the problem pretty quickly. The Rossis were feeding their dogs a brand of food that was “loaded with calories,” as Mrs. Rossi puts it — on the order of twice as many calories per serving as the dogs needed. The company does a great job of advertising its product as high in nutritional quality but doesn’t disclose calorie content. With all those excess calories, “we were decreasing Buster’s life expectancy without realizing it,” Mrs. Rossi says. She’s right. Research indicates that overweight dogs live, on average, two years less than those at ideal weight.

Dr. Linder gave the couple a list of options for food brands that would help their pets slim down, and the Rossis chose one that would allow each dog to have four cups a day — a reasonable volume — because the food is high in fiber, which helps fill the Labs up. Today, Buster weighs 72 pounds and the ever-energetic Dutch, anywhere between 75 and 77. Better still, Buster “now acts like a puppy” again, says Mrs. Rossi. “It’s a huge contrast. You get him outside and he starts spinning in circles. He wants to run. He wants to catch the ball. He wants to play. It’s like two different dogs — night and day. And he looks so much better. He looks fantastic. It’s an unbelievable change. It’s great because we were so worried. We just wanted to do the very best we could do. Little did we know that what we had been doing was detrimental for a long, healthy life.”

In truth, the situation at the Rossi household is unusual. Much of the time, it’s not a straight nutrition problem that causes a dog to be overweight — too many calories in the food chosen — but a psychological, or at least an emotional, issue arising from something going on in the family dynamic.

A fear that the bond is at stake
Often, what makes a dog overweight is something about the nature of the relationship between the pet and various members of the household. Food becomes currency for love, for closeness, and a dog’s human family may not want to risk damaging that closeness by withholding food, treats in particular. “Providing treats is a central component of many pet owners’ relationships with their…dogs,” Dr. Linder writes in the journal Veterinary Clinics: Small Animal Practice. In addition, she adds, pet owners have actually “expressed guilt or fear of depriving their pet of food as a rationale for not engaging in weight loss plans.” If two or three people living in the same house as the dog are worried that depriving the pet of food means depriving him of love, that can amount to an awful lot of calories doled out in the name of affection.

Dr. Linder relates the story of one family who came to see her with an obese dog that “everybody wanted to be the one to feed.” And with three teenage daughters in the house, there was a lot of feeding going on. “It was important to each member of the household to have that special relationship with the dog and provide something that was special to him.”

In another case, a woman told her it was very important that her dog have a doggie ice cream every night, something like a Frosty Paws. “It was actually adding quite a bit of calories,” Dr. Linder reports. “It would take up the entire treat allowance for the day,” but the woman, whose dog was grossly overweight, insisted that giving her dog that nightly treat was “‘one thing I will not change. You can change anything else you want, but not that.'”

Preserving the bond
In both households, Dr. Linder had to dig deeper — and come up with solutions that would allow each person to keep her bond with the dog intact. In the home with the three teenage daughters, where it turned out the dog was getting three times the amount of calories that would allow him to remain at a healthy weight, she gave each family member a way to have a connection with the dog that would be hers and hers alone. “One of the girls became in charge of walking the dog,” she explains, “while another became in charge of one of his meals, and the third, in charge of the other meal. In that way, the bond was preserved for everyone.”

Dr. Linder also created a food allowance box for the family to solve problems of what she calls logistics and communication. That way, everything the dog was supposed to eat throughout the day went into that box — meals and treats. “So when the box was empty,” Dr. Linder says, “the box was empty.” There couldn’t be a scenario of one family member inadvertently going outside the desired calorie range. In addition, when the family filled the box the night before, it helped them to see that their pet did indeed get quite a lot of food — just in many portions throughout the day.

In the household with the woman living alone, “I tried to inquire whether it was the ice cream itself,” Dr. Linder relates, “or whether it needed to be something cold or something to lick. I asked the woman, “‘Do you have ice cream with him?’

“It turned out the woman’s husband had died. She used to read in bed with him every night. The dog then started to take his place. He would lick the ice cream slowly while she read, and it became a nightly ritual to replace the old one she had had with her husband. That was the key — not the ice cream itself. The dog needed something he could enjoy that wasn’t very quick to eat — something to lick at for a while as the woman read.

“We found a great substitute,” Dr. Linder says. “The woman took some of the dog’s canned food and froze it — he still had his frozen treat, but without going outside his calorie recommendation. It was part of his regular diet.”

A better outcome than anticipated
While dog owners often start out nervous about “depriving” their pets of food and damaging their close relationship, they find that taking the step of putting the animal on a sound weight management regimen makes him happier than ever, just as the Rossis saw with Buster. Dr. Linder says she can tell people that up front, before the new feeding system begins, but “usually,” she reports, “I find that people need to see that for themselves. As the pet loses weight he is happier — in less pain, more active. When people see those changes in their dog as he really starts to shed excess pounds, it helps with that cycle of positive reinforcement and encourages them to keep going. And that’s when ‘good’ problems start to arise. Owners tell me, ‘we need to keep food off the counter because now he can jump up there when he couldn’t before.’ Or, ‘we need to do something about our fence — he can jump over it now.’ I’ve had a lot of people say they’ve had to restructure their home, dog-proof it a little more, because their trimmer dog has energy to move around that he didn’t have before.

“Families are so much happier seeing their dogs happier,” she adds. “They love seeing their pets more vibrant and bright. They’re proud of themselves in the relationship they have with their pets because they’re able to see that the feeding plan they have put into place has allowed the dog to enjoy life more, not less.”

With anywhere from 35 to 60 percent of pet dogs obese, depending on which piece of research you look at, it’s a point worth keeping in mind.