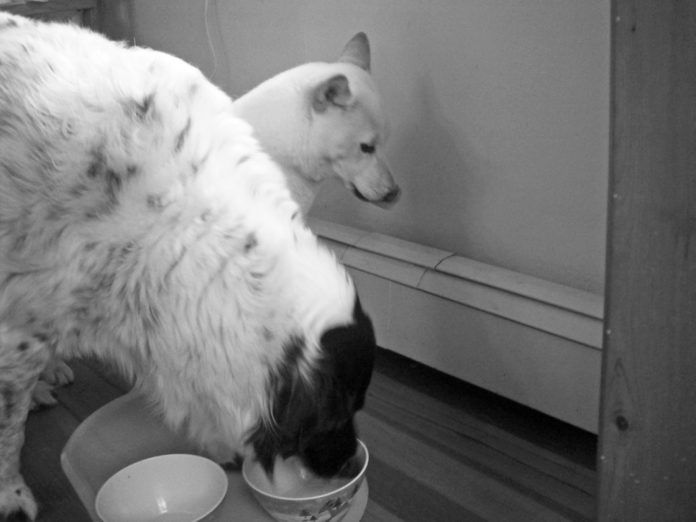 The vet finally told us what we had known for some time but needed to hear. Franklin the border collie, tipping the scale at 62 pounds, was due for some serious dieting. Rosie the shiba inu, on the other hand, was perfectly proportioned at a svelte 28 pounds.

The doctor gave us specific instructions about what brand of food and how much of it to feed to Frankie each day, some in the morning and some at night. Rosie could continue eating as she always had. But how was it going to work? The two had always dined side by side, munching as much as they wanted from the bowls we left down for them.

We’ll watch them eat, we thought. When we see Frank going for Rosie’s food we’ll say, “Unh unh unh” and shoo him away before he scarfs down her kibble along with his own.

Yeah, right. A couple of months later, when we brought the two dogs back to the vet for a weigh-in, Frank had gained 5 pounds while Rosie had lost 3, laying bare the truth we were trying to deny: Franklin is the Ernest Borgnine of our family and Rosie, pencil thin, is the Audrey Hepburn.

There was no point feigning surprise. For Franklin, to bastardize Shakespeare, all the world’s a tiny piece of cheese you get for performing a trick. Rosie couldn’t care less about cheese and other treats, or even meals, for that matter. We get her to perform tricks by throwing a ball to her. A less food-motivated dog you never saw.

Okay, but how to get Franklin to eat the amount of food he’s supposed to eat — and keep him from getting at Rosie’s? That’s where Tufts board-certified veterinary nutritionists Cailin Heinze, VMD, and Deborah Linder, DVM, come in — on page 11 of this issue. It boils down to some tough love: setting rules for mealtimes rather than leaving the bowls down all day, keeping Franklin separate from Rosie while they eat, and various other measures that would be killing us if we had the fortitude to institute them.

But institute them we must. Solid research shows that healthy-weight dogs live two years longer, on average, than their overweight brethren. And we’d like Franklin to be here begging for food as long as possible. I don’t know who’s going to whine more about the new measures — Franklin or me. Dr Heinze says owners need to get past their own trepidation about doing what’s necessary — and what’s best for the dog. And anyway, she adds, dogs take the changes much better, and much more quickly, than we think they will. I guess she’s right. I just wish I could run under a table and put my paw over my forehead.