You’ve had both of your dogs for more than 5 years, and now one of them has been diagnosed with a disease that requires medical nutrition therapy in the form of a change in diet to keep her condition from deteriorating as quickly and even extend her lifespan. So now all of a sudden, your two pals, who have at least sometimes eaten out of each other’s bowls and shared the same table scraps and other treats, have to be considered differently when it comes to food. How do you broker this change?

Changing the food. Tufts veterinary nutritionist Deborah Linder, DVM, says that in a lot of cases, she is able to prescribe what she calls a “compromise” food. It might not be ideal for both dogs but will do the trick for the pet with the health condition. This allows the household to adjust without turning itself upside down.

An example would be a low-sodium diet for heart disease. All the dogs in a household can go on a low-sodium diet, whether or not they need it. True, it might not taste as palatable as a diet with more salt, but it will mitigate the symptoms of disease for the pet with the heart problem. Also, both dogs might accept the food better knowing that the menu simply has changed. It’s easier than feeding two different diets since you can’t explain to the dog who requires less sodium why, even though it doesn’t seem fair, you’re giving her a different food for her own good.

Weight management food for an overweight pet can sometimes be given to both dogs, too. Kibble to help a dog lose weight tends to have fewer calories per cup because it has more bulk in the form of non-caloric fiber to help hungry animals feel full. But you can often just give a dog with an ideal body condition more of the same food. The extra fiber that’s common in many weight-loss foods isn’t going to hurt. She’ll just need more trips outside for “toileting,” as will the overweight dog. Check with your veterinarian though, because if you need to feed the already-thin dog a considerable amount more than the label recommends, you may be providing too much of various nutrients. It’s all a balance.

Changing the environment. Sometimes, the same diet for both dogs simply isn’t going to work. For instance, let’s say one of your pets has kidney disease. At some point in the course of the disease, she is going to have to go on a therapeutic diet (one you can get only by prescription through a veterinarian) because it is restricted in nutrients below what’s needed for a healthy pet. There’s no getting around it because a typical amount of some nutrients (for example, phosphorus or protein) taxes the already compromised kidneys, and reducing the consumption of that nutrient can slow the progression of symptoms.

But a healthy dog absolutely cannot eat the restricted diet, too. A deficiency in phosphorus, for example, can lead to such problems as incoordination, anemia, and bone pain. (A dog with kidney disease on a low-phosphorus diet is at risk, too, but it’s a tradeoff made to extend her life.)

So what do you do?

No more ad lib feeding. Leaving out the dogs’ food bowls and letting them eat whenever they feel like it isn’t going to work. The possibility of the dog with kidney disease getting into the food with a normal amount of nutrients — and vice versa — is just too risky. The dogs have to learn to eat as soon as their meals are put in front of them because the bowls are going to be picked up in a few minutes whether they have eaten or not. (Fortunately, this is not a problem for many dogs.)

Consider physical barriers. If you don’t want to stand there and make sure each dog eats the right food, you can ensure that your two pets dine separately. One way, if your dogs are two different sizes (or if you have a cat and your dog likes to eat the cat food), is to create a door within a door that one pet can slip through and the other cannot. Making sure one of the dogs cannot get through the doggie door means never having to worry that she will make her way to the wrong food.

Baby gates also work well, Dr. Linder says. That way, the two pets can be near each other and see each other while eating but can’t get to each other’s food. It allows them to remain social without dietary danger.

Walk one dog while the other is eating, then walk the dog who has already eaten after putting down food for the one who has already gone for her walk. That precludes all possibilities of a mix-up.

You don’t need to be super-strict in every single case. For instance, it’s not going to be the end of the world if an overweight dog occasionally gets into higher-calorie food. But for a dog prone to a condition like pancreatitis, which is a severe gastrointestinal problem sometimes caused by too much dietary fat, sometimes “you can trigger an attack with just one wrong meal,” Dr. Linder points out.

In such cases, she says, firmness is key. Yes, you want to be indulgent, but not at the expense of your dog’s health and safety. 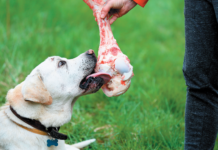 Back to the Raw Food Diet Debate 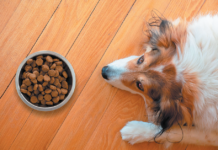 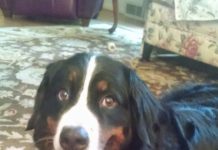