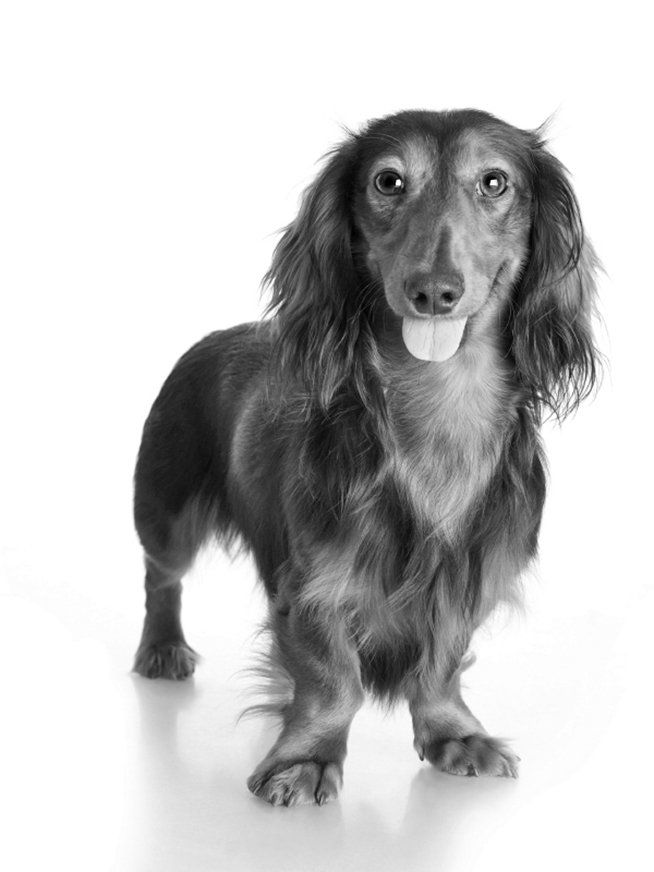 A lot of people feel conflicted. On one hand, they love a particular breed, or breeds. Maybe it’s the silky feel of an Irish Setter’s hair, or the sweet temperament of a Havanese, or the goofy readiness to play of a Lab or Golden Retriever.

On the other hand, they’ve come to understand that because the gene pool within a specific breed is fixed, or finite, purebred dogs keep passing down deleterious genes that compromise health. It’s why, they argue, German Shepherds are relatively prone to developing hip dysplasia, while Yorkshire Terriers fall victim to collapsing tracheas, and Bernese Mountain Dogs to a cancer of the lymph system known as histiocytic sarcoma.

Some also point a finger at the American Kennel Club, accusing that organization of promulgating problems among certain breeds by virtue of the standards for their conformation: the pushed in faces of Pugs that cause breathing difficulties, for example.

But Jerold Bell, DVM, director of the clinical veterinary genetics course at Tufts and a researcher in the fields of genetic disorders and the epidemiology of defective genes in purebred populations, says such thinking, while it has dogs’ best interests at heart, is misguided. “The most commonly seen genetic diseases in dogs are seen with equal frequency across purebred and mixed breed dogs,” he points out. These include hip dysplasia, epilepsy, hypothyroidism, allergies, certain cancers (lymphoma, hemangiosarcoma, and osteosarcoma), patella luxation (a trick knee that pops out of place), cataracts, elbow dysplasia, and inflammatory bowel disease. In other words, breeding a purebred dog to a mutt, or mixed breed dog, is not in itself the solution for decreasing the risk for health problems in the next canine generation.

In addition, Dr. Bell states, the standards for most breeds “don’t call for the excessiveness that’s out there” in terms of such things as flattened muzzles and over-angulation. In the United Kingdom, he says, the Kennel Club stepped in to say that Pekingese must have a defined muzzle in order to cut down on breathing difficulties in the breed. “But no one ever said a Pekingese shouldn’t have a defined muzzle,” he points out. “People on their own often breed to extremes without any dictate from the kennel clubs.”

That’s not to say that certain inherited disorders aren’t more prevalent in certain breeds. They are, as Dr. Bell freely acknowledges. And in some cases, the way breeds are defined may need to be reconsidered to give new generations a better chance at good health. For example, he says in his book, Veterinary Medical Guide to Dog and Cat Breeds, spotting in Dalmatians is tightly linked with a recessive gene for abnormal metabolism of the amino acid purine, predisposing the breed to bladder stones and a skin condition. Likewise, the breed-defining ridge on Rhodesian Ridegbacks is linked to the genetic disorder dermoid sinus, a serious skin condition, while the thick and wrinkly skin of Shar Peis is genetically linked to periodic fever syndrome, characterized not only by flare-ups of fevers but also by bouts of inflammatory skin lesions.

Despite the difficulties, however, the answer, Dr. Bell says, is not to get rid of breeds altogether and let all dogs mate by chance, come what may. One reason is that such a drastic solution isn’t called for. Consider, for instance, that a breed-sanctioned mating between a Dalmatian and a Pointer in 1973 introduced the normal purine metabolism gene to the breed, and now, 12-plus generations since that mating, breeders have shown that they can have traditional Dalmatian spotting with normal purine metabolism. In other words, there may often be a fix for an entrenched genetic problem.

Furthermore, trying to do away with breeds simply wouldn’t work in doing away with genetically-based conditions. “Many defective genes are ancient,” Dr. Bell points out in his book, “and their existence preceded the differentiation of breeds.” That’s why genetic diseases are common to all dogs, purebreds and mixed breeds, even though they may concentrate in certain breeds. Some faulty genes simply run in the species. “The whole idea that purebred dogs are unhealthy and mixed breed dogs are healthy is a misnomer,” Dr. Bell says. “I see as much genetic disease in mixed breed dogs in my clinic as in purebred dogs.”

What, then, is someone looking for a dog supposed to do? Is it all a game of Russian Roulette, with everyone who chooses a new dog taking his or her chances that the dog will be okay — and living with the consequences (and paying for and agonizing over them) if it is not?

If you choose your dog at a shelter or from a rescue group, which is a perfectly reasonable, even laudable, way to go about bringing a new pet into your family — after all, so many dogs need homes, and too many healthy dogs continue to undergo euthanasia each year because there’s no one to care for them — you’re probably not going to be able to find out ahead of time what diseases or other compromising conditions your new pet might develop down the line. You won’t know anything about the dog’s parents or other near relatives, so you won’t have any way of making a health prediction. That’s okay. For as long as you love that dog and give it the best attention and care you are able, you are affording him a much better — and probably longer — life than he would have had otherwise.

But if you buy your dog from a breeder, someone who purposefully mates two dogs to produce a certain breed or to create a designer dog that’s the issue of two different purebred dogs, perhaps a Goldendoodle, there are steps you can take to protect yourself from ending up with a pet that has a high chance of developing an illness for which his breed, or either parent breed, is known. Specifically, you can ask the breeder for documentation of health testing of the dog’s parents. Basic examinations of the eyes, heart, hips, elbows, patellas (knee caps), and thyroid should be done on every breeding dog prior to mating. There are also a number of genetic tests breeders can have performed with a simple sample of blood or saliva to see whether their dogs are prone to a condition for which that breed is known. There are other kinds of tests that predict future health as well.

For instance, while Dachshunds are more prone to disc problems than many other breeds, the fact is that only 16 percent of Dachshunds — one in six — develop herniated discs as they age. One thing a breeder should know is whether a Dachshund puppy’s mother or father, or grandparents, developed herniated discs, or whether any of the dog’s siblings or half siblings did. Dachshunds without a family history of herniated discs are less likely to suffer herniations themselves.

As for Pugs, there are specific measurements that can be taken of a dog’s nostrils and trachea to see whether breathing problems will develop, or be passed down. The nostrils on a Pug need to be at least one third the width of the nose, and the trachea needs to be a certain diameter when compared to the dog’s third rib. It can be seen on an x-ray, and “radiologists know exactly how to make the measurement,” Dr. Bell explains. All too often, he notes, “people are just saying, ‘I got a pug, you got a pug, let’s breed a pug.'” That’s irresponsible, he maintains. These measurements should be taken before a dog is put into a breeding program, and the dog should not be bred if the measurements do not pass the test. “Dogs and cats are the only domestic animal species where the majority of breeding animals are selected without any regard for genetic health. Health testing is quality control. It is not an option, but an ethical obligation to the puppies and the families that purchase them. You’re not going to have healthy offspring if you’re not breeding from healthy parents.”

Consumers should not just take breeders’ word for it that a dog’s parents have been tested genetically or gone through some other testing, Dr. Bell says. “If the documentation is not there for both of a puppy’s parents,” he comments, “you are not buying from a health-conscious breeder.” And by extension, you are aiding in the practice of keeping a particular health problem at unnecessarily high levels within a particular breed.

Along with making sure to have dogs tested for their potential to pass down various ailments to their offspring, breeders should not engage in what is known as popular sire syndrome. Overuse of a popular sire skews the genes of his breed in a particular direction, and that reduces the diversity of the breed’s overall gene pool. Once you lose genetic diversity within a breed, you risk concentrating something unwanted within that breed’s genetic code.

Doing the Research on Your Dog’s Inherited Health

Responsible breeders rely on genetic registries to see whether a dog they want to use for breeding has a clean bill of genetic health or to add one of their own dogs to the registry in the interest of getting information about genetic susceptibility out there. These registries can also aid potential pet owners who are considering whether to take home a particular puppy. Following are descriptions of some of the largest canine health registries.

The Orthopedic Foundation for Animals (OFA) maintains the world’s largest registry of health test results for dogs, with more than 1.5 million results on everything from hips, elbows, patellas, tracheas, and eyes to hearing, heart exams, thyroid tests, dentition, and DNA tests. It can be combed through by owners, perspective owners, and breeders for information on the genetic test results for individual dogs. It is like a “Facebook for Animals,” Dr. Bell states in his book, “each dog with its own Web page and information.”

The Canine Health Information Center (CHIC), was established by the American Kennel Club Canine Health Foundation and the OFA. It tells what particular genetic health screenings a dog should have depending on his breed. Dogs become CHIC-certified by completing the genetic tests, regardless of the test results. “CHIC certification is about health consciousness, not health perfection,” Dr. Bell says.

The Canine Eye Registry Foundation (CERF)﻿is the old eye registry that veterinary ophthalmologists replaced with the OFA eye registry in 2012. All CERF exam results are now in the OFA registry. It shows only normal eye examination results on dogs examined by veterinary ophthalmologists, or abnormal results if released by the owner. If a dog you want to know more about is not listed on the site, it doesn’t automatically mean his eye exam wasn’t normal. He very well might not have been tested. But if the dog is of a breed that is prone to vision or other eye disorders, a “pass” on an eye exam gives you a green light.