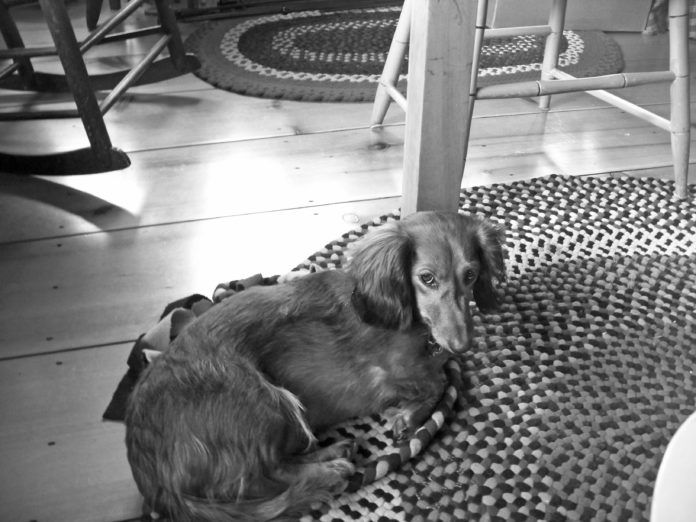 Joyce Halloran let her dog, Sasha, out as she always did — they live in the country on a very quiet road. But she became concerned when the 3-year-old dachshund didn’t come when called, as usual. “I got in my car and drove up the street — no dog,” Ms. Halloran says. “Worried, I went back in the house, then out again, and there she appeared in front of the door to the dog pen. I could tell she was in shock, stunned. She didn’t move much.

Response to Bite Wounds on A Dog

“I put her in the car right away and drove her to the emergency room near my house. They said her body temperature had gone way down, and they weren’t sure they could save her. I didn’t know I had blood on my hand until the doctor’s assistant said something.”

Apparently Ms. Halloran was in shock, too. Sasha was bleeding on the side of her neck and had multiple wounds on her chest area. “She was bleeding from the chest wounds, too,” Ms. Halloran says, “but not profusely.” It was the neck that was the problem, with a hole so big she was actually breathing through it.

Had Sasha been hit by a car? Attacked by an animal? “It could have been a fisher cat,” Ms. Halloran says. “And my neighbor has seen coyotes in his yard.”

The emergency veterinary service kept Sasha overnight, stabilizing her temperature, but called Ms. Halloran in the morning to say her heart stopped and that she was gone. “Then they called again a half hour later to say her heart started again,” Ms. Halloran relates. “They had a bandage around her neck where the wound was, and once they removed it, she started to breathe once more.”

At that point the veterinary service told Ms. Halloran to take Sasha to Tufts, 35 minutes away, where “they said they would try to save her but weren’t sure they could,” Ms. Halloran recalls.

Once the dog was transferred to Tufts, John Berg, DVM, the editor-in-chief of Your Dog, happened to be the Tufts surgeon on call. He wasn’t surprised that Sasha’s wounds were on her neck and chest. “Commonly what we see is dog-on-dog trauma,” he says, which he suspects was the case with Sasha. “It is almost invariably big dogs that attack little dogs,” to the point that vets call such cases a “big dog little dog.”

“The bite wounds are commonly on the back of the neck and the chest,” just where Sasha’s were, Dr. Berg says. “An animal’s instinct to bite the neck is for a reason,” he comments. “You could really kill another animal that way.

“Commonly, the big dog stands over the little dog for the attack, often rolling the little dog over onto its back. Then it bites the underside of the neck, the abdomen, and the chest. We see one or two of these a week. Most are fairly minor. A severe one like Sasha’s we might see once a month.”

Sasha had two big tears in her trachea, or windpipe — one on either side, along with lots of smaller holes all around her neck. “She was breathing really hard when she got here — actually breathing through the holes in her neck, taking in air that way,” Dr. Berg says. “Whatever bit her got really deep in.” And the bite wounds on her chest caused a condition termed a flail chest. The damaged area sank in as she inspired and went out as she expired — the opposite of what it should be. “There was so much trauma there,” Dr. Berg reports. “The way her skin was billowing in and out when she breathed was like a bullfrog. You could see straight into her chest. Her normal chest wall was completely torn.

“We took her to emergency surgery,” Dr. Berg recounts. “If there are just little holes in the skin, we’ll probe them with a small instrument, and if they don’t seem to run deep, we don’t explore” with an operation. “But if we think there has been penetration of a body cavity, we’ll do an exploratory surgery, then stitch up any internal tears.

“In general, we’re a bit more worried about internal damage in the abdomen than the chest, because the chest is well protected by the ribs, whereas the abdomen houses all the soft structures of the gastrointestinal tract like the liver and intestines, with no barrier around them.” But Sasha’s chest, which contained her heart and lungs, was so clearly compromised that a surgical exploration was necessary. As far as the trachea, says, Dr. Berg, “we hoped we could repair it. If we found too much trauma or too many missing pieces, the dog could die. She was lucky to be alive even at that point. She could have easily died before she got here.”

Fortunately, it was found in the operation that while Sasha’s lungs had bruises on them, they as well as her heart were intact. Dr. Berg sutured her chest wall and repaired the huge tracheal tears. Altogether she needed about 50 stitches — a massive number for such a small dog.

Warding Off Infections in A Dog’s Wounds

Along with worrying about internal damage from bite wounds, veterinarians consider the potential for infection. “There are huge numbers of a lot of different bacteria in a dog’s mouth,” Dr. Berg says, and any one kind can cause an infection in the bitten dog. In fact, as soon as a tooth penetrates another dog’s skin, the wound becomes contaminated with foreign bacteria. If those bacteria colonize and grow to a number that the dog’s body can’t kill with its immune system, “you get the pus and lethargy and all the other signs that the contamination has turned to an infection,” Dr. Berg explains.

Compromised tissues resulting from a bite wound are more vulnerable to infection than healthy tissue, Dr. Berg adds. “They may not have their normal blood supply,” he says, which can hasten an infection’s development. And internal infections can leads to sepsis — infections that compromise the entire body and can potentially become life-threatening.

Another source of infection is the bitten dog’s skin. “The skin is bacteria-ridden,” Dr. Berg says. “Despite everything we do to shave it and prep it before surgery, you can’t reliably get off all the bacteria residing there.

“It’s something we always worry about in dogs with severe bite wounds,” he says. How to make sure infections don’t take hold and overwhelm a dog’s body? “One school of thought says any bite wound should be explored surgically and flushed. We think exploring even minor bite wounds overshoots the mark,” Dr. Berg comments. “But we instruct owners to watch for signs of infection in pinprick type wounds: a change in wound color, a change in the color of the skin in the surrounding area, development of a small bump, or drainage, like pus oozing out. Even the dog acting sick may be a sign.

“Typically,” he says, “if an infection is going to occur, it will probably happen around day two, three, or four. If an owner gets to day seven with no signs of a problem, the dog is probably out of the woods.”

Just to be on the safe side, the vet almost always puts a dog on antibiotics prophylactically after a bite wound. “But to provide antibiotics for every possible type of bacterial infection would be hard to do,” Dr. Berg says. “That’s why we tell owners to watch for signs of infection even with the dog on an antibiotic regimen. If necessary, we can culture the bacteria in the lab to make sure we prescribe an antibiotic that will kill them off.”

Fortunately, Sasha never developed an infection. “This dog was lucky to survive,” Dr. Berg says. The goal in her chart for the day after the operation was to “wake up from sedation.” But wake up and survive — and thrive — she did.

“Sasha is fantastic,” Ms. Halloran says. “She came through beautifully. She’s kind of a rescue dog. She belonged to my daughter, who came for a weekend, when Sasha picked up fleas — probably in the backyard. My daughter said, ‘I can’t have this dog in my house with fleas.'” So Ms. Halloran took care of the fleas — and never gave Sasha back.

Joyce Halloran did right by her dog not to try to treat her herself when she found she had been injured. That would have just wasted precious time. The thing to do when you have a clearly injured dog is what vets call “scoop and run,” rather than try to treat her. Just wrap her in a towel to protect yourself from being bitten by the animal, who is in pain and may be scared or disoriented; get in the car; and get to the vet. That’s your best chance for saving her.