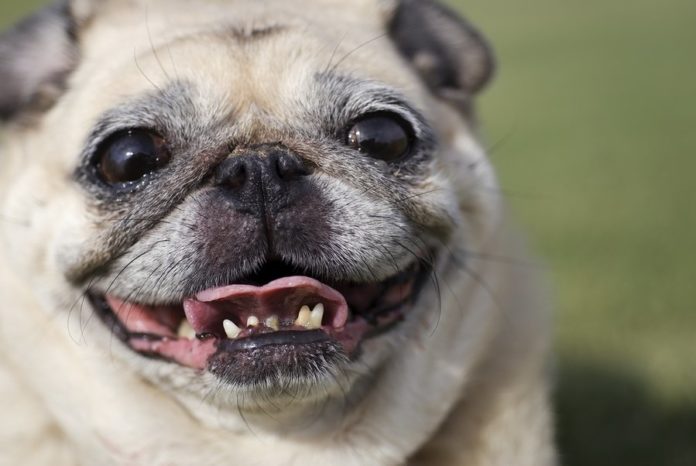 “We never do orthodontics for cosmetic reasons,” says Tufts veterinary dentist Jean Joo, DVM. “You’re also not going to see the railroad tracks you might see on a teen or pre-teen,” she says. “Dogs have chewing behaviors that people don’t,” she explains, “so it would be hard to keep that kind of orthodontic appliance on their teeth.”

Then what kind of braces do dogs get? More importantly, why do they get them?

The reasons a dog would get braces

A dog would make a candidate for braces if he had what’s known as a malocclusion causing trauma— his upper and lower teeth don’t line up properly when he bites, which in turn causes trauma to various part of the mouth. “It’s not about whether a dog can chew his food,” Dr. Joo says. “Dogs don’t need to chew, really. Even toothless dogs eat food with no problems.”

Rather, it’s about skeletal abnormalities — usually a lower jaw that’s out of whack.

“The most common type of malocclusion we see that requires orthodontic treatment is mandibular brachygnathism,” explains Dr. Joo. It means the lower jaw, or mandible, is really short. (“Brachy” comes from the Greek for “short” or “brief,” while “gnathism” comes from “gnathos,” Greek for “jaw.”)

What happens with this condition is that a dog’s lower canines — the pointy teeth — hit the hard palate at the roof of the mouth instead of lining up in between the incisor and canine on the upper jaw whenever he bites. “They’re sharp enough that they can drill a hole into the palate,” Dr. Joo says. “A dog can actually develop an oronasal fistula — a hole that connects from the mouth up into the nose. The dog then ends up continually getting food into the nose and developing chronic nasal infections.” At the same time, the poking of the teeth into the palate “is really painful,” Dr. Joo explains. “It’s a gash that’s constantly happening.” Dogs, like people, bite down often for a variety of reasons, not just for eating, so the jabbing goes on all day.

Another bite problem that occurs almost as frequently and causes the same set of problems is called mandibular micrognathism. In that case, the lower jaw is not only shorter than it is supposed to be but also narrower.

A third issue that requires braces is linguoverted canines. The jaw is of a normal length and width, but the lower canines have grown in too close to the tongue — too centrally in the mouth and too straight rather than out at the edges of the mouth, where they are supposed to be. Linguoverted canines are also called base-narrow canines.

The breeds most predisposed to problems with their lower canines acting like sharp, piercing swords on their upper palates are German shepherds and standard poodles. “But any breed can be affected,” Dr. Joo is quick to point out. She had just recently put braces on a springer spaniel when she spoke to us about the problem.

The best time of life to put braces on a dog who needs them is when the adult teeth have come in, usually around 6 months of age. The bone is more pliable then and allows the teeth to move a little faster in the direction you want them to than if you wait till, say, 10 months of age. “We did a 10-month dog once, and it took 3 or 4 months for his teeth to move into the position that they needed to,” Dr. Joo recounts. “If we do it when the dog is 6 months old, it usually takes only 2 months or so. Owners generally know when they first adopt a puppy that something is wrong, so getting the dog to the vet for help isn’t an issue. You can see that the dog’s jaws don’t line up.”

The actual orthodontic apparatus put in the puppy’s mouth is called an incline bite plane that is built out of the same white dental composite used to make temporary crowns for people. “It looks like a little ramp that goes on the upper teeth between the incisors and the canine,” Dr. Joo says — right where the wayward lower canines reach on their way to stabbing the upper palate. But with the ramp, she says, “we’re tipping the lower canines out. Every time the dog bites down, the ramp deflects the teeth outward and forward, building them into a new and better location.” After just a couple of months, the lower canines are right where they’re supposed to be — aligned to slide between the incisor and canine of the upper jaw rather than hitting the roof of the mouth.

This orthodontic solution is actually easier than pulling out a dog’s lower canines. Their roots are about double the length of their crowns (the white part that people see), and removing them requires oral surgery, and sometimes a bone graft.

Leaving teeth in a dog’s mouth by moving them does more than help the dog avoid a complicated surgery. A dog uses his teeth not just for chewing but also for picking up and carrying objects; teeth are to some degree like hands. Thus, saving a dog’s teeth allows him to continue to take things from place to place as naturally and comfortably as possible. Moving saved teeth into the proper position also helps him avoid gum disease down the line. The way the teeth line up with each other has something to do with protecting the gums that help anchor them in place.