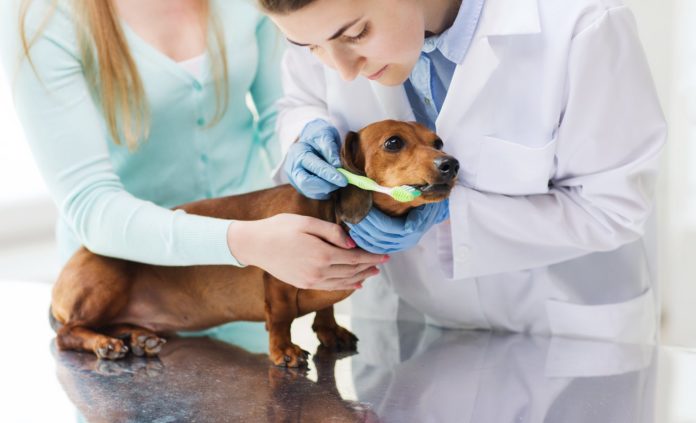 “As effective as brushing.”

“Designed to help clean like bristles on a toothbrush.”

So go just a few of the claims on various treats and other products that imply you don’t have to brush your dog’s teeth to keep them healthy.

For those whose dogs take well to having their teeth brushed, enjoying the poultry, beef, and other canine-friendly flavors canine toothpaste comes in and liking the extra attention from “Mom” or “Dad,” such claims might not be much of a draw. But for owners whose dogs simply hate daily teeth brushing and who can barely lift up their pet’s clenched lips to reach the inside of the mouth, promises on alternative products for teeth cleaning can prove extremely enticing. After all, keeping the teeth clean is critical for preventing gum disease and possible loss of teeth down the line.

There is no shortage of products to choose from rather than send your dog diving under the couch as soon as he sees the toothbrush — not just treats but also wipes and sprays and even flossing toys. But do such items really have what it takes to replace a good brushing?

Unfortunately, no. (See sidebar about canine teeth-cleansing products, opposite.) “It’s brushing that’s most important,” says William Rosenblad, DVM, Head of the Dentistry Department at the Massachusetts Society for the Prevention of Cruelty to Animals’ Angell Memorial Animal Medical Center in Boston and a member of Your Dog‘s editorial advisory board. “The bristles are able to get below the gum line and are best at removing plaque, the soft creamy material that in just 24 to 36 hours starts to harden into tartar — the brown stuff that’s hard and therefore difficult to remove.” Tartar, if not prevented or taken care of once it appears, can cause the gums to recede or lead to bone loss around the teeth. That’s a big problem because gum recession, as with people, is permanent. Once the gums and bone go, the teeth will go, too.

Conditioning a Dog for Having His Teeth Brushed

If you started brushing your dog’s teeth when he was a pup, you likely have no issues. “Most dogs will accept tooth brushing if started correctly as puppies,” says Robert M. Baratt, DVM, a veterinary dentist at Connecticut’s Salem Valley Veterinary Clinic. That is, dogs do well when acclimated to teeth cleaning early in life. But older dogs can get the hang of your serving as their hygienist, too. It just has to be done in a way that introduces the toothbrush to your dog so that he can receive it without protesting.

For a brush-shy dog, “initially, the toothbrush should be used simply to deliver a food treat, such as peanut butter,” Dr. Baratt says. “When the dog associates the brush with a treat, the owner can begin to perform small amounts of brushing.”

Making things easier for novice canine teeth brushing owners is that it’s usually only the outsides of the teeth that require brushing. The insides of a dog’s teeth are brushed by contact with the tongue; thus, generally speaking, you do not need to open your dog’s mouth to get to work. You’ll need only to get under your dog’s lips and brush the outside surfaces of his teeth.

Another sigh-of-relief factor: the brushing needs to happen only once a day, not twice, as with people.

Of course, “flavored canine paste can make brushing more palatable for a dog,” Dr. Rosenblad comments, “and it’s great if it helps you get your dog to cooperate. But don’t use a ridiculously large amount,” he advises, “as the thick, edible toothpaste will gum up the brush and decrease the bristle flexibility.” Soft, flexible bristles perform the scrubbing action that disrupts the film of plaque and its adhesion to the teeth. You also shouldn’t simply put paste on the gum line without brushing. Dr. Rosenblad states that some of his clients have told him they’ve been advised to do just that by pet shop personnel, but again, it’s the brushing action that’s most important.

You don’t have to use a toothbrush made specifically for dogs, especially if your dog does not like it. “You can use a pediatric toothbrush,” Dr. Rosenblad says, so long as it’s soft and has bristles. That said, he points out that “toothbrushes designed for dogs are angled in a way that makes it easier to get to their back teeth. This is especially the case with larger dogs, where the longer handle of the dog toothbrush enables you to reach far back. With the angling, there is also less poking a dog in the nose because of the easier maneuverability.”

Dr. Rosenblad also comments that any soft, bristled brush is preferable to using a piece of gauze wrapped around your finger, which won’t allow you to get below the gum line. “This is why I don’t like the rubber brushes that you place over a finger — you don’t get below the gum line as well as with bristles from a toothbrush.”

Of course, if your dog has already developed “significant plaque and calculus buildup,” Dr. Baratt says, “a professional cleaning should be performed prior to instituting home hygiene.” An oral examination of your dog is usually enough for your veterinarian to make an assessment and decide if a professional cleaning will need to be performed with your pet under anesthesia. (Dogs do not sit still and “open wide.”)

Sometimes, even before your dog’s oral exam at the vet’s office, you’ll get a clue at home that something’s amiss. If you notice that your dog is responding to brushing with pain, it could be an indication of dental disease — broken or loosened teeth, for instance, or a tooth with an infection that has abscessed.