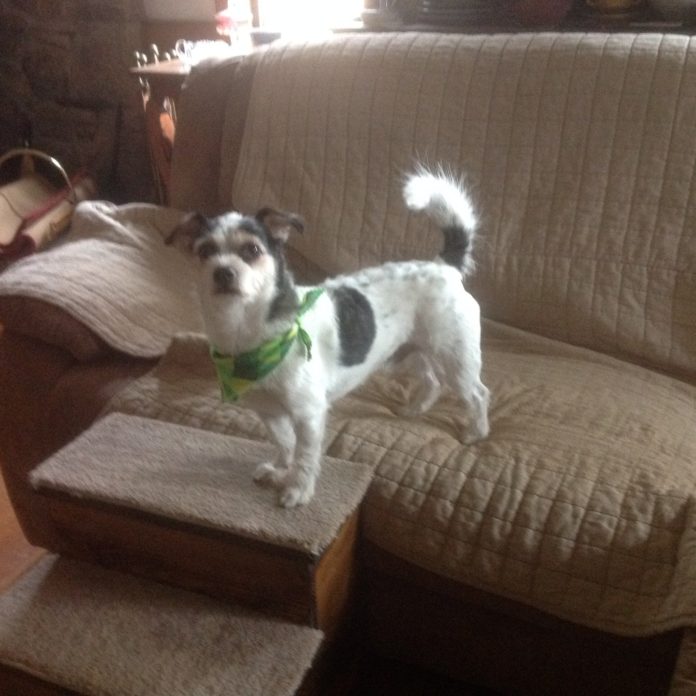 Julie Hellner of Ash Flat, Arizona, is more than a little concerned. Her seven-year-old Jack Russell-shih tzu mix, Maxwell, has had a condition called cherry eye on and off for the past four to five years. The name comes from the fact that cherry eye is characterized by a rather large reddish mass appearing on the eyeball.

Maxwell gets it in both eyes, and while it usually goes away within a day or two, Ms. Hellner worries that it will affect his eyesight down the line. She has read that surgery should be avoided as a way to correct the problem and in the meantime has read on the Internet that Visine helps. She wonders whether the condition is related to stress since it comes and goes.

The whys and wherefores of cherry eye
Dogs, unlike people, have three eyelids instead of two, and when the tear gland of the third eyelid prolapses (slips forward), popping out of position, it protrudes from behind the eyelid as a reddish mass. The problem is seen primarily in young dogs — Maxwell started getting it when he was only about two or three — and tends to occur in cocker spaniels, Lhasa apsos, poodles, beagles, bulldogs, and, finally, shih-tzus, which would explain part-shih tzu Maxwell’s affliction.

It is unlikely that stress plays a role, says veterinary ophthalmologist Nancy Bromberg, VMD, MS, DACVO, who practices at VCA SouthPaws Ophthalmology Service in Fairfax, Virginia. Rather, sometimes allergies can cause the gland to become inflamed and enlarged, which pushes it out of position.

Fortunately, despite its rather awful-looking appearance, cherry eye is not painful. But the longer the tear gland is exposed, the more likely it will become irritated and inflamed — and the more likely a dog will start rubbing at his eye, causing the gland to bleed or become infected. Worse still, if exposed for long periods of time, the tear gland’s function could become compromised.

That’s key because the gland of the third eyelid is responsible for 40 to 50 percent of the normal production of tears that keep the eye properly lubricated. Without proper functioning, dry eye can result. That is uncomfortable and needs to be treated with topical medications several times a day for the rest of the dog’s life. Even with those medications, dry eye over time can decrease vision due to scarring of the cornea combined with pigmentation (the cornea is supposed to remain transparent) and corneal ulcers.

Treatment options
If the third eyelid’s gland pops out and remains out, then surgery is very much recommended. The gland needs to be repositioned so that dry eye doesn’t occur.

The procedures used to correct cherry eye vary depending on the surgical preference of the ophthalmologist. One common procedure is called a pocket technique. It’s not possible to put the gland back in its original position in the third eyelid, so the doctor makes a new pocket near the original position with a surgical incision. The tear gland is then tucked into that new pocket, which is sutured so it won’t happen gain. Another commonly used procedure tacks down the gland to the orbital rim. Either way, post-surgical inflammation takes a week or two to clear up.

Unfortunately, no surgical procedure is 100 percent guaranteed, and sometimes additional surgery is necessary.

Fortunately for Maxwell, surgery is elective in his case since the gland in each eye pops back into position within a day or two. His owner is right to consider topical lubricating preparations for those times that his glands do prolapse. Ocular decongestants, like Visine that can “get the red out,” should not be used. They are irritating to the eye and constrict the blood vessels, so the inflammation is masked, says Dr. Bromberg.

Instead, she recommends GenTel, Systane, or other over-the-counter lubricating drops. Additionally, corticosteroid medications including Bacitracin, Neomycin, and Polymixin B with Hydrocortisone or Neomycin, Polymixin B, and Dexamethasone help decrease inflammation and swelling. Corticosteroid-containing medications require a prescription.