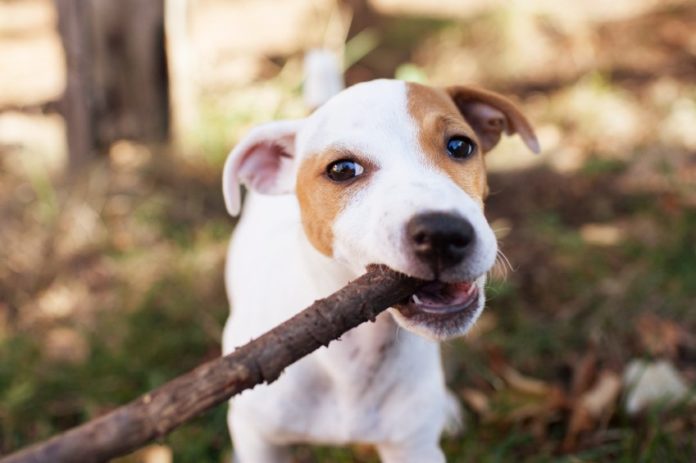 You’d think if a dog chewed a stick into a million pieces, as some like to do, the pieces would get ground up in his GI tract and that would be the end of it. But once in a while, a splintered-off piece of stick doesn’t even make it into a dog’s throat, let alone his stomach or intestines. Instead, the splinter wends its way into the lining of the animal’s mouth — the oral mucosa — and from there begins to migrate. The dog’s chewing, barking, or even panting that makes his mouth move forces the tiny piece of stick to travel not through the bloodstream but directly through tissue to somewhere in the head, or more commonly, the neck. It’s a very serious problem that requires prompt treatment.

Stuck splinter in the neck

When a splinter from a piece of chewed stick makes its way to and then lodges in the neck, it results in what is known as a cervical abscess. (“Cervical” is the medical term for something related to the neck.) It typically occurs in the underside of the neck below the dog’s head — right in the middle of the neck. The abscess — a severe pool of infection deep inside the neck resulting from bacteria on the unclean stick as well as bacteria in the dog’s mouth that never should have reached the neck — causes the dog to fall sick. He ends up with a fairly obvious, fairly severe, firm swelling in the area as a result of all the fluid and pus generated by the infection, and possibly a fever, too. Sometimes the dog becomes reluctant to eat and also exhibits a reduced activity level.

To make certain it’s an abscess and nothing else, “probably the best diagnostic test is an ultrasound,” says John Berg, DVM, Your Dog’s editor-in-chief. “It will reveal a pocket of fluid inside the swollen area, and if we pass a needle into the pocket, we can usually retrieve some of the pus — which confirms that the problem is an infection rather than a tumor.”

The remedy starts with a surgical incision. The objective isn’t to remove the splinter. It usually will have dissolved by the time the doctor sees the dog. It’s to let out all of the pus and also give the doctor an opportunity to flush the area, and lavage, or clean, it with sterile fluid. The surgeon will then insert a suction drain to draw any residual fluid. The drain remains in place for a couple of days, attached to a little bag that the dog has to wear. At the time of the surgery, the veterinarian also takes a culture of the infectious material so that the right antibiotic is prescribed.

“Most dogs do really well after their abscess is drained,” says Dr. Berg. “Once in a while a dog will need a second surgery to fully remove the infection, but that’s unusual.”

Splinter behind the eye

A splinter from a chewed stick that slowly migrates to and then becomes stuck immediately behind the eye can result in what is known as a retrobulbar abscess — “retro” means “behind” and “bulbar” means “globe,” as the eye is a globe. The dog’s eye may protrude, or the owner might notice that it is red and looking irritated. As with a splinter in the neck, the dog may act sick and not want to eat. He could also have a fever and be in a lot of pain around his eyeball. Sometimes, he’ll become very reluctant to open his mouth. When the mouth opens, part of the jawbone moves up and puts pressure right behind the eye, and that could make the pain all the worse.

A CT scan may be ordered to diagnose the exact nature of the problem. “If it’s a young dog that the owner says is a stick chewer, our index of suspicion gets high that it’s an abscess,” Dr. Berg says, “and we might not need the CT scan. But if it’s an older dog, we might be worried that there’s a tumor back there.”

Treatment for an abscess behind the eye sometimes starts just with antibiotics. But if they don’t work, then just like for a splinter in the neck, an incision is made to let out the pus. The incision is usually inside the mouth, right behind the last upper molar, which is immediately below the eye. “That enables us to go right up into the eye and drain the pus into the mouth, as gross as that sounds,” Dr. Berg says.

An abscess behind the eye does not get a drainage tube. “There’s just no good way to put one in,” relates Dr. Berg.

Sometimes it’s not simply a splinter that become stuck but an actual chunk of stick. It may be as much as one inch long. After piercing the lining of the mouth, it will migrate up along the ramus — a portion of the jawbone — and become stuck between the jawbone and the cheekbone. “That can cause extreme pain when the dog opens his mouth,” Dr. Berg says. “This is very deep within the cheek region.

“The challenge,” he adds, “is that it’s difficult to see a stick on a CT scan or an x-ray. It’s what we call radiolucent. Pretty much only an ultrasound will find it. Once a stick is pinpointed, we go in surgically to remove it. Sometimes, if the stick proves difficult to find at surgery, we’ll bring the ultrasound machine into the operating room, put a sterile sleeve over its probe, and scan the incision area to help us locate the stick — something like using a Geiger counter.”

Fortunately, comments Dr. Berg, an actual piece of stick that gets stuck in the head is a rarity. A migrating sliver of a splinter is much more common. “Dogs who chew sticks all the time,” he says, “— it’s probably not the best idea.” n