Home DOG HEALTH AND MEDICINE Coming to a Veterinary Hospital Near You: A Social Worker
Print
Email
Facebook
Twitter 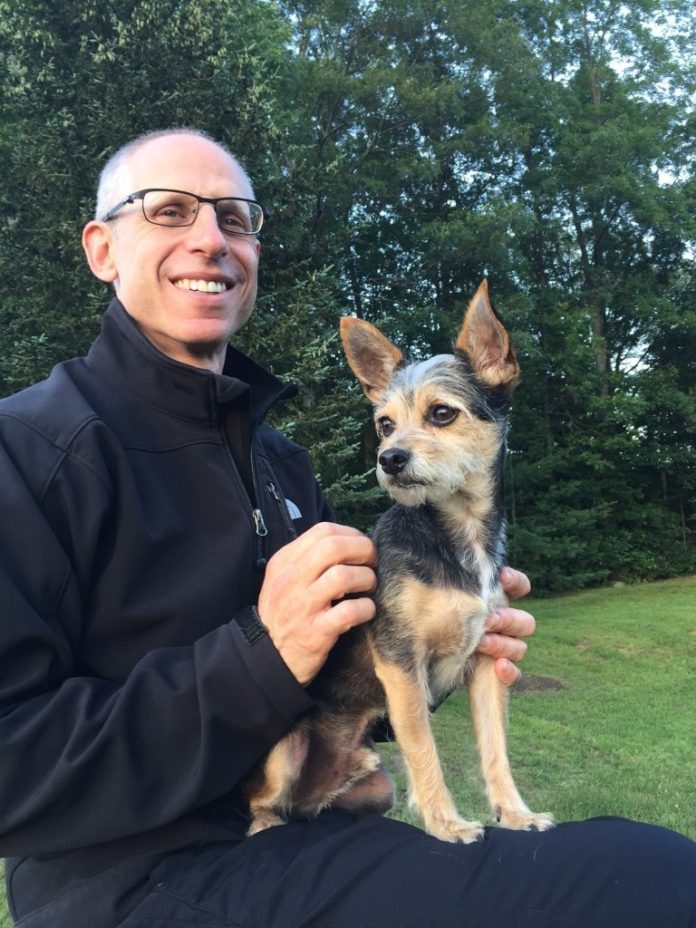 “The man was a Korean war veteran, pretty elderly, but his PTSD was still very severe,” says Eric Richman, MSW, LICSW. “That’s why his Labrador retriever was both a service dog and a therapy dog. The dog’s presence helped keep him calm and able to go about his business. So when his pet became sick — bloody diarrhea — his anxiety level started escalating rapidly. That’s when the dog’s veterinarian asked me to step in.”

Licensed social worker Richman had been at Tufts only about a month when we caught up with him, but already he had a slew of stories under his belt — not just the panicked veteran who didn’t know how to cope with the possibility that his dog was going to die, but also the family with small children whose dog had to be put down suddenly, the woman who blamed herself for not detecting her dog’s kidney failure sooner, and the list goes on.

An interface between social workers and people whose dogs are sick or dying is a trend that’s starting to take off. There has been a small presence of social workers at veterinary teaching hospitals for the last five or six years, Mr. Richman says, but more are signing on, and a large private practice in Pittsburgh has even added a second social worker. Part of the reason for adding social workers to the staff at veterinary hospitals is to support staff and patients. Just like at large hospitals for people, if doctors can spend more time treating patients medically and leave some of the emotional impact of a sick loved one to social workers trained in helping people cope and make better decisions, they can see more patients and devote more of their energy to healing in the way they’ve been trained.

But of course, a social worker also does an enormous job of helping family members deal with a sick or dying loved one, including when that loved one is a pet. “I’ve worked mostly in big teaching hospitals for people over the last 25 years,” Mr. Richman says — “seeing family members through transplants and so on. And a lot of what I do here at Tufts is very similar to the connections made in human hospitals, helping those connected to patients work through grief, loss, guilt, anger when they feel frustrated, and trying to make a decision when presented with various options, none of which is perfect and each of which has pluses and minuses. Always as a clinical social worker, you’re working with people and families on an emotional level. But that’s ratcheted up in a hospital because people are coming in at a high anxiety level dealing with serious illnesses or having to face end-of-life decisions.”

There is no charge for Mr. Richman’s services. Tuft picks up the tab.

On a recent day, he had been dealing with a family wracked with guilt and grief. The mother had let the dog into the backyard, as usual, but this time, the dog got out and started to run across the street. A large truck swerved out of the way in time, but the view of a motorcyclist behind the truck was obstructed, and the dog was hit. The mother scooped up the dog and brought him to Tufts with her kids, a girl age nine and a boy age seven, but he did not make it through surgery. The husband then arrived from work — at this point the family was very traumatized; they had only had the dog for about a year but had fallen in love with him — and the question was whether the children should be allowed to see the deceased dog in the viewing room.

Mr. Richman discussed that option with the parents, and it was decided that the kids were mature enough to make their own decision. Then the conversation was opened up to the children, who started to cry when they saw their parents crying. “That was actually a positive thing in this family unit,” Mr. Richman says. “Seeing their parents sad didn’t unnerve the children but gave them permission to be sad, too.”

The nine-year-old said yes to seeing the dog, while the seven-year-old decided not to see his pet dead. He stayed in the waiting room with his mother while the daughter went inside with her father. “It turned out to be a fruitful experience for her,” Mr. Richman says. “While reticent at first, she went over and hugged the dog, and even gave me a hug, too. I followed up with a phone call several days later, and the family seemed to be doing okay, all things considered.”

In another scenario, Mr. Richman talked to a woman about her guilt for not having picked up her dog’s kidney failure sooner. By the time the dog was diagnosed, more than 75 percent of her kidney function was gone. Mr. Richman was able to explain to her that that happens in many cases because it takes that much loss of the kidneys’ ability to do their job for signs to start to appear — vomiting, dehydration, and an overall feeling of malaise. Only if compromised kidney function is picked up on blood and urine tests before that stage, either during a routine wellness exam or perhaps for a pre-anesthesia work-up before, say, a dental procedure, will an owner know that something is amiss.

Mr. Richman explained all this to the client and also helped her to understand that feeling guilty wouldn’t help but that going into action to keep her 10-year-old pet comfortable as the disease progressed would be very valuable. Steps would include reducing stress, keeping fresh water available at all times, feeding a therapeutic diet, and eventually, administering fluid through an IV drip at home. That the woman learned there was so much she could do for her, both from Mr. Richman and the dog’s veterinarian, made things easier for her.

Sometimes that is not the case. A dog suddenly appears with symptoms that show death is imminent, and Mr. Richman walks the dog’s owner through the decision of whether to choose euthanasia. A lot of people, understandably, want to hold onto their pet for as long as possible, and sometimes it falls to him to explain that choosing euthanasia is a decision that will cause less pain and suffering. “Sometimes I have to point out that by choosing to make the dog live, an owner is going to cause more physical struggling, more pain and suffering,” Mr. Richman says. “That’s not something anyone wants for their dog,” he points out, “and sometimes people need help understanding the right decision might not feel good for them but is the most loving one for the dog who is in unbearable pain.”

Some resist the help — at first
A lot of times a veterinarian will recommend that a client talk with Mr. Richman about the distress they feel over their dog’s illness or death, and the person’s first reaction is to demur. “There can be a stigma attached to anything that smacks of tending to mental health,” Mr. Richman says. For that reason, a lot of clients say, “I don’t need to talk.” They want to buck up on their own. But overwhelmingly, Mr. Richman comments, “if they do decide to talk out their feelings, they say the experience is a very positive one. They are glad for the opportunity to express their emotions, their grief — to open up.”

“Sometimes,” he adds, even the person who ordinarily wouldn’t feel the need to talk with a social worker about their dog could benefit because their pet’s illness is a stress on top of another stress. “Maybe you just lost your mother, or your job,” he says. “Normally, you might have very good coping skills, but the double stress of a sick dog that you have just had to bring to the emergency room [about 75 percent of the people he sees have brought their dogs to the hospital for emergency or critical care] is more than you can bear emotionally without talking out your feelings.”

The Korean War vet mentioned at the beginning of this article was one of those people. Even with his PTSD, he saw himself as a strong and proud man for whom sharing words and feelings served no purpose. But he had also recently lost his brother, to whom he had been close. The thought of a double whammy was too much to bear.

Fortunately, that particular story had a happy ending. It turned out the man’s dog had an abdominal mass that was causing all the diarrhea; it was picked up on an ultrasound. The mass proved benign and in a spot that made it easy to remove. In a few days, when the dog recovered from surgery, he was going to be fine.

While social worker Eric Richman sees dog owners one-on-one at the Tufts Cummings School of Veterinary Medicine to help them deal with crises in terms of medical treatment and decisions about euthanasia, he will also be forming support groups later this year: a pet-loss support group to complement the already existing pet-loss hotline and also an oncology support group, to name a couple. “When people have dogs with cancer,” he says, “they tend to come to the hospital over a stretch of time and will benefit from talking with clients in similar situations during mutual-aid sessions. People will be able to share their own experience in a way that will also benefit others.”

The head of the Tufts Animal Behavior Clinic, Stephanie Borns Weil, DVM, very much sees the value in the client support groups that Mr. Richman will be setting up. “I can’t wait to do reactive dog support groups with him,” she says, referring to people who have difficulty with their dogs overreacting to situations and therefore acting inappropriately, including aggressively. “He will prove a great asset to the Tufts veterinary school community.”