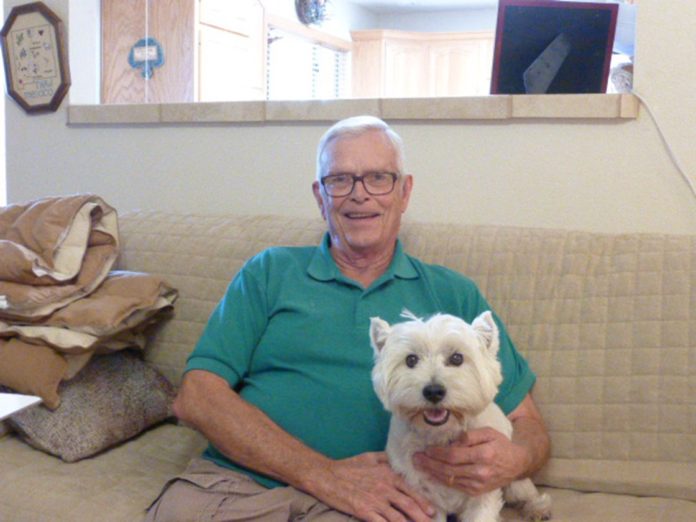 Carolyn and Wayne Vine’s 12-year-old West Highland terrier, Mac, started drinking a lot more water than he usually did, and he started eating quite a bit more, too. “We usually leave kibble down for Mac to snack on when he wants in addition to giving him his regular wet-food meals, and all of a sudden the kibble was always completely gone,” Mrs. Vine says.

Furthermore, she continues, “he used to sleep in bed with us, and a couple of nights, he lost control of his bladder. That was not like him at all. He’d never done that before. I said to Wayne, ‘we’ve got to take him to the vet.'”

The Albuquerque couple’s veterinarian immediately suspected diabetes. The unrelenting thirst, the extra urination, and the extreme hunger are all key signs.

Sure enough, Mac’s blood sugar was through the roof — 442 (milligrams per tenth of a liter of blood), when normal fasting blood sugar for a dog ranges between about 80 and 120.

“We put him on insulin injections right away,” says Mrs. Vine. “Everything seemed to settle down very quickly. His symptoms dissipated almost immediately.”

Granted, “he had lost” weight, she adds — a “pound or so,” which might not sound like much. But it was about 5 percent of his body weight of 20 pounds, and it would have gone down even further if they had not taken him in to have the disease diagnosed so quickly. But that problem, too, was addressed successfully in short order.

“We had to increase his food to twice as much,” Mrs. Vine says, “and now his weight has leveled.”

Still, there was a wrinkle in the treatment.

“I was probably a little more nervous about the injections,” Mrs. Vine says. “My husband was not that nervous with it at all.”

Says Mr. Vine, “I was at one time required to give allergy injections” to someone. Thus, the idea of sticking someone with a needle was not foreign to him.

The veterinarian taught the Vines how to do it easily by making a “tent” out of the loose, floppy skin just behind the scruff of the neck (between the shoulder blades) and injecting the tiny needle there. And “for about the first month, Mac did just fine with the shots,” Mrs. Vine says. “But recently he has gotten to where he tries to hide after eating and cringes when we give him the shot.”

“He is trying to avoid me,” Mr. Vine says. “He will kind of go around by the barn and then head outside. He wouldn’t snap or anything like that. And he wouldn’t run away from me.” He’ll even come when Mr. Vine calls him over for the shot. “But his body posture has been such that I can tell he isn’t real enthused about it,” he says.

“The shot only takes a second,” says Mrs. Vine. “As soon as it’s done, he is loving and happy, and everything is good again. Is there anything that we can do to make the shots less traumatic for the dog?” she asks. “I’m pretty sure it isn’t anything he is sensing from us. My husband gives him the shot in as matter-of-fact a manner as possible considering he has to give it to a cringing dog.”

Mr. Vine begins to figure out the solution on his own
One possibility that can be ruled out is that Mr. Vine might be hurting Mac with the shots. They are subcutaneous injections, just under the skin, with a truly tiny needle. Most dogs don’t even notice that they’re being given a shot. And dogs don’t have needle phobia, so there’s certainly no anticipation of pain on Mac’s part.

“I don’t see any flinching while I’m actually giving him the shot,” Mr. Vine told us. “Four units is all he gets — tiny syringe, tiny shots.”

What, then, could it be? It’s hard to say. But when we caught up with the Vines by phone, Mr. Vine said that in between the time of Mrs. Vine’s e-mail to us and our conversation, he had “tried recently to try to ‘love’ Mac a little bit before I do the shot — just get down on my knees and pet him and tell him what a good guy he is, and in the process, massaging him, then putting up the little tent of skin and then pff — life is good again.”

We weren’t surprised that Mr. Vine intuited the solution: just some extra TLC. Just as our dogs know us, we know them pretty well, too. The shots had simply been making 12-year-old Mac anxious; he felt cautious about the new ritual built into his life, and with some tender handling he was able to start calming down.

To get his anxiety to a one or two, or even to zero, we suggested to the Vines that they might want to consider giving Mac a tiny morsel of beef or chicken just prior to administering the injection and also just after — just to sweeten the deal a little more. They thought that was a great idea and said they would try it, knowing that Mac’s doctor said he could continue to have his usual favorite treats even with the diabetes.

We feel quite confident that this loving, attentive couple will soon fully acclimate their pet to life with diabetes, and to a treatment plan that will let him live his long and natural life span.