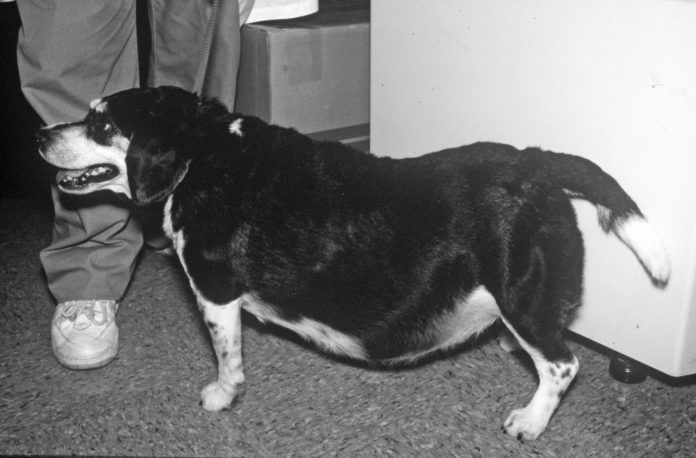 It tends to creep up insidiously. Your aging dog — perhaps he’s already nine or 10 — now seems to be panting more often than usual, even at night. Perhaps he no longer wants to sleep on your bed, either, preferring the cold tile bathroom floor. Or he has developed what appears to be a pot belly and lacks something of his usual energy. It must be aging, you assume. Or, if you notice that your dog wants to keep getting up at night to go out and urinate, you think his bladder is weakening with time, or that perhaps he has diabetes because you’ve also been noticing that he has been seeming thirstier than usual.

But the excessive drinking and urination that’s part and parcel of diabetes “tends to come on a lot more suddenly, like an on-off switch,” says Tufts veterinarian Orla Mahony, MVB, DACVIM. This is more gradual. In fact, Dr. Mahony says, the very slow build of the symptoms is what throws so many people off, leading them to believe that what they’re seeing over time are just signs of aging rather than a disease. Making it more complicated still is that not all dogs get all the symptoms.

But any one of the signs — gradually increased drinking and urination, more panting, a pot belly — should trigger a visit to the veterinarian because together or separately they can signal Cushing’s syndrome, a disease in which too much of the body’s natural steroid, cortisol, is released. The pot belly associated with the condition has nothing to do with weight gain resulting from an age-related slowdown in activity, a belief that understandably throws off some dog owners. It comes from the fact that Cushing’s syndrome causes the muscles to atrophy, so the muscles in the abdomen no longer hold in all the organs as tightly (stomach, intestine, and so on), and the organs push the belly outward. Then, too, says

Dr. Mahony, the liver becomes enlarged, which adds to the abdomen’s pendulous look.

“The muscle weakness can also manifest itself as difficulty hopping into the car,” she adds, “or maybe some difficulty getting onto furniture or going upstairs. A lot of owners mistakenly attribute that to arthritis and other changes they associate with age.”

Other signs may be paper-thin skin, often combined with hair loss. All can be easy to miss, or dismiss, because like the sagging belly they happen over time rather than all at once. But, for instance, “it’s not normal for a dog to have to urinate frequently. Even older dogs should be able to go through the night without needing to be let outside,” says Dr. Mahony.

Treating the disease, while not an emergency, is critical for a dog’s health. A significant proportion of dogs that are not treated for Cushing’s are at risk of dying of complications. Among the most common complications: blood clots that cause strokes or pulmonary thromboembolisms — clots that develop in the lungs. Another complication of Cushing’s is a predisposition to developing serious infections. Cortisol, like other steroids, is immunosuppressive. What might be a minor infection without Cushing’s syndrome can very quickly become a life-threatening condition for a dog who has it (although surprisingly, this does not appear to be a common problem for cushingoid dogs).

Cushing’s is the result of a tumor that develops either in an adrenal gland (there’s one in front of each kidney) or in the pituitary gland that sits at the base of the brain (this is termed pituitary-dependent Cushing’s). An adrenal tumor may secrete too much cortisol, and a pituitary tumor may secrete too much of the hormone that normally signals the adrenal gland to secrete cortisol.

“About 15 percent of dogs with Cushing’s disease have an adrenal tumor,” Dr. Mahony says. “Of those, about half are benign, and half are malignant. The other 85 percent have what is usually a very small benign tumor on the pituitary, called a microadenoma.

Sometimes it can be hard for a vet, just as for an owner, to know up front “what’s age and what’s Cushing’s,” says Dr. Mahony. And the initial tests ordered tend not to be definitive. A vet may suspect Cushing’s when she looks at the results of blood work or a urinalysis or sees that a liver enzyme called alkaline phosphatase is elevated. The doctor will also probably measure cortisol in your dog’s body with a number of different blood tests, but equivocal results are not uncommon.

From there she will go to a definitive test. The most sensitive of those that allow a veterinarian to confirm her suspicion, says Dr. Mahony, is the low-dose dexamethasone suppression test. Dexamethasone is a steroid similar to cortisol. “You give a very small dose of dexamethasone,” she says, “then measure blood cortisol in the dog at three separate points over an 8-hour period. In a normal dog, the dexamethasone would suppress cortisol production — but not in a dog with Cushing’s. At 8 hours, it remains elevated.”

Many veterinarians use imaging tests such as ultrasound, too. That lets them know whether the tumor is in the pituitary gland or one of the adrenal glands, which can affect the mode of treatment.

Treatment may depend on the type of tumor

“If an adrenal tumor is identified,” says Dr. Mahony, “surgery to remove it is a definite possibility. You can consider medications, but sometimes removing the tumor is the best therapy because it can be curative. Without tumor removal, the dog remains on medication for life. Sometimes tumor removal is a necessity” rather than a choice, she adds, “because the tumor appears to be reaching a size that could cause it to invade surrounding tissue, even if it’s benign. Benign only means it won’t spread to other parts of the body. It doesn’t automatically mean it won’t grow.” That said, Dr. Mahony cautions that removing an adrenal tumor is “a big surgery, and it’s risky.” You need to weigh the pros and cons with your dog’s veterinarian.

Removing a pituitary tumor at the base of the brain is also a possibility, Dr. Mahony says, “but in the U.S. it’s rarely done. They remove pituitary tumors routinely in the Netherlands, at Utrecht University, and they’re also doing some pituitary tumor removals at a specialty practice in West Los Angeles, but it’s not yet routine here in this country.”

The upshot: most dogs with pituitary-dependent Cushing’s syndrome are put on medication, as are dogs with the adrenal tumors who are not operated on because of the risks of surgery.

The medication cuts cortisol production. “There are two drugs worth considering,” says Dr. Mahony. “One is mitotane [Lysodren], which has been available for a long time, and more recently we have trilostane [Vetoryl], which has been on the market for just a few years.

Mitosane works by causing death of the outer layers of the adrenal gland and thereby cutting some of the cortisol production, while trilostane inhibits an enzyme involved in cortisol synthesis.” Each has its pluses and minuses.

Mitotane provides more effective control 24 hours a day, “causing tighter control of the disease all the time,” Dr. Mahony explains. “If you have a dog with a concurrent diseases such as diabetes, kidney disease, or heart disease, the Cushing’s could put her over the edge without that tighter control.”

A downside of mitotane is that for it to work, it has to be given at a high dose for a week at the beginning — a loading dose, Dr. Mahony calls it. “And that tends to make dogs a little bit sick at first,” she says. “A dog goes from being cushingoid to non-cushingoid so fast it tends to cause a sort of cortisol-withdrawal syndrome that can be hard on the body, leading to lethargy, weakness, and a lack of appetite, like an overall malaise. Think of someone on the hormone prednisone,” she says, “which is the drug version of cortisol. Doctors have people taper off it very slowly so their bodies can adjust more easily.”

Trilostane, on the other hand, can be started with a low dose, which allows it to work more gradually. And the doctor can tweak the dose more easily, causing a less abrupt decline in cortisol levels. For dogs who don’t need rigid control of their Cushing’s disease 24 hours a day, it might prove the right choice (although it can be more expensive).

“The dog gets better with either drug,” notes Dr. Mahony. “Both are effective and pretty comparable in terms of survival. Dogs with Cushing’s disease who are treated with medication do reasonably well.” Indeed, after a few months on medication, the dog’s energy comes back, as does his hair; the paunch disappears; and he no longer pants or drinks excessively, translating to less of a need to relieve himself. That is, he goes back to normal.

It should be noted that some owners are tempted not to treat Cushing’s syndrome because the signs are less acute than those of, say, diabetes. They’re less alarming, and a dog with the disease often has a good appetite and feels pretty much okay. But treat the condition you must, or your pet may continue to decline until he succumbs.

“Treated dogs tend to live at least a couple of years — they tend to be on the older side to begin with — often dying of something else,” Dr. Mahony says. “Cushing’s is relatively common but rewarding to treat because animals always feel better when it’s tended to. It’s a quality of life issue as well as a life-and-death issue. While not painful, it’s debilitating, making a dog feel weaker. But with medicine or surgery, a dog comes back to himself.”