Home DOG HEALTH AND MEDICINE Does Your Dog Bleed – Or Clot – Too Much?
Print
Email
Facebook
Twitter 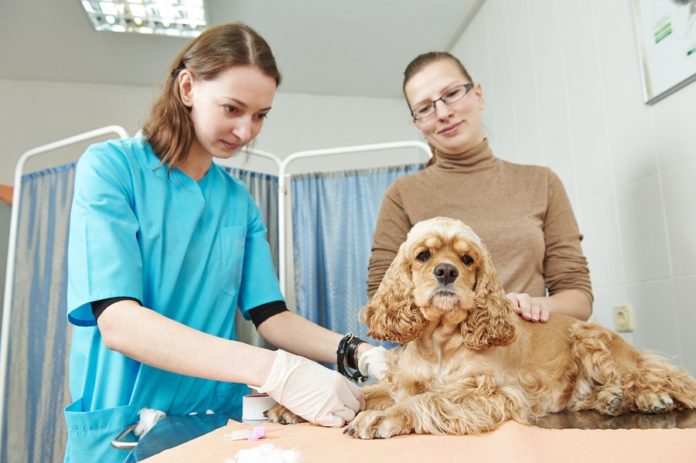 Your very fragile dog is in need of surgery. Or she comes to the emergency room with unexplained bleeding from her mouth. Or she has a kind of kidney disease that can potentially make her blood too “viscous” and not able to flow easily enough; her clotting factors may be on overdrive. In all these cases, and many others, a veterinarian has to run tests of coagulation to see if the blood is too “thin” and making the dog more prone to bleed, or, conversely, too prone to clotting. Even certain cancers, like hemangiosarcoma, which is a cancer of the blood vessels, are associated with bleeding problems. Thus, if a dog is suspected of having it, she, too may be screened to check her clotting factors. And some dog breeds, including Doberman pinschers, are genetically primed to develop a condition called Von Willebrand disease, causing a bleeding tendency. In certain situations, like an operation, they definitely will need to be tested to see if their blood clots at the appropriate rate or whether medical intervention is needed prior to surgery.

Three ways to get at clotting
“When we think of clotting,” says Armelle de Laforcade, DVM, who helps run the Coagulation Lab at Tufts Cummings School, “we think about platelets, clotting proteins, and clot breakdown. Platelets are responsible for what is known as primary hemostasis (“hemo” meaning pertaining to the blood and “stasis” referring to a state of equilibrium, so a kind of blood equilibrium). Clotting proteins are all about secondary hemostasis. And clot breakdown, which is a normal process that occurs once a clot is no longer needed, is called fibrinolysis.”

Platelets, explains Dr. de Laforcade, “are cells in the blood that serve the role of a plug whenever you have a breach in a blood vessel. Their job is to immediately stem blood loss. Their ability to do this is short lived but buys time until clotting proteins [secondary hemostasis] in the blood can form fibrin strands that cross link with the platelet plug and thereby strengthen it. That strengthening equals a clot.”

If a veterinarian wants to screen for how well the platelets are working, she orders a complete blood count, or CBC. A CBC includes a platelet count, which gives an estimate of the number of platelets. A dog with a very low platelet count might ooze blood from her gums and mucosal surfaces, such as the bladder, and might have small red spots on her skin or gums.

It should be noted that even if platelet count is normal, there could be altered platelet function, which might cause similar signs. Unfortunately, “there is no great clinically simple way to evaluate platelet function,” Dr. de Laforcade says.

“A test called buccal bleeding time does provide some indication of whether the platelets in the blood are working as they should.” Little incisions are made both parallel to and perpendicular to the lip line. Blood flow from the incisions is then watched and when blood no longer drips out, the time elapsed is the bleeding time. The normal range is about two to five minutes in dogs. It’s a kind of crude test, though, because it doesn’t get at what’s wrong with the platelets if bleeding does not stop quickly enough.

When it comes to the clotting proteins, which clinicians refer to as clotting factors, they work as a group when helping platelets plug a bleeding area. There are 13 of them in all, and they activate each other in a systematic fashion until a strong, impermeable fabric is woven. The tests used to assess the intricate process are called the prothrombin time (PT) and the activated partial thromboplastin time (aPTT). With PT, blood is drawn and placed in a glass tube, then analyzed either by a laboratory or using a handheld device at the cageside. A prolonged PT time is an indication that there may be bleeding problems. The aPTT test is often run hand-in-hand with the PT and can also be tested after a dog is administered blood thinners to see if she has been given the right amount.

As far as assays of blood to see how well it breaks down a clot — the process of fibrinolysis — “we don’t have great tests,” comments Dr. de Laforcade. There are a few tests, including one called the D-dimer, which are run by clinical pathology labs. But they aren’t very sensitive.

Interestingly, a technique for evaluating clotting ability that is now being used by some universities and larger hospitals has allowed greater investigation of fibrinolysis. “Right now we are noticing that fibrinolysis is enhanced in certain conditions like acute liver failure, and with severe internal bleeding. Greyhounds, which as a breed have a tendency to bleed more than usual postoperatively, may also have abnormally increased fibrinolysis or clot breakdown. If we can be sure that fibrinolysis is altered in some conditions, we can give medications to help that and potentially reduce the risk of bleeding in some patients.