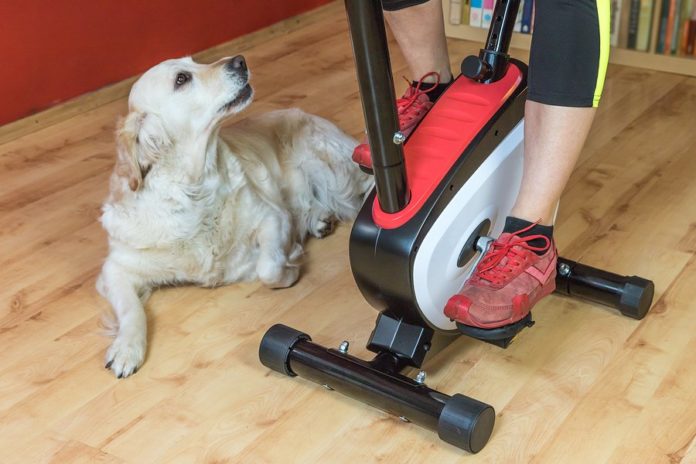 Exercise does more than help keep your dog’s weight where it should be, maintain his cardiovascular fitness, and forestall the frailty that often comes with creeping age by staving off much of the muscle loss that accompanies advancing years and weakens the body. Exercise also contributes to a dog’s good mood, just like it does for people, by releasing serotonin in the brain.

Better still, it strengthens your bond with your pet and makes him more well behaved. That’s because when you’re engaging your dog in physical activity, you’re right there with him — paying attention to him, bonding with him, and keeping him from becoming bored. That makes him feel more in sync with you and more ready and willing to do what you ask of him and thereby stay out of trouble. Dogs are nothing if not social animals — getting along with you is much of their raison d’etre. And when you spend time using your bodies together, it only makes them happier to follow your cues in general.

But just how much physical activity is your dog supposed to engage in? Assuming he’s in good health, it depends on his time of life and his breed.

As anyone who has ever raised a puppy knows, pups have tons of energy — but need tons of down time. In fact, they need less exercise than an adult dog, even though it may not seem that way. They can be playing and running around like rascals one minute, then will literally fall asleep at your feet the next. It makes sense: they’re growing like crazy, and their bodies need lots of rest to mature to adult size.

So the thing with puppies is not to take them on very long walks or engage in a couple of hours of rigorous play (in fact, long walks can be hard on a puppy’s developing bones and joints) but to have short bursts of exercise throughout the day. By “short bursts” we mean just five to 10 minutes at a time. And it doesn’t all have to be outdoors time. Just playing with a puppy counts as exercise. Throw a ball from one room to the other. Have him chase you around the yard — whatever it takes for him to use his body, which he’s itching to do.

Go for a pattern of six to 10 short bursts a day (fewer as he passes six months of age), and you will have given him the amount of exercise — and togetherness with you — that he craves.

Adult (but not geriatric) dogs

An adult dog who is not yet a senior canine citizen can be anywhere from one to eight or nine years of age depending on size (a small dog will not become geriatric until he passes the age of eight, or nine or 10). And for the most part, a two-year-old is going to have more energy that he wants to expend than, say, a seven-year-old. So you’re going to have to gauge his exercise limit for yourself to some degree. But unless your adult dog is in poor physical health, two 20-minute walks daily is not going to cut it.

Consider that dogs from the sporting group — Labs, retrievers, spaniels, setters, and many of the other breeds that so many Americans have — need somewhere between 60 and 90 minutes of vigorous exercise daily to be their best selves, in pursuits like running, playing with other dogs, or taking classes such as agility, flyball, lure courses, and so on. It’s the same for dogs from the herding group, or mixed breeds who have a lot of herding dog in them, such as cattle dogs and sheepdogs, collies, and German shepherds.

If you don’t have an hour to an hour and a half each day for physical activity with your adult dog, you might want to seriously consider putting him in doggie daycare, where he can romp with his kind. Leaving an adult dog alone in the house all day while you go off to work doesn’t just make his body go flabby; it makes him bored to the point of distraction. (See box, right.)

If you’re busy during the week but have more time for your dog on weekends, that’s all to the good. But keep in mind that turning your dog into a weekend warrior — one who engages in strenuous physical activity and sports on Saturdays and Sundays but lies around on week days — will be as bad for him as for you. Letting the muscles, tendons, ligaments, and joints go unused all week and then making them work to capacity on weekends only leads to strains and other injuries.

An older dog requires less exercise than a young adult or middle-aged one — but by no means none. Thirty to 60 minutes a day broken up into two sessions is a good rule of thumb. Two long walks isn’t bad, but dogs, like people, like some variety in their routine, so still consider agility and other classes, or even hikes in places you don’t normally visit. Part of exercising the body includes stimulating the mind — if it’s too “same old, same old,” the dog won’t get as much out of it.

Bear in mind that a lot of older dogs have to contend with stiffness and pain from arthritis. Exercise should never cause or add to pain — if you see that’s the case, curtail the physical activity, speak to your veterinarian about pain medication and other treatments to increase comfort, and consider activity that won’t stress the joints. Swimming is an excellent alternative to walks because it takes weight off the joints while allowing the muscles to get their fill.