Home DOG HEALTH AND MEDICINE If Franklin Can Do It, Any Dog Can
Print
Email
Facebook
Twitter 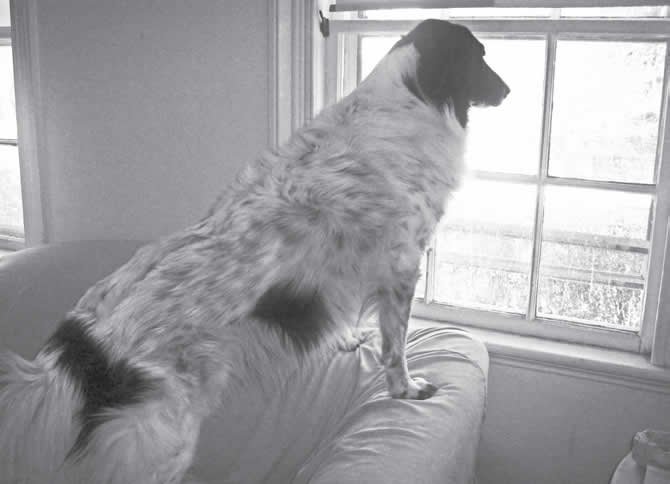 They said it couldn’t be done. Okay, we said it couldn’t be done — me, my wife, and Franklin. Soon after Rosie’s arrival when Frankie was already three years old, he starting packing on the pounds, going from a svelte 49 pounds to a rather astounding 74 in the course of just a couple of years. And there appeared to be no turning the tide.

Whenever we resolved that he would eat less, one of us would cave — usually on the QT. Constance would give him extra biscuits at bedtime, or I’d top his servings of food too generously. Franklin, sly dog that he is, kept us both in the dark, never bothering to say things like, “That’s okay, Mom; Dad gave me extra earlier today.”

It should be noted that Franklin himself never caved, which is to say he never agreed to eat less in the first place. He would continue to look at us beseechingly whenever we were anywhere near the kitchen, or anywhere near food of our own. There was also a lot of insistent, plaintive whimpering on his part, which led to reactions on our part like, “Okay, you can have a piece. Just quiet down so I can finish watching Jeopardy.“

But then the weight gain reached the point that Franklin would literally groan going from a sitting to a standing position. And, bad boy that he likes to pretend to be (despite the fact that he is a goofy nerd), he couldn’t keep up with his buddies playing chase outside.

So we got serious. After talking with the vet we agreed to:
1. Put a measuring scoop in his dog food.
2. Buy high-fiber (and therefore high-volume) weight management food.
3. Give Franklin three quarters of a cup of that food, four times a day.
4. Give Franklin only two tiny 5-calorie biscuits at bedtime as treats.
5. Walk him more.
6. Love him up more.

And we stuck to our guns, fearful at first that Franklin would be miserable. But you know what? He wasn’t. Dogs sense things, and I believe wholly that he sensed we weren’t going to budge from the plan and that it wasn’t worth his trying to shake us from it — which helped us slim him down to his current, much more healthful 56.

We’re so glad we followed through. Although already six years old, Franklin rips through fields and woods like a puppy now (during his almost two hours of outdoor time each day). He’s more alert, more spry in general. And when he does receive a rare food treat, he’s grateful, not pushy about it. It makes him easier to have around the house in general.

We really hemmed and hawed about rationing his food so carefully, thinking he’d be upset. Kim and Dave Rossi had some of the same concerns, as do millions of other owners of overweight dogs. Guilt is a big factor in putting off a weight management plan.