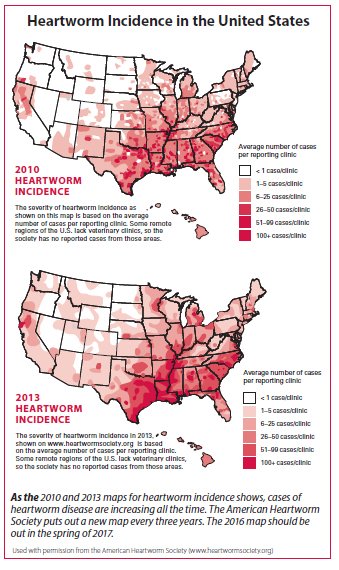 Dogs become infected with heartworms through mosquito bites, so if you live in a climate with cold late autumns and winters, why worry about giving your dog preventive medication every single month of the year?

Because mosquito species are constantly changing and adapting to cold climates, reports the American Heartworm Society (heartwormsociety.org). And some species of mosquito do just fine hanging out indoors over the winter months. Find that hard to believe? Dogs in almost every single county in Minnesota have been diagnosed with heartworm disease. Even just being a couple of days late with heartworm medication leaves your pet vulnerable.

No dog is immune, no matter where it lives. Heartworm disease reaches new regions of the country each year. Mosquitos blown great distances by the wind and relocation of infected pets to previously uninfected areas are two of the factors that contribute to the spread of the illness. Following Hurricane Katrina, in fact, when many of the 250,000 pets that were adopted and shipped to other parts of the country had already been infected, the disease spread with the animals, the American Heartworm Society says.

It has now been diagnosed in all 50 states, with multiple variables, from climate changes to the presence of wildlife carriers like coyotes and foxes, causing the rates of infection to shift dramatically from year to year within any given community. And you can’t tell ahead of time which communities are going to be affected or to what degree.

Just what is heartworm disease?
Imagine a worm that grows up to a foot long. Now imagine dozens, or even hundreds, of those worms inside your dog, where they take up residence in the heart and lungs and their associated blood vessels. If left untreated for too long, the disease causes lasting damage to the heart, lungs, and arteries, affecting a dog’s health long after the parasites are gone.

How does it all happen? Consider that adult female heartworms can take up residence in a dog or other animal and produce baby worms that can’t be seen with the naked eye. Those worms then circulate in the bloodstream. When a mosquito bites an infected animal to nourish itself with that animal’s blood, it picks up baby worms, too, which then mature into “infection stage” larvae over the course of 10 days to two weeks.

Then, when the infected mosquito bites another dog, the infective larvae are deposited onto the surface of the dog’s skin. From there, they enter the dog’s bloodstream through the mosquito’s bite wound.

Once inside the new dog, it takes the larvae about six months to mature into adult heartworms. And once they mature, they can live for five to seven years — up to about half the dog’s life. Because of the worms’ longevity, each mosquito season can potentially increase the number of worms in an untreated dog.

In its early stages, heartworm disease may not cause any symptoms whatsoever. But the longer the worms are there, the more signs there will be. These can include:

But that’s not the worst of it. As heartworm disease progresses, a dog may develop heart failure and a swollen belly as a result of excess fluid accumulating in the abdomen. And a dog with a large number of heartworms can develop a sudden blockage of blood flow within the heart itself, leading to cardiovascular collapse that can prove life-threatening. Called caval syndrome, the collapse manifests itself through the sudden onset of labored breathing, pale gums, and dark bloody or brown urine. Without prompt surgical removal of the heartworm blockage in those instances, few dogs survive the ordeal.

Prevention is key
Because heartworm disease can lead to dire results — and because treatment is expensive (lasting several months) and complicated — prevention, which is so simple, is key.

1. Get your pet tested every 12 months for heartworms.

2. Give your dog a heartworm preventive 12 months a year.

Why is yearly testing necessary if you’re dutifully making sure that your dog is getting preventive medication every single month? It’s not that the medicine isn’t highly effective. It is. But if you inadvertently miss just one month’s dose, your pet can end up unprotected. It doesn’t have to be your fault that your dog has missed a dose. She may spit out a heartworm pill or vomit it up, and if she’s on a topical medication rather than a pill, she could end up rubbing it off.

And even if you give the medication every month but sometimes give it late, you leave your dog vulnerable. Immature larvae can become adults in as little as 51 days. And the preventive medicine cannot work on mature worms.

Testing requires just a small blood sample — it works by detecting heartworm proteins — and can be done during your dog’s routine wellness exam. You don’t have to make a special trip to the vet’s office.

As far as the medicine itself, it can be administered as a monthly pill, a monthly topical, or a twice-yearly injection at the doctor’s office. The pills and topicals are obtainable only by prescription, the idea being that your vet will test for heartworm disease as well as dispense the medication.

If your dog does test positive
The silver lining with this awful disease is that most dogs who get it can be treated successfully. The goal is to stabilize your pet if she is showing signs of the illness, then kill all the adult and immature worms in her system while keeping the side effects of treatment to a minimum. It’s a five-step process, says the American Heartworm Society.

Confirm the diagnosis. Once a dog tests positive on a basic test, you will want to confirm with a second, different test. Because treatment is both expensive and complicated, you want to make sure your dog really needs it before you put her through it.

Restrict exercise. This is a hard one, especially if you have a very active dog whose symptoms are not severe (or absent) and therefore have not slowed her down. But physical exertion increases the rate at which heartworms damage the heart and lungs. The more severe the symptoms, the less activity you should allow your dog to have.

Stabilize the disease. Before actual treatment can begin, your dog may very well have to undergo medical therapy to stabilize her condition. If it’s a severe case or your dog has another serious condition, this part could take several months.

Administer treatment. Once your veterinarian has determined that your dog is stable, he or she will institute a treatment program involving several steps. Dogs with no signs of the disease or mild signs such as a cough usually go through treatment very well, with a good outcome. More severe disease can be treated successfully, too, but there is a greater risk for complications. The severity of the disease does not always correlate with symptoms. You can have a dog with few to no symptoms but many, many heartworms in her system.

Test, and remain vigilant about prevention. About six months after treatment has been completed, your veterinarian should test to insure that all heartworms have been eliminated. And since heartworm disease can occur again (a dog is not immune once she has been through it), you will want to make sure that your pet remains on preventive medication to keep the disease at bay for the rest of her life.