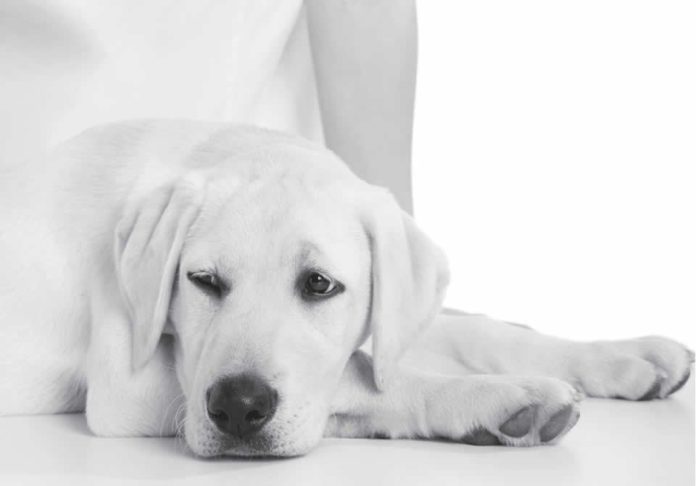 One of the most common things we see is dogs who are brought in with splenic masses,” says John Berg, DVM, a Tufts veterinary surgeon with a particular interest in certain types of cancer. He’s talking about masses that develop in the spleen, the abdominal organ (in both dogs and people) whose major function is to store emergency supplies of red blood cells as well as other components of blood. And the masses Dr. Berg is talking about can be “huge — volleyball-size,” he notes.

These masses cause internal bleeding. An owner will notice that his dog has all of a sudden become weak and may even collapse, or perhaps has a slow trend of lower activity in which she becomes quieter and quieter than normal. The owner may also see abdominal distention, which comes from the spleen bleeding into the abdomen.

The problem for veterinarians is that it’s impossible to tell upon examination whether the mass causing the bleeding is benign and highly curable or a malignant, aggressive cancer. At Tufts it’s impossible to tell at least once a week. That’s how often dogs, almost exclusively large-breed dogs like retrievers and German shepherds, are brought in with a splenic mass.

If it’s benign, it’s likely a hematoma — a large, spontaneously forming clot. The dog can go on to live a normal, healthy life. If it’s cancer, it’s likely splenic hemangiosarcoma, meaning the cancer originated from the blood vessel walls within the spleen. And the prognosis in that case is grim.

Unfortunately, with the two looking identical, “there’s no test we can do to definitively tell them apart,” says Dr. Berg. “Even when we do an ultrasound, we never know for sure which one we’re looking at.” That means owners need to decide about whether to remove the mass via surgery without a diagnosis, as only surgery followed by microscopic examination of the affected tissue will tell what the problem is. If the biopsy reveals splenic hemangiosarcoma, the dog has only months to live, even though the tumor has been removed during the operation. The cancer spreads to other organs prior to surgery in virtually all cases.

Granted, for many owners, two to three more months is a good thing. The dog gets another spring or summer, which the owner finds “very valuable,” Dr. Berg says. And the dog’s quality of life during that time is excellent. Recovery from the operation is quick, and the dog is back to herself literally within days. She’ll be quite healthy until the effects of the cancer turn up elsewhere in the body, at which point the downturn will be fairly rapid and severe. The downturn is most often caused by bleeding within the abdomen, often from the liver, and the decision to order euthanasia will present itself pretty clearly.

On the other hand, for some owners, an average of two to three months is not enough time, especially given the expense of the surgery. They would rather know beforehand which disease they’re facing: the curable one, or the incurable.
Making the decision about surgery more difficult still is that almost 8 percent of dogs who undergo the operation never make it out of the hospital. They die before the biopsy results even come back as a result of severe bleeding from the spleen combined with having undergone surgical anesthesia. An 8 percent chance may be worth it if the dog has a curable hematoma, but perhaps not for those dogs with an incurable cancer.

To make the decision about whether to order the surgery easier, Tufts scientists, including Dr. Berg, are researching ways to be able to tell ahead of time whether the mass they see on ultrasound is cancer or a hematoma.

A new scoring system to help make a diagnosis
The Tufts investigators, led by medical oncologist Kristine Burgess, DVM, Dr. Berg, and others, are going over the records of more than 600 dogs with splenic masses brought to the Cummings School’s Foster Hospital for Small Animals over a 10-year period in order to work on developing a scoring system “that we hope can be used prior to surgery to help veterinarians tell the two diseases apart,” Dr. Berg says. The score for each dog will be based on a number of factors: blood parameters, how big the mass is, how it looks on ultrasound, whether the mass has bled, and what’s seen in the liver during the ultrasound examination. Most often, the liver is the first organ to which the cancer spreads.

“It’ll probably be another six months before we have preliminary results,” Dr. Berg says. “And even then what we have won’t be definitive. What we’re going to be able to do is talk probabilities, not definites. But that will still be a huge improvement. Right now all we know is that roughly, of all the dogs who come in with splenic masses, approximately 50 to 60 percent have splenic hemangiosarcoma. But we don’t know which ones until we get biopsy results back after surgery.”

Hope on another front
Surgery to remove the tumor, whether benign or malignant, is critical to a dog’s survival. In fact, the entire spleen is removed, and that’s okay. Dogs (and people) can live perfectly well without a spleen. That organ has a number of functions, including stockpiling extra red blood cells. But those cells are made continuously in the bone marrow, so the body’s supply remains quite constant, even without a spleen. “We take out spleens all the time,” Dr. Berg says. “There are no important downsides.”

What’s not known, if the tumor is hemangiosarcoma, is whether chemotherapy extends the dog’s life on top of the tumor removal. It is often recommended because the cancer invariably metastasizes, and chemo attacks cancer cells at multiple sites, unlike radiation, which targets just one site. But the data on whether chemo actually does any good have been unclear. Studies have been conducted on only small numbers of dogs, with no control group — a concurrent group of cancer-ridden dogs not getting chemo treatments.

To help cut through the equivocal results, the Tufts scientists looked at more than 200 dogs, some of which had surgery to remove a splenic hemangiosarcoma and some of which had surgery followed by chemotherapy. In research soon to be published in the Journal of the American Veterinary Medical Association, they found that the chemotherapy did extend the lives of dogs with splenic hemangiosarcoma — by twice as much, meaning another couple of months of good-quality time, on average.

“It doesn’t cure the cancer,” Dr. Berg emphasizes. Splenic hemangiosarcoma is one of the top two most aggressive cancers we see in dogs; probably the other is histiocytic sarcoma,” which strikes visceral organs including not only the spleen but also the liver and lungs — often at the same time. “But now we have solid evidence that chemo does impact the disease. What we need to work on going forward is improving our chemotherapy protocols.”

Tinkering with the chemo treatment
Up until very recently, conventional chemotherapy was the only kind of chemotherapy available. The dog went to the vet’s office every two to three weeks for an intravenous injection of a drug that would kill off not only cancer cells but also all rapidly dividing cells in the body: those in the bone marrow, the lining of the intestine, and inside hair follicles, among them. That’s why there are two- to three-week intervals between conventional chemo treatments. The body’s healthy tissues with rapidly dividing cells need time to recover before the next chemo “assault.”

But a new kind of chemotherapy called metronomic chemotherapy, or low-dose chemo, is now available as well. It has a completely different mechanism of action and is thought to work not by preventing cancer cells from being able to multiply and thereby killing them off but by preventing blood vessels from growing into a cancerous tumor and thereby starving it of nourishment. This form of chemo comes in pill form and can be given by a dog’s owner at home in a single daily dose. It’s much less toxic than conventional chemo and also relatively inexpensive.

Interestingly, the Tufts researchers have found that either type works in treating splenic hemangiosarcoma but that “the two in combination work best,” says Dr. Berg. He and his colleagues are now trying to figure out how to combine the two in the most efficacious manner. “Generally, when we have prescribed metronomic chemotherapy to dogs who have had the surgery,” he says, “we have tended to wait a couple of weeks to start it, around the time of suture removal. One possibility we’ll consider looking into is starting earlier — not waiting — particularly because metronomic chemotherapy is so well tolerated.”

Another possibility, says Dr. Berg, is “continuing metronomic chemotherapy indefinitely. We’ve tended to stop it after a period of several weeks. Maybe we can get better results by continuing longer in addition to starting earlier. There’s reason for hope there. Definitely, the fact that we found the two types of chemotherapy did better in combination than either one alone suggests there’s room for improvement, that by tweaking the protocols we can do better.”

Going forward
There’s no doubt about it. Finding out your dog has a splenic mass is scary. And it’s a common finding. “A lot of people have had a dog who died of a splenic mass, or know of someone who did. But there are bright spots,” Dr. Berg emphasizes. And in addition to the facts that many splenic tumors are benign hematomas and that even for hemangiosarcoma, chemotherapeutic agents can extend life further, there is now a new class of drugs that may be able to impact the cancer.

It’s called targeted molecular therapy, and it works via yet an entirely different mechanism — it interferes with cancer’s internal signaling for cell division and proliferation, actually blocking messages to the nuclei of cancer cells to undergo the replication process. Like metronomic chemotherapy, drugs that come under the heading of targeted molecular therapies can be administered by owners at home and also have a somewhat lower risk of toxic effects than conventional chemotherapy. They are already being used for certain types of cancers (in both dogs and people) and will no doubt be applied to more malignancies over time. Eventually, dogs with splenic hemangiosarcoma may be able to live for extended periods after surgery, not just a few months.