Home DOG HEALTH AND MEDICINE Is it Cancer or a Problem with a Neck Gland?
Print
Email
Facebook
Twitter 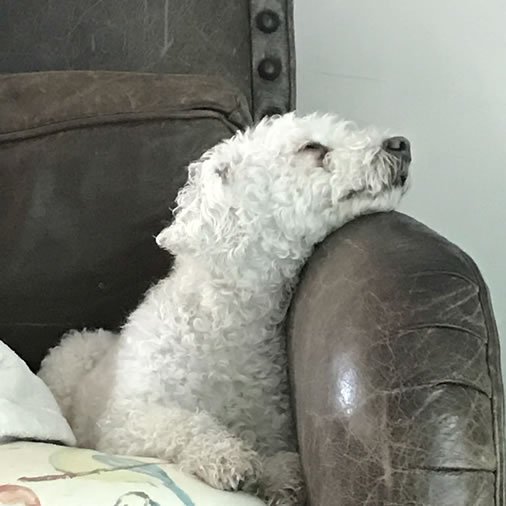 Eleven-year-old bichon frise Cooper was feeling, well, not quite himself — a bit lethargic. His “mom,” Cherylann Hanrahan of Norwalk, Connecticut, was worried that it was her fault. A while back, she had started putting 1/4 teaspoon of crushed eggshells into his food on the advice of someone who told her it would improve his diet’s nutritional quality. Then, when she took him to the vet to see what was wrong with him, he had high blood calcium — 16 milligrams per tenth of a liter of blood as opposed to a healthy 9-to-11.7 milligrams. That made her concerned that she had put some kind of awful chain of events into motion. Egg shells are high in calcium, and the vet said that high calcium in the blood sometimes means cancer.

Ms. Hanrahan, high calcium in the blood is not good, and it can suggest cancer, but you did not endanger your dog’s health by putting a tiny amount of crushed-up egg shells into his food.

What elevated calcium in the blood can mean

The amount of calcium a dog (or person) consumes with his diet is not reflected in the amount of calcium in his blood. It doesn’t work that way. Blood calcium levels, which affect everything from heart rhythm to muscle contractions to the working of vital organs, are tightly controlled by hormones. They have to stay within a pretty narrow range for the body to operate properly and could never be subject to, say, whether the dog had a big piece of high-calcium cheese one day and no dairy snack the next.

When blood calcium levels do go too high, it can be a result of any one of a number of derangements in body systems, but it most commonly means one of two things, says Your Dog editor-in-chief, John Berg, DVM.

1. One possibility is a condition called primary hyperparathyroidism. That means one of the four parathyroid glands in the neck (two on each side) has a benign tumor that causes it to secrete too much parathyroid hormone (PTH), which controls calcium levels in the blood. The more of the hormone secreted, the more calcium that ends up in the bloodstream.

That not only makes the dog not quite himself, it can also cause him to drink and urinate more that normal and can lead to urinary stones, which in some cases can be life-threatening. It works as follows: the high calcium in the bloodstream can lead to formation of calcium oxalate stones in the urinary tract. If the stones make their way to the bladder, that’s not so bad. The dog can urinate around them, and it’s easy enough to remove the stones via an operation. But if the stones end up in one of the ureters (the tubes through which urine flows on its way from the kidneys to the bladder) or the urethra (where urine flows just before leaving the body), they can block urine flow — a problem that may require emergency surgery to resolve.

Distinguishing between cancer and hyperparathyroidism

Sometimes the clinical exam at the doctor’s office comes first, with the veterinarian feeling a lump, or lumps, and sometimes a blood test that looks at calcium levels comes first. There’s no set sequence of tests for making the diagnosis.

If suspicion of one of the two cancers comes first, the doctor will then recommend a fine needle aspirate or biopsy to confirm the presence of cancer, and run a blood test to check for the high calcium levels that can come with those malignancies.

If suspicion is first raised not by a physical exam but by a blood test that shows high calcium (routine blood tests looking at calcium levels are run all the time), the doctor will then feel for cancer with his hands. If he finds evidence of a malignancy, he will next recommend a needle aspirate or biopsy to confirm that cancer is present.

If a blood test comes back with high calcium but no cancer is felt along the body, the doctor will then suspect hyperparathyroidism. That will prompt blood tests to check PTH levels and possibly PTH-rp levels. In a normal dog, if there is too much calcium in the blood, PTH levels should be low to decrease the amount of calcium that goes into the bloodstream. In a dog with high calcium caused by hyperparathyroidism, the PTH is either normal or high, rather than low.

That’s what happened with Cooper. No cancerous lumps were felt when his blood calcium came back high, so the veterinarian drew more blood to see if his PTH levels were also elevated. They were.

Clients’ thoughts about whether to treat either tumor run the gamut, Dr. Berg says, and they have to make the decision that is right for them based on a variety of factors, including cost and also the prognosis, that is, whether the treatment will afford the dog a good quality of life for a good quantity of time.

The surgery to remove the problem gland is relatively simple, and gives the dog back his health — although there is one possible problem that must be checked for during the first few days after the operation. It’s called hypocalcemia, meaning too little rather than too much PTH is secreted, and blood calcium levels fall too low — a potentially life-threatening complication. The reason is that when the parathyroid gland with the tumor overshoots the mark and secretes too much PTH, the other three glands shut down, so to speak. They literally atrophy, or “go to sleep,” Dr. Berg says. And when the diseased gland is removed, it takes them a few days to “wake up” and start doing their job of secreting the hormone again. For that reason, post-surgery, dogs should remain in the hospital for three to five days to be monitored with daily checks of their calcium level. They may be given supplements of vitamin D, which aid in calcium absorption.

Mrs. Hanrahan and her husband were told the ultrasound would cost about $300 and the surgery and its aftermath, another $2,500, give or take, on top of the blood tests that had already been performed. Those numbers gave the couple pause. With three kids in college and no pet health insurance, an unexpected high expense like that would, if not exactly wreak havoc on their budget, make for a considerably tight squeeze. The Hanrahans’ veterinarian told them they did not have to make a decision about an operation right away, that it was not an emergency. Dr. Berg agrees. “Not doing anything is an option,” he says. “But saving up for a few months and then ordering the ultrasound and surgery is a better option.” That way, the dog becomes free from the risk of potentially dangerous urinary stones, whatever malaise he may be experiencing should lift, and he’ll come back to himself.

Unfortunately, the option of waiting soon went out the window. Within a couple of days, Cooper starting vomiting and doing terribly in general — a somewhat rare complication of hyperparathyroidism.

His veterinarian removed the parathyroid gland containing the tumor — the tumor itself was the size of two or three sesame seeds, he told Mrs. Hanrahan — and at the same time cleaned the dog’s teeth and removed two that were loose.

Cooper came through the surgery swimmingly and was sent home with vitamin D supplements.

But, after a few days at home, his family had a big scare. He was twitching all night, Mrs. Hanrahan says, and jumping from window to window and panting. He also wouldn’t eat his breakfast the next morning. These were telltale signs that his blood calcium level was falling dangerously low — a complication that is actually fairly unusual — and a trip back to the veterinarian resulted in his supplement levels being increased.

Today, two months later, that complication is behind him and Cooper is absolutely fine, with a lot of life left in him. Bichons typically live 12 to 15 years, and sometimes even 16. Since he is only 11, the odds are good that that the pet Mrs. Hanrahan calls her “little white fuzzy monkey” will live healthy and happy into the 2020s.