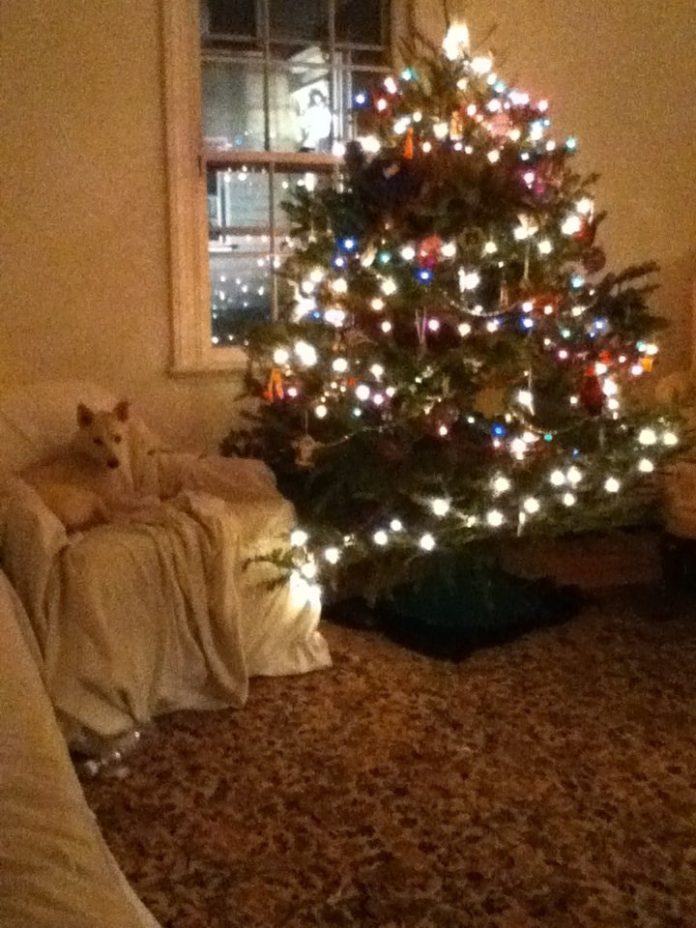 I never told you this, but when we brought Rosie home as a puppy three years ago on December 29th, Franklin, already three years old himself, was miserable about the new arrival. He had adored her on their meet-and-greet at Rosie’s foster home, but he hadn’t banked on getting a “forever” sister. “Send her back,” his demeanor kept saying as she tried to play with him. But that wasn’t the worst of it.

He really began moping. And almost immediately, his stomach began distending and he did not seem to want to eat — which, if he had not been so unhappy, most definitely would have been a Christmas miracle. He also seemed terribly uncomfortable and did not want me hugging him, which I had been doing since we had brought him home years earlier. Within a day or two, his demeanor really took a dive.

We took him to the doctor, who diagnosed pancreatitis. It was a serious case, she said. Franklin had to be put on an IV drip, given extra fluids, and monitored very carefully before returning to solid food and water by mouth. Wow, we thought, the stress of having to share his home and our attention with another dog really got the better of him.

That’s the story we told ourselves for three years — until now. I interviewed Tufts veterinarian Linda Ross, DVM, recently about pancreatitis and learned that stress wasn’t the instigating factor. More likely, it was turkey with gravy, stuffing, sweet potatoes mashed with butter — that is, fatty leftovers from Christmas dinner prepared just days earlier, which Franklin, persistent character that he is, lobbied for very successfully. And we were only too happy to oblige, as we knew that Rosie’s coming was going to change his life and therefore indulged him more than we would have otherwise.

Dr. Ross says that Christmas, Thanksgiving, and Easter, with their fat-laden meals, are high on the list of holidays that lead to pancreatitis in dogs — which, if not treated, can sometimes be life-threatening. More on the varied causes of pancreatitis — and the diagnosis and treatment — starting on page 8.

It should be noted that it took time, but Franklin and Rosie are now the best of friends. Even at the beginning they had lots of moments of closeness, but in large part Franklin was playing the part of tolerant older brother. It took him a while to truly see Rosie as family. Today, they won’t so much as stay in different rooms. They lounge on the couch together, come up to our room together at bedtime for a good night’s sleep, and wake up together at 5 in the morning to bark if a jogger or a dog walker happens by. They even stop in their tracks to wait for the other when one slows down to relieve him or herself.

In other words, bringing Rosie home turned out to be the right decision after all — and Franklin never got pancreatitis again.