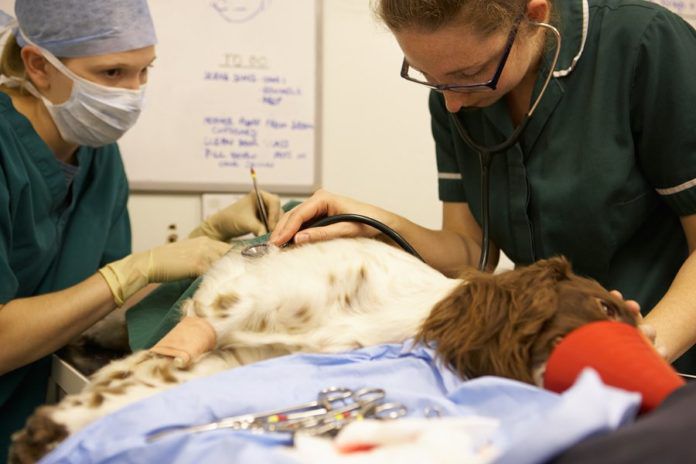 “There are some situations that I’ve personally encountered where standard weight loss — diet and exercise — just isn’t possible,” says Deborah Linder, DVM, DACVM, who heads the Tufts Obesity Clinic for Animals. “One example was a household that had a family member with Alzheimer’s disease. That person could never remember if she fed the dog and kept giving him meals, so in that case we considered medication.

“We ended up not having to prescribe it because this particular person needed to go into assisted living within a few months of the family’s coming to see me. Once she left the household, the dog lost weight very easily” through lifestyle changes.

The medication Dr. Linder is referring to is called Slentrol (dirlotapide), an appetite suppressant approved specifically for dogs that works by helping to create more signals to tell a dog that he’s full. This medication seemed like an easy fix for the widespread obesity problem but is no longer on the market. The company does not say why the product was discontinued other than that it was a “business decision,” but it’s not hard to figure out possible reasons.

It was “very rare” for dogs to be prescribed this drug, Dr. Linder says, in part because “it required a lot of adjusting. People had to come in frequently since as the dog lost weight, dosages needed to be changed to fit the pet’s smaller body size. Frequent weigh-ins were necessary.”

There was the possibility of side effects, too: vomiting, diarrhea, lethargy, drooling, lack of coordination. And, adds Dr. Linder, “safety studies only went to a year — we didn’t know what happened after that. There was some concern about liver changes as well as the absorption of certain nutrients, like vitamins A and D.

Add to that the fact that as soon as a dog stopped taking the medication, “they went right back up in weight,” the doctor says. She also reports, “I’ve heard from other clinicians that pet owners did not like Slentrol even though their dog was losing weight. They were upset that their dog wasn’t enjoying food anymore, which, of course, is exactly how the medication is supposed to work. But people love seeing their dog happy when they give them food, so when the dog turns away from it, it makes owners stop because they feel bad about it.” It’s different from the typical way for dieting a dog, who still loves food and goes to it happily and greedily at mealtime.

With the one drug that has been available giving owners, and ultimately the manufacturer, pause for what seems like a variety of reasons, some have started asking about the possibility of obesity surgery. “This has popped up on my radar screen in conversation with veterinary surgeons,” Dr. Linder says. “Their own clients have been asking them about the possibility of obesity surgery, and they then ask me.”

Would Someone Actually Get Their Dog Obesity Surgery?

“To my knowledge, nobody has yet taken companion animals and performed obesity surgery on them in a traditionally clinical way,” Dr. Linder says. “It has only been done experimentally in a research setting and on a very limited basis,” she says. A study of four obese dogs who underwent an obesity operation lost an average of 75 percent of their excess weight after just three months — a tantalizingly impressive result. And the device used in their gastrointestinal tracts to decrease food intake was removable; it did not have to be implanted forever.

Even so, might a critical mass of owners even want to go this route? Dr. Linder is conducting a study right now to ascertain the answer. She has surveyed more than 500 dog owners, asking about their perceptions of pet obesity and what steps they would be willing to take to slim down an overweight dog, ranging from medication to standard diet and exercise to surgery. “Analysis and research can take some time, so it is probably going to be about a year before the results are published, ” she says. But from anecdotal information, including conversations with veterinary surgeons whose clients have already approached them about obesity surgery for their dogs, it’s probably fair to assume that there is real interest in surgery as an obesity treatment under certain conditions.

What Would Surgery for Obese Dogs Involve?

There are a number of surgical options for morbidly obese people, everything from gastric bypass (stomach stapling) to Lap-Band surgery (making it hard for food to get from the top of the stomach to the bottom) to a sleeve (literally cutting away part of the stomach). Which would be best for a dog?

“We don’t know what might be appropriate for an animal either from an anatomical or medical point of view,” Dr. Linder says. “We also don’t know what would work or be safe. And we need to conduct more studies to know what would make sense from a practical standpoint. When people prepare for obesity surgery, they go through many different steps first. They need to change how they eat up front. And there’s a lot of psychological screening. You have to be approved for surgery” based on a healthcare professional’s view of how well you’re going to handle the aftermath.

How would that work for a dog? And how would you teach a dog to, say, eat more slowly so that eating after surgery doesn’t cause pain in a stomach of reduced size? “There’s a need for more research on how a dog would eat safely after the surgery,” Dr. Linder points out. “You’d need to be very careful afterwards not only about how much the dog should eat but also wet versus dry food, frequency of feeding, and a whole host of questions that we’d really need to do research on first.”

Then, too, she says, you have to think about the pet owner. What type of owner would be able to handle all the new rules for how and how much to feed their dogs? And not just what type of owner but what type of household, since all members of a householdneed to be on board. “That’s a part we need to study more to make sure this would be a safe and effective procedure,” she comments.

Operations for Obesity Are Never A Cure-All

Whatever happens going forward, obesity surgery is “not a silver bullet,” Dr. Linder says. “It’s one tool in the tool box.” People — and dogs — who undergo an obesity operation would still have to eat more healthfully, get used to smaller portions, and incorporate more physical activity into their lives.

The first cases would have to be monitored very carefully and would have to include only a small group of dogs, like the group of four dogs already experimented on, she says. Then, if the results looked good, research could be spread to a larger group to see how they do.

Questions about eligibility would need to be addressed as well, she says. Should obesity surgery only be for dogs who have serious illnesses exacerbated by excess weight, such as severe joint problems that limit mobility or diabetes? Or should it also be to help prevent illness down the line?

Dr. Linder herself believes that eligibility for obesity surgery in dogs would be limited based on very special conditions. For instance, she says, if a dog needed a leg amputated to save his life but was so overweight that his other three legs wouldn’t be able to support him, “perhaps that might be a viable case because it would take too long to get enough weight loss through traditional methods. A surgery could greatly accelerate the weight loss and allow the amputation to extend the dog’s life.”

She says that for most other dogs, in contrast, you’d have to weigh the risks and complications of obesity surgery against, “what if a dog stays overweight his whole life and maybe passes away a year or two earlier because of the excess weight?” That is, what’s the risk/benefit ratio of a serious operation?

Overeating Is Not a Matter of Willpower for Dogs

That obesity surgery is not a magic bullet when it comes to people is something of an understatement. Many people find ways to “eat around” their operations and gain back much, if not all, of the weight they originally lost after their procedures. Indeed, second obesity surgeries to revisit the problem and find a new “solution” have only become more common.

Having the emotional wherewithal to stick to the diet necessary for obesity surgery to work is not an issue for dogs. They don’t need stick-to-it-iveness or willpower because how much food they eat is completely in their owners’ hands.

But their owners would need it. The reason so many dogs are overweight to begin with is that their families overfeed them and under-exercise them. They like to make their dogs happy with more food than is good for them, and many say they don’t have the time to allow their dog to get the level of physical activity he needs.

Obesity surgery would not do away with the necessity for lifestyle changes. Even with an operation, to lose weight consistently and more important, to keep it off, dog owners would still have to engage in feeding and exercise practices that might go against the grain. There’s no getting around that.

Lots to think about. Stay tuned. 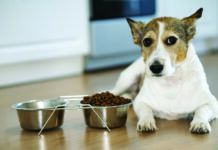