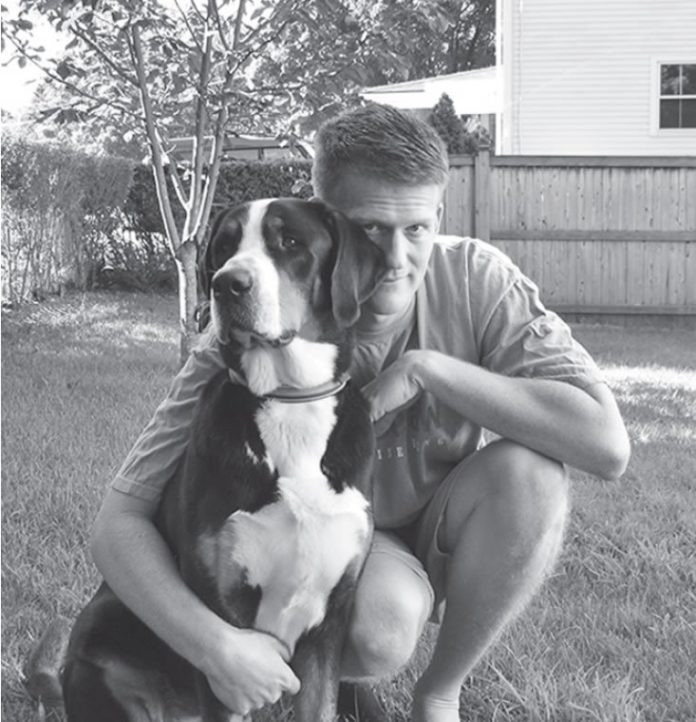 My friend Scott Leaver was 32 when he was diagnosed with a malignant brain tumor the size of an apple. After surgery, the oncologist told him that the cancer had a 75 percent chance of returning within five years — more aggressively the second time around.

A year of debilitating chemotherapy ensued, and Scott, 6 feet 6 inches and always full of power, was pretty much reduced to hanging around the house. Those were hard, lonely days. Scott’s wife, Sharyn, worked full time, leaving Scott a lot of hours to himself to brood.

He found solace in Lucy, the couple’s Greater Swiss mountain dog, saying that “those times when I felt I could at least get out of bed, the only thing that would make me feel better would be to go for a walk with Lulu,” as she was affectionately known by her close human family and friends. “I was miserable. I didn’t even want to talk,” Scott said. But that was okay with Lulu. She just liked being out with him — by the cove at the far end of our neighborhood, in the park close by, always with what Scott called her “gently reassuring, steady-on demeanor.

“During that winter on chemo, even though it was bleak and grey and the water was frozen over,” Scott said, “there was something peaceful about it, just being there with her. We could kind of decompress a little bit, and her good energy kept me going until the next round of treatment.”

Then Lucy died. It was some time after the chemo treatments had ended and Scott was still going for periodic MRIs. He and Sharyn had people over for July 4th, and Lulu came into the house, lay down on her bed, and refused to get up. It had happened before. She’d eat something funny and feel sick for a day, then be back to herself the next, so they didn’t think much of it. But as the day wore on, she seemed worse. She started panting.

By the time they got her to the hospital, she was near death from bloat, even though her abdomen was not distended. Abdominal distention is a common but not guaranteed sign of the illness. With a grim prognosis even if the veterinary surgeon were to perform an operation, the Leavers made the tough decision to put her down.

That was many years ago. Today Scott is 44 and healthy, and he and Sharyn have two children: Maggie Claire, 9, and Harry, 2. And they have Elsa, another Greater Swiss mountain dog, this time from Virginia rather than Massachusetts, where Lucy was born. But it turns out Lucy was Elsa’s great aunt. “We still have a piece of Lulu with us,” Scott says. “Elsa has that same intrepid, steady-on Swissie smile that she did.”

Researchers at Tufts are looking for the root causes of bloat that will keep wonderful dogs like Lulu dying before their time.