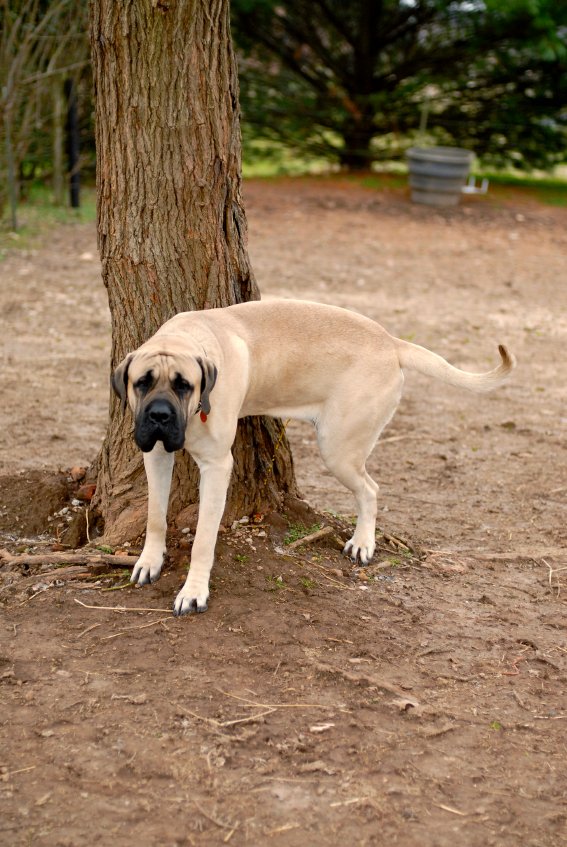 You notice that within the last day or two your dog is unable to urinate, or his urine stream is very weak. Or he makes frequent attempts to urinate and perhaps strains while doing so, or you can see blood in his urine. Get him to the vet’s office — now. If a dog (or person) can’t urinate, toxins normally filtered from the body in the urine build up in the bloodstream, and he will become sick with lethargy and perhaps vomiting, and could eventually die.

Severe straining to urinate or inability to urinate can be caused by illnesses such as an enlarged prostate gland or a tumor in the urethra. But quite often, the cause is a stone lodged in the urethra. Stones, formed when minerals precipitate out of the urine, can end up in the kidneys, where the urine first forms; the ureters, the tubes through which urine flows from the kidneys to the bladder; the bladder itself; or the urethra, through which the urine flows before leaving the body at the tip of the penis or through the vagina.

“The most common place that stones form is in the bladder, and we just remove them and that’s that,” says Tufts veterinary surgeon John Berg, DVM. “We do an operation called a cystotomy, which means we make an incision into the abdomen, and then the bladder. Then we take out the stones, suture up the dog, and he is okay. The operation is no more complicated than a spay. And it’s not urgent. A dog with stones in the bladder may have signs such as straining to urinate or urinating more frequently because of inflammation caused by the stones, but it’s not a severe straining. The cystotomy solves the immediate problem, although all types of stones in the urinary tract do have potential to reform.”

However, in a subset of dogs the stones move from the bladder into the urethra, where obstruction can be complete rather than partial. If the stones are little, the dog can just eliminate them when urinating. But in two places, the urethra narrows, and the stones can get stuck. One is right under the anus — the urethra actually passes around the pelvic bone in back, under the anus. But a much more common spot is inside the penis, which makes urethral stones almost exclusively a male dog problem. They rarely occur in females.

“Unlike humans, a dog has a bone in the penis called the os penis,” Dr. Berg explains. “You can’t see it looking from the outside. But the urethra’s really narrow at that spot, and a stone can get lodged there — just in front of the scrotum. And the dog can’t or can barely urinate.” Fortunately, the diagnosis is simple. A dog’s owner notices within the last day or so that the dog can’t urinate or that his urine stream is very weak. “Urethral obstruction from a stone jumps to the top of our list,” Dr. Berg says. “We diagnose it with an x-ray. Another option is to pass a catheter. If it won’t go past the scrotum, it’s likely a urethral obstruction by a stone that’s causing the problem.”

Once the diagnosis is made, the dog is anesthetized and a catheter is passed to try to flush the stone back up into the bladder by injecting saline. If the veterinarian can dislodge the stone and get it to move to the bladder, a simple cystotomy is all that’s required.

If the stone is too stuck to dislodge upon flushing, a more involved operation called a scrotal urethrostomy is often called for. What that means is that the surgeon makes a new opening right where the stone is. “We actually remove the scrotum,” Dr. Berg says (most dogs have already been neutered so the scrotum is no longer holding the testicles) and make an opening at the spot to the urethra. “It’s a new permanent opening,” he points out. “Thus, from then on the dog urinates through a different spot. His urine, instead of coming out the tip of his penis, comes through between his hind legs. Some dogs might still lift their legs to urinate, but others squat, more consistent with how a female dog would position herself to urinate. “A lot of owners think their dog could be incontinent after the surgery,” Dr. Berg says. “He won’t be. He can hold his urine. It’s just that when he relieves himself the urine exits the body through a different opening.” The only complication tends to be some oozing of blood afterwards, sometimes even for a few days, because you’re making a cut in the penis. “The penis is very vascular,” Dr. Berg notes, “so the likelihood for blood to ooze is relatively high. It’s not life-threatening,” he is quick to point out. “It’s nuisance bleeding. You wouldn’t want the dog in the house with white carpets. So we keep a dog who has undergone a urethrostomy in the hospital a few days until the bleeding stops.”

Owners should note that after a scrotal urethrostomy, the dog has to wear an e-collar — one of those cone-shaped collars — for two to three weeks to prevent him from licking at the site. A dog could literally lick out his stitches.

A newer treatment option involves lasering the stone. Specifically, if the stone can’t be flushed backward into the bladder so that a simple cystostomy can be performed, rather than perform a scrotal urethrostomy, the surgeon may pass a small endoscope with a laser device that “breaks up the stone while it’s in its stuck position,” Dr. Berg says. “The small pieces can be flushed up into the bladder and removed via cystostomy.

“It’s a nice option if your veterinary facility has the laser equipment,” comments Dr. Berg. “We always prefer a cystotomy at Tufts over a scrotal urethrostomy because it’s less complication-prone. There’s less bleeding. And many owners want to preserve the normal way a dog urinates. We probably do two to three cystotomies a week,” he adds. “Stones in the urinary tract are relatively prevalent. But scrotal urethrostomies, we probably do around six to eight a year. That operation is not super-common.”

Still, owners shouldn’t despair if their veterinarian recommends scrotal urethrostomy. “With a urethrostomy,” Dr. Berg says, “you can feel pretty confident that the dog is never going to obstruct again if he forms new urinary tract stones, because the urethrostomy provides an opening through which even large stones can pass. But with a cystostomy, he could re-obstruct.”

Indeed, if your dog has ever been diagnosed with stones anywhere in his urinary tract, you need to be able to pay attention to him pretty much all the time to watch for urethral obstructions. “Such a dog definitely shouldn’t be left alone for the weekend,” Dr. Berg says. Unless a urethrostomy has been performed, the risk for recurrence is lifelong (although certain types of stones are less likely to recur with specific changes in diet, which must be coordinated with a veterinarian to insure that the dog’s nutrient needs continue to be met while his stone formation risk is diminished).