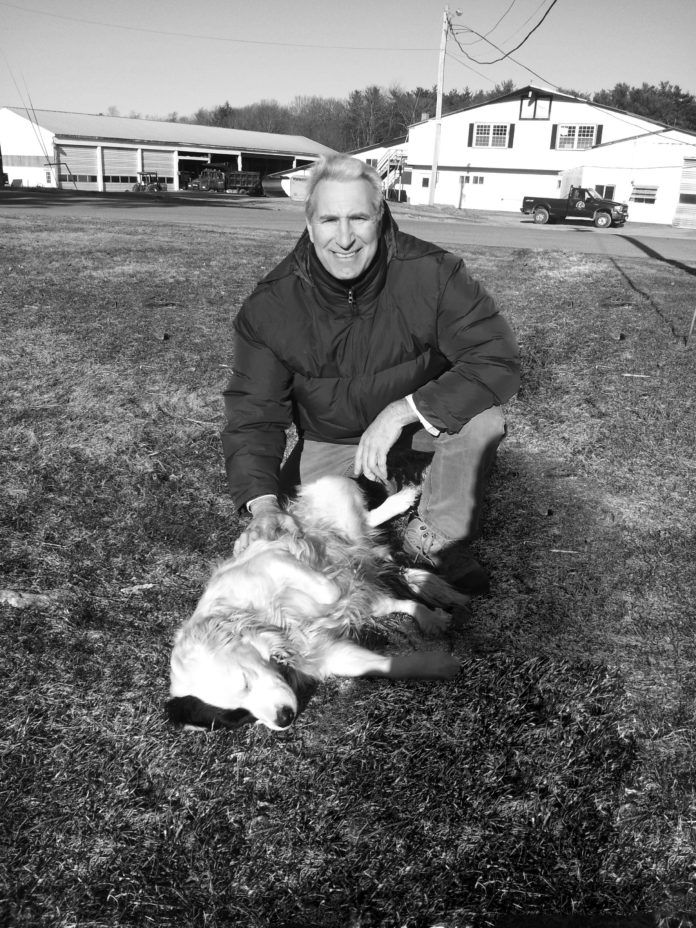 Just as stem cell research is ushering in a new wave of scientific exploration to heal sick people, studies examining the workings of stem cells are underway for treating sick dogs. To find out just where things are at with stem cell research on dogs’ behalf, we talked with the Director of the Regenerative Medicine Laboratory at Tufts Cummings School of Veterinary Medicine, Andrew Hoffman, DVM, DVSc, DACVIM.

Your Dog: Is stem cell research for dogs subject to the same ethical considerations as for people? For instance, are dog embryos being created just for their stem cells?

Dr. Hoffman: Actually, very little in the field of stem cell research, either for dogs or for people, has anything to do with growing embryos that are then destroyed.

Your Dog: But isn’t that how stem cells are grown?

Dr. Hoffman: For all intents and purposes, no. It’s true that a developing embryo, no matter what the species, contains stem cells — cells that are undifferentiated and therefore aren’t yet slated to become specific tissue in the body. But it’s not true that stem cells can be harvested only from developing embryos and nowhere else.

Your Dog: Where, then, can stem cells be obtained for research, or, when their uses are understood and confirmed, for curing or treating dire diseases?

Dr. Hoffman: Yes. A developing embryo has three different types of cells, that is, three major embryonic layers of cells that lodge in different tissue once the animal (or person) is developed. The outer layer of cells is the ectoderm, which later forms skin, nerves, and parts of the eye. In the middle come the mesenchymal cells — that layer is called the mesoderm — and innermost, the endodermal cells.

The most commonly used stem cells in both animal and human research are those which are believed to arise from the middle mesoderm layer, which in mature animals and people can be found in bone marrow, fat stores, and connective tissues of all organs. They’re the ones that are easiest to grow and harvest in large numbers and then package and prepare for therapeutic application. The cells of the other two layers are more difficult to grow to sufficient numbers, and they also cause a greater immune response in the recipient; there’s a greater chance of rejection. So in part, the field as a whole has gone down the easiest path, and in part has selected a cell type that is better tolerated by recipients.

Fortunately, the cells of this middle layer — the mesenchymal stem cells, or MSCs, as we call them — have demonstrated that they have really broad repair potential. They release a lot of chemicals that stimulate the growth of healthy cells in the body. They stimulate wound repair. MSCs are the golden boys of stem cell therapy right now. There are very few stem cells trials right now that aren’t using them.

Your Dog: Are you saying that stem cells from fat tissue can be taken from a dog and then injected into a sick part of her body, where they grow into healthy cells to help specific body tissue or a diseased organ repair itself?

Dr. Hoffman: Many people have a notion that stem cells have the capacity to convert themselves into a variety of cell types after transplantation and thus resupply cells in damaged tissues such as kidney cells or heart cells or bone. However, only a very small amount of stem cell research right now is directed at what we call engraftment — stem cells attaching to particular tissue or organs and then maturing into cells of those organs. That’s not to say that engraftment isn’t of great interest. Even here at the veterinary school at Tufts, we have research in place to regrow a lung, a situation that requires engraftment, cell conversion (‘differentiation’), and cell division (‘proliferation’). Scientists at other research institutions are looking at regenerating heart muscle cells or producing retinal cells that engraft and live on in the eye.

This type of research on stem cells as replacement cells is, however, a small fraction of the research that goes into therapies. Certainly, clinical trials are not focused on using stem cells to replace damaged cells, for example, to get a paralyzed animal [or person] to walk again by injecting stem cells into the spinal cord that turn into nerve cells. This is coming; it’s only a matter of time before scientists perfect growing up a patient’s own cells to rejuvenate a part of the body that no longer works, or no longer works properly. Currently, though, the majority of stem cell clinical trials are just about getting stem cells to influence damaged or reserve (healthy) cells in a particular part of the body by releasing ‘signals’ in the form of chemicals. That’s where the momentum is for the foreseeable future. Stem cells in mature fat tissue or bone marrow couldn’t even change into other types of cells; that’s where you’d need more primitive cells such as embryonic or now, reprogrammed embryonic-like cells.

Your Dog: But why would you want stem cells to just release chemicals? What good would that do?

Dr. Hoffman: Chemicals sent forth from MSCs — that ‘middle layer’ of stem cells lodged in fat tissue and bone marrow — have the ability to stimulate repair and regeneration of cells already in place. For example, they stimulate new blood vessel formation, or better closure of wounds. That’s currently where their value lies.

Your Dog: Can you give an example of the specific research taking place?

Dr. Hoffman: We have a faculty member at the Cummings School who has just started a clinical trial in which she’s looking at the impact of stem cells on the survival of dogs that have life-threatening kidney disease. Again, she’s not injecting dogs with stem cells that she hopes will engraft onto sick kidneys and take over for the sick cells, proliferating to the point of growing whole new kidney tissue. It’s about getting the stem cells in there to exert a positive effect on the compromised cells that need help, or coax healthy cells that remain to replace damaged cells. In this particular case, we hope that the MSCs reduce an over-active immune system that is attacking the kidneys.

We have another faculty member who is starting a clinical trial to treat an autoimmune liver disease that afflicts Labrador retrievers and is generally fatal. She hopes to arrest liver inflammation and cirrhosis, or scarring — also by reducing the immune response.

Your Dog: How is the research done?

Dr. Hoffman: The stem cells either get injected intravenously (as is the case in the examples of clinical trials at Tufts), or at the site of the problem. When injected intravenously, cells ‘home’ to different parts of the body (e..g., lung, liver, kidney) and release chemicals locally to those tissues. In the scenario when cells are injected directly into tissues, the cells remain in a holding pattern in that region and release their beneficial chemicals there.

Your Dog: What happens to the stem cells after that?

Dr. Hoffman: They die, mostly. Within about 72 hours, most MSCs are gone. That’s why they’re not being looked at for engraftment and cell proliferation. They simply don’t last long enough. That would take the other kinds of stem cells, the ones that come from embryonic tissue or newly discovered reprogrammed cells. But they’re much harder to harvest and grow. And unless the cells are harvested ahead of time from the recipient patient, they’re much more prone to rejection by the body into which they’re injected. MSCs, on the other hand, are popular in research because they’re almost devoid of the main trigger for starting an immune response. The immune system of the tissue into which they are injected doesn’t recognize them as ‘foreign’ — to the point that they can be used almost interchangeably between patients without worry that a big immune response will make an unhealthy dog even sicker than she already is. There are some minor reactions, but they’re so minor that even multiple injections of the cells generally do not incite a negative reaction.

Your Dog: Why would you inject stem cells multiple times?

Dr. Hoffman: Because they don’t last long. If you want a long-term beneficial effect, several, sometimes many, ‘doses’ of stem cells are needed. It might be 10 to 20 million cells per injection, which isn’t a lot.

Your Dog: How have results been so far?

Dr. Hoffman: Results in clinical trials to date have been promising —but not conclusive. There are a lot more veterinarians using stems cells in their practices than there are study results to support their use. No clinical trial has as yet proven, without a shadow of doubt, a clear benefit. This is largely due to the limited size of studies, and the fact that important controls were left out. These studies are very difficult to do for the simple reason that these are our companion animals, and no one wants to be included in a clinical trial and receive either unproven or ineffective treatments or placebos (which have no effects), and no one wants their pet to experience adverse side effects.

With that in mind, one of my pet peeves is the current high expense for stem cells where they have not yet been shown to be valuable. Many people fork over $1,500 to $2,500 to treat their dog or their horse with stem cells, and we don’t have the clinical trial data to support recommending those therapies. This seems to be mostly the case for musculoskeletal treatments to ameliorate, say, the symptoms of arthritis or tendon injuries. Companies claim they are seeing benefits in patients that are treated with their MSCs, but the publications are not there for dogs (or humans, for that matter) to support this claim. There’s some research out there, and it’s provocative, but there is always a question about how much money is worth spending on an unproven therapy, which is often the case with new therapies in veterinary medicine. At this point the medical community, both veterinary and otherwise, is simply trying to understand the merits of stem cell treatments. We’re trying to design trials that are objective and ethical and won’t hurt the patient while allowing us to garner the information we need. At this point, we have a lot of grade C and D evidence out there, not a lot of As and Bs.

It is also important to note that, unlike the situation in human medicine, stem cells are unregulated thus far in veterinary medicine, so the safety and efficacy and protocols used to generate cells by companies is not under intense scrutiny yet. But this will also come. Tufts is preparing for this inevitability by producing cells in-house, and working on new methods to improve quality and potency of the cells.

Your Dog: Where do you see the field of stem cell research headed in, say, five or 10 years?

Dr. Hoffman: It’s headed toward reprogramming or activating stem cells to ‘think.’ This is a very new area. The process of reprogramming stem cells so that they become particular types of cells (heart cells, nerves, etc.) was only first written up in 2006. And here we are now, talking about it, not only within the scientific community but in the lay community, too. I suspect that within the next five to 10 years for MSCs and the next 10 to 20 years for reprogrammed cells, application of stem cells to treat or even cure disease will have been proven and documented and used as a conventional part of veterinary practice.