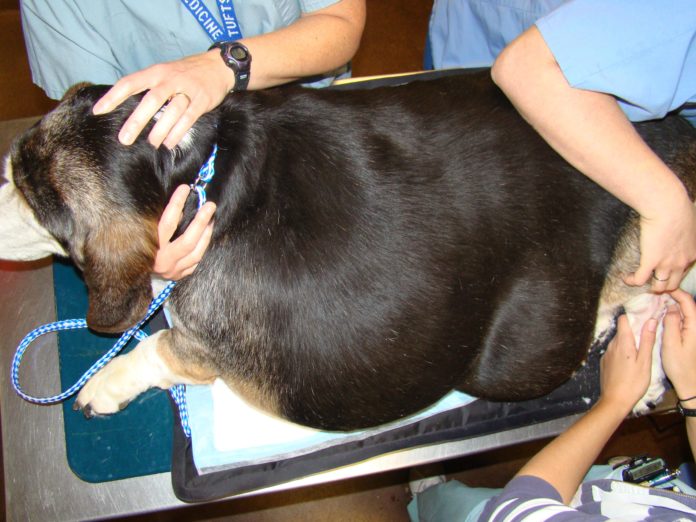 “I have had many dogs in my life,” relates Nadine Johnson of Miami, Florida. “But this one,” she says of her nine-year-old golden retriever, Maise, “holds my heart like no other.

“I once rescued a puppy who had been kept in a crate all the time. When I brought the dog home I saw that she did not know how to walk up and down stairs. Maise stepped in and taught her how to do it in such a kind and gentle way. She is such a sweet soul.”

No wonder Ms. Johnson is concerned that Maise has developed fatty tumors “all over her body,” as she told us. “Some are under her legs, some are on her back, one is on her neck, and there is a big one above one of her hips. The one above her hip is almost as big as my palm.

“The ones on her back are round and hard,” Ms. Johnson goes on to say, “but others feel like there is a liquid ball inside. I have taken her to the vet and was told not to worry if they are on the skin and you can put your fingers underneath and they are not connected to her body. He added that it would be a mistake to remove them — expensive and involving unnecessary anesthesia.

“I should add that they are not painful and do not bother her. But what causes these fatty tumors? Is there anything I can do to stop them from occurring? I filter her drinking water, and I feed her the best food that was recommended by her doctor.”

Ms. Johnson, first, do not worry that something you’ve been feeding your dog or the water she has been drinking in any way contributed to her tumors. Fatty tumors, known as lipomas, have not been shown to be attributable to any environmental or lifestyle cause. That is, there is nothing you as her loving owner can do to prevent them. Even a dog with an ideal body condition can develop them. And many do.

“They are among the most common tumors we see in dogs,” says John Berg, DVM, a soft tissue veterinary surgeon at Tufts whose stock in trade is examining and sometimes removing unwanted growths on dogs and other pets.

Second, do not be concerned that some of the tumors are round and hard and others feel like a ball of liquid. They can feel different to the touch yet still all be harmless lipomas. Dogs die with them, not of them.

But what you don’t know yet is whether all the masses on Maise are in fact benign lipomas, and feeling them is not a way to gauge. Benign tumors and cancerous ones can feel the same to the touch, in fact. Don’t panic. Chances are they are nothing to worry about. “There are many dogs like Maise that form a lot of lipomas,” Dr. Berg says. “We’ll see dogs that have 10 or 11.” Indeed, once a dog has developed a lipoma, she is prone to developing additional ones.

But you should never self-diagnose. Each lump “should be aspirated by a veterinarian to make sure it is a harmless lipoma.” Aspiration involves simply passing a needle into the lump and then aspirating some of the cells with a syringe. “Some of the material that comes back is then squirted onto a microscope slide,” Dr. Berg says, “but it doesn’t even need to be looked at under a microscope. If you can just see on the slide that it’s very clear, greasy material, that’s a lipoma.”

Even if it’s not a lipoma but, rather, a cancerous mass, that’s no reason to panic. Many cancerous tumors can be safely removed without ever invading healthy tissue or spreading to vital organs in other parts of the body.

When Dogs Get Tumors: Fear of Cancer Stops People from Seeking Veterinary Treatment

There’s every reason to have a lump or bump aspirated if it gets as big in diameter as, say a quarter. In those instances that it does turn out to be cancer (often a mast cell tumor), early treatment allows for the least invasive (and least expensive) treatment and the best chance for recovery and a long, healthy lifespan.

But even benign lipomas should be diagnosed early — and watched for further growth. “I’ve seen owners who were worried that a lump on their dog was cancer,” Dr. Berg says, “and they didn’t want to find that out, so they let the lump get bigger and bigger until the dog finally couldn’t walk, and they had to take it to the vet. One place on a dog that’s fairly common is the axilla — the armpit of the front leg. I’ve seen people bring in their dogs with lipomas there as big as a cantaloupe. At that point the surgery to remove it becomes more difficult, with a higher risk of healing complications. So fear of cancer kept the owner away, but now they have a risk to deal with that could have been avoided if tended to sooner.”

Dr. Berg notes that aspiration is a very simple procedure performed right in the exam room, with no anesthesia necessary, so “there’s no excuse for not having it done. You don’t have to prep or clip the area in any way,” he says. “You just insert the needle, squirt what’s collected onto a slide, and look at it. If there are 11 lumps, for instance, we lay out 11 glass slides and do 11 aspirations. It all goes quickly.” If the aspirate indicates something other than a lipoma, further testing, including perhaps a biopsy of tissue that will require anesthesia, will be recommended.

Treatment Decisions for Lipomas on Dogs

Nadine Johnson’s veterinarian is right that lipomas that are not interfering with a dog’s mobility do not need to be treated, even if they are not fun to look at. They simply should be monitored to make sure they’re not growing quickly enough to cause a problem. “You want to remove them before they actually reach the point of impeding mobility in order to keep the procedure uncomplicated,” Dr. Berg says. The doctor should be paying attention to the rate of growth, which will provide a good indication of whether a benign lump is going to get out of hand.

That said, there are some owners who are uncomfortable with leaving lipomas alone. Most owners in this category do not want to worry about assessing whether the mass has become large enough to consider surgery and prefer the peace of mind that comes with knowing it is gone — and there is nothing wrong with this approach.

It should also be noted that while lipomas don’t need to be removed unless they are quite large or are interfering with mobility, and while all cancerous tumors do need to be removed, there are rare cases in which it’s not clear whether the bump is malignant or not; medical screenings are not 100 percent foolproof. In those instances, the veterinarian will explain the options and the risks of waiting and watching. Sometimes, all things considered, the wait-and-see approach proves to be the right one.

Keeping Your Dog Safe and Healthy

You shouldn’t just wait until you happen to notice a lump somewhere on your dog’s body. From the time a dog is middle-aged, it’s a good idea to check for masses every three to four months. Just feel all over the dog — along her back, in the “arm pits,” down the legs, and so on. It’ll take only a minute.

Don’t worry about things the size of a grain of sand. But if you feel a bump that’s pea-sized that you haven’t felt before, it’s large enough to have your dog’s vet look at it. It’s probably nothing. But if it’s something, you will have caught it early for the easiest treatment and the best possible outcome. Not dealing with something significant doesn’t make it go away.

The vet will take a bit of a history by asking whether the bump has stayed the same size since you found it, or whether you feel it has been growing slowly, rapidly, or somewhere in between. If a bump doesn’t increase in size over a period of several months to a year or two, chances are it’s nothing to worry about. Benign lipomas tend to grow very slowly or not at all.

Cancers, on the other hand, can increase in size rather rapidly. If that’s the case, or you don’t know whether it’s the case because you just discovered the lump yesterday and you don’t know how long it has been there, the vet will be on more heightened alert to screen for cancer. It doesn’t mean it is cancer; it means it’s a possibility to explore.