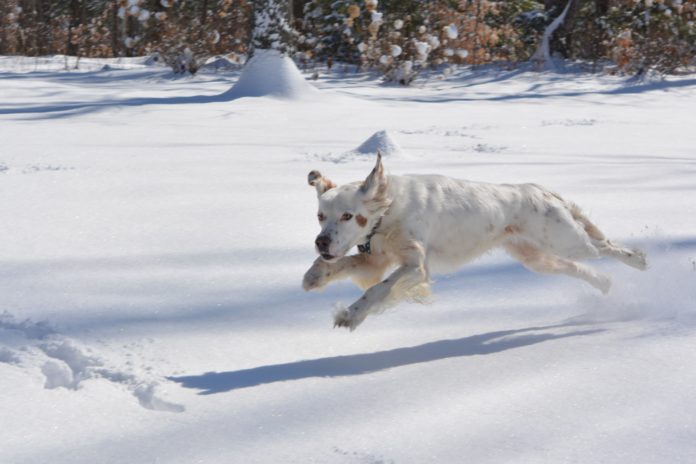 Eight-year-old English setter Buxley “was staying at my mom’s house,” says Neil Whitmore of Fairfield, Virginia. “He had been out with her in the morning, and then she left him in the fenced yard. In the early afternoon he lay down with her, like he always does, but then he couldn’t get up.

“It got progressively worse very quickly. He had no muscle control, and then he was paralyzed in both his front and rear legs. He could move his head,” but that was it. “I had to pick him up to bring him to the car.

“My wife and I thought that maybe it was a toxin, or Lyme disease. We took him to the vet’s office, where they did an assessment and took a blood test. ‘It’s not Lyme disease,’ they said. ‘We can’t figure out what it is.’ At that point my mom was going through her yard and looking for anything Buxley might have gotten into. She couldn’t find anything.

“From the first vet, my wife, Gwen, and I took him to an emergency veterinary clinic. They put him on an IV, and he stayed overnight. We called during the night — around 2 or 3 in the morning — and they said he wasn’t getting any better. They ran blood tests, too, but also said, ‘We can’t figure out what it is.’

“Early the next morning, around 5 or 6, they said that maybe he had a brain tumor, or a stroke. We were worried that it was not going to be a good outcome.

“The vet kept him on supportive care for 24 hours more,” but there was no change. The doctor then said that we could also try sending Buxley to a neurologist.” The closest one available was three hours away, in Rockville, Maryland. (The Whitmores live in Virginia’s Shenandoah Valley.) It turned out to be one of the offices of Bush Veterinary Neurology Services, where Buxley was seen by Jessica Barker, DVM, MS, DACVIM.

Dr. Barker conducted MRI and learned that Buxley had Type I intervertebral disk disease. A bulging disk was putting enormous pressure on his spinal cord. She performed decompressive surgery right then and there.

The crisis was back in December, and afterward Buxley was confined to his cage for a good month except for being walked outside to relieve himself.

But “if most people saw him now,” Mr. Whitmore says, “they would not realize he had had an injury. We can tell because his back end is still a little unstable. But he took off the other day at full speed, and we had to go get him. He’s pretty much back to normal. The way it looks, he’s headed for a full recovery.” Dr. Barker agrees.