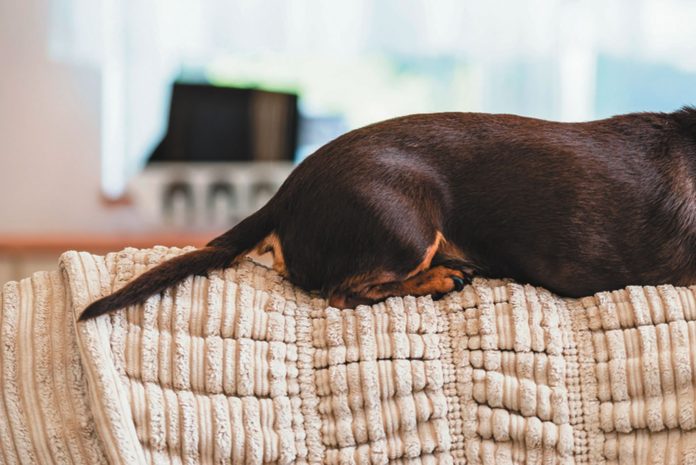 Injured tails on household pets are not just reserved for cats relaxing too close to rocking chairs. “We definitely see tail accidents in dogs, too,” says John Berg, DVM, the editor-in-chief of Your Dog and a veterinary surgeon at Tufts. Dr. Berg has sewn up his share of dog tails that have been through the proverbial ringer.

There are all kinds of causes of tail damage. An excited dog may try to run even though her tail can get caught on something, for instance. Or her tail gets stepped on by accident. Or she’s hit by a car. Or she avoids getting hit by a car with the exception of her tail.

In some cases, a dog may injure her tail over time from, say, wagging it against chicken wire fencing surrounding her outdoor run. “If she’s constantly whacking it on the wire, she can end up abrading the tail tip and causing chronic lacerations, or cuts, that bleed,” Dr. Berg says.

Some tail injuries can be dealt with pretty easily and don’t cause dogs much of a problem. Even gory accidents frequently have simple solutions. But the tail is actually a continuation of the spine, and damage can come with serious neurological consequences. Here’s a rundown.

Problem: De-gloving. This is a situation where the skin is stripped away and you can literally see bone and muscle. It isn’t pretty.

Solution: Amputation. Often, amputation is a good solution for a tail that has been de-gloved — and perhaps mangled in the process, with the nerve supply disrupted or multiple bone-crushing injuries. Amputation may seem like a harsh route, Dr. Berg says, but it traumatizes only the owner. The tail is not an anatomical necessity, so it’s not something a dog requires in order to live a full life. Moreover, dogs are not psychologically affected by their appearance, nor are they judged on their looks by other dogs.

Solution: Time. You can’t put a cast on a fractured bone in a dog’s tail or reset it, but it will usually heal on its own. The tail may end up with a curve or kink in it, but it won’t cause a dog any discomfort or get in her way.

Solution: Wait and see. If a dog’s tail gets yanked hard enough, not only nerves in the tail itself but also nerves leading to the bladder and anus could suffer damage. And that could mean the dog loses some or all control over urinating and defecating. “It doesn’t happen often,” says Dr. Berg. “But it does happen.”

If skin sensation is unaffected around the anus — the dog reacts when the veterinarian stimulates the area — there’s a very good chance that control over urination and bowel movements will return, usually within a couple of months. The nerves may just be stretched and need time to recover. But if the nerves are torn and the dog does not feel sensation on the skin around her bum, chances are she’ll remain incontinent for life. In such cases, euthanasia becomes an option, but fortunately, “it rarely comes to that,” the doctor says.

Solution: Often, amputation, even if the tumor is benign rather than cancerous. “The skin around the tail is very tight, which means that after the tumor is removed, it may be hard to close up the incision,” Dr. Berg says. That’swhy, he notes, very often with skin tumors on the tail, instead of trying to excise the lump, the doctor will amputate the tail. Problem solved.

When the Tail Goes Cold

Whether it’s called cold tail, dead tail, or limber tail, it all means the same thing — the dog’s tail is hanging limp from its base. It happens suddenly rather than gradually and is thought by many to be the result of muscle injury brought on by overexertion. Specifically, the coccygeal muscles near the tail’s base are believed to have sustained damage that leads to drooping, which can range from mild (the tail stays up but can’t make it to the horizontal position) to severe (it hangs straight down like a long lock of limp hair).

Sometimes, a dog will clearly be in discomfort or outright pain as she goes to lie down. Many dogs stop wagging their tails because the condition causes soreness.

Susceptible breeds include Labrador and golden retrievers, English pointers, setters, beagles, and foxhounds. But any breed can fall prey.

Luckily, the condition is not permanent and usually resolves on its own within a week. Just go easy with the exercise because extra activity might mean extra tail pain.