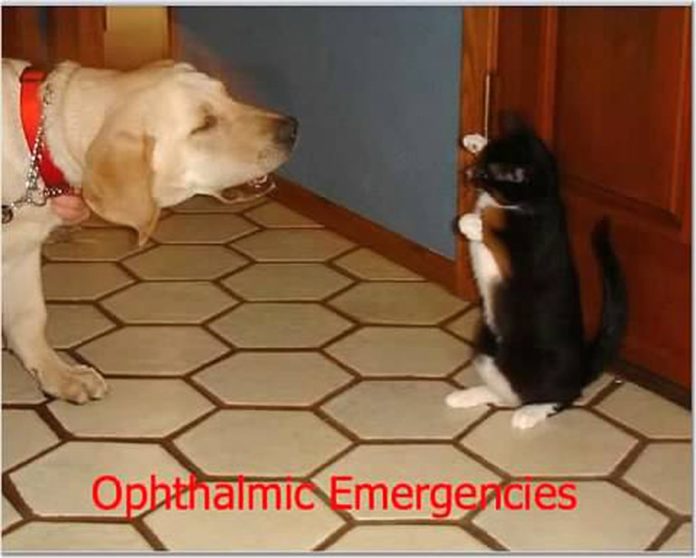 “The worst thing I’ve ever had to deal with is a dog getting shot in the eye,” says Fairfax, Virginia-based veterinary ophthalmologist Nancy Bromberg, VMD, MS, DACVO. “Usually trauma takes the form of foreign bodies — splinters in the conjunctiva [which lines the inside of the eyelids and also covers the white of the eye] or under the dog’s third eyelid or stuck right into the cornea. I’ve seen that a fair amount in hunting dogs running through brush,” Dr. Bromberg notes. “But it can also happen when a dog simply sniffs around. Sometimes a seed from a tree can get caught in a dog’s eye, too.”

For instance, dogs like to hang around children. But if children are playing with a baseball bat and the dog is right there behind home plate because she wants to be near her buddy, she can inadvertently get hit in the eye with either the bat or the ball. It happens.

An eye can also be traumatized in a big dog-little dog fight, Dr. Bromberg says, with the little dog often bearing the brunt of the aggression. But there are also “little cat-big dog fights,” she comments. “A lot of times around the holiday season,” she notes, “people bring home a puppy and decide to introduce it to the house cat, who doesn’t like the new animal and reacts by sticking her claw into the dog’s eye. That can cause major trauma.”

Of course, getting hit by a car is another all-too-common cause of eye trauma.

In the case of a car accident, you’re probably going to get your dog straight to your primary care vet’s office, which is the right call to make. But outside of a situation like that, “if the way your dog’s eye looks makes you suspect a deep ulcer [break in the smoothness of the transparent cornea that covers the eye] or glaucoma, you should probably seek the advice of a veterinary ophthalmologist,” Dr. Bromberg says.

“These days,” she adds, “so many general veterinarians take a look and immediately refer pet owners to a veterinary ophthalmologist. But people can also find one on the website of the American College of Veterinary Ophthalmology (acvo.org). Click on “Veterinarians & Public,” which will take you right to “Locate a specialist.”