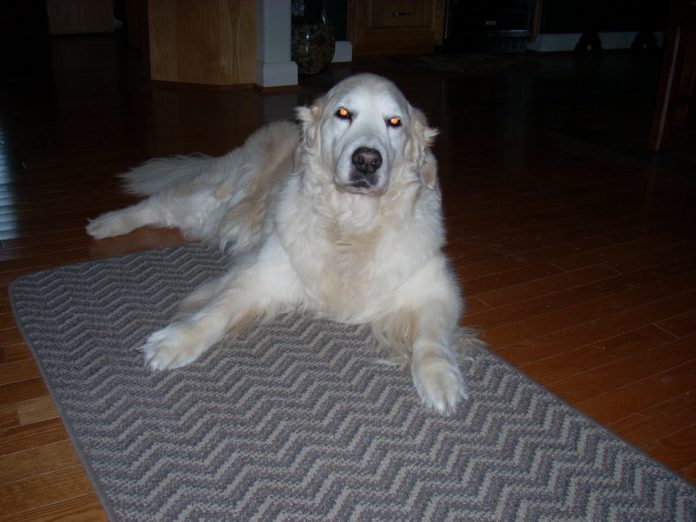 “It was so out of the blue,” recalls Mary Bridwell of Morro Bay, California, while describing her 13-year-old golden retriever Inga’s sudden and frightening loss of balance last March. A repetitive thumping sound startled Mrs. Bridwell from sleep at 2 a.m. When she left her bedroom to investigate, she found Inga “trying to stand up but slamming into the wall and obviously distressed.” Mrs. Bridwell was further alarmed by a new tilt to Inga’s head and rapid movements of her eyes, darting to and fro.

Despairing that her pet, who had just successfully undergone cancer treatment, was now facing a stroke, it was difficult for Mrs. Bridwell to maintain her own emotional equilibrium as she brought her to the nearest 24-hour veterinary clinic.

Luckily, the veterinarian working the night shift was able to allay Mrs. Bridwell’s fears of a stroke, explaining to her that he knew right away by looking at Inga that her rapid eye movements and head tilt presented a textbook case of a condition known as geriatric vestibular disease. It’s a syndrome affecting older dogs. Something goes amiss in the vestibular system, which provides a sense of balance and coordination in connection with the limbs, head, neck, and eyes.

The vet making the diagnosis in the pre-dawn hours was Robert Schechter, DVM, PhD, owner of Atascadero Pet Hospital Emergency Center in Atascadero, California. He had seen the disease many times before and knew the telltale constellation of symptoms, which can include circling movements. He also knew that scary as they look, they are followed by a significant and even full dissipation within the first several days and a full recovery within one to two weeks, though some dogs, like Inga, never lose the characteristic change in head position. Inga’s “parents,” Mrs. Bridwell and her husband, Tim, don’t mind. Nor, apparently, does Inga. They say her now slight tilt of the head does not seem to cause her discomfort and only makes her look more adorable.

That Inga’s veterinarian was able to quickly add up the head tilt and other hallmark manifestations of the disease does not surprise veterinary neurologist Karen Kline, DVM, MS, DACVIM, who serves as the Medical Director of the VCA Veterinary Medical Center in Seattle. “We look for a profound head tilt, which indicates an abnormality of the vestibular system,” she says. Another classic sign is continued and consistent circular or horizontal rapid eye movements, or nystagmus, with the fastest motion occurring opposite the direction of the head tilt, Dr. Kline explains. The dog does not show signs of pain and is generally alert, although the condition can be quite nauseating and in that way cause the patient to feel unwell, she says.

Vexingly, there is no known cause for it, it is not known what can bring it on, and there isn’t an actual cure. But as alarming as the symptoms are to both pet and owner, the end result after two days to two weeks is reassuringly anti-climactic with, at most, only a head tilt like Inga’s to show for the disease’s dramatic appearance.

Risk of misdiagnosis
Veterinarians don’t just look for the tilting head, the lack of balance, circling movements, and the darting or rolling eyeballs to diagnose geriatric vestibular disease. They also check to see that the symptoms, occurring in a cluster, appear out of nowhere.

Dr. Kline explains, too, that the doctor should check to see that on physical examination, the patient is able to move all of her limbs, able to feel in all limbs, blinks in response to stimuli, and does not have a change in alertness or consciousness, blindness, or lessening of facial sensation. If any of these signs are not as they should be, a referral to a neurologist will likely be made. The “extra” symptoms can be indicative of problems ranging from tumors to inflammatory diseases and infection.

Certain testing can also help veterinarians rule out other causes of the peripheral vestibular signs, such as a thyroid check for hypothyroid and a blood pressure check to rule out hypertension, which can result in a stroke and whose symptoms can mimic those of vestibular disease. The vet may also examine the ear canals, as ear canal infections can occasionally spread to the inner ear and cause balance problems.

Even with all that, however, sometimes a dog is sent home with a solid hunch that she is suffering from geriatric vestibular disease but the symptoms extend beyond the expected time frame, or worsen, or other changes in behavior are noted. In such cases, a stroke is more likely to have been missed. In that scenario, MRI might be advised to provide a clear diagnosis and, from there, a direction from which to plan appropriate treatment, says Dr. Kline.

At the same time that something significant can be missed, it’s crucial not to panic when the frightening symptoms appear. Focus instead on getting your dog to the veterinarian who can do a physical exam and decide if a follow-up by a neurologist is warranted or if it appears likely that the problem is just geriatric vestibular disease. Dogs with geriatric vestibular disease may be euthanized unnecessarily if an owner is overly convinced that her pet is suffering from a severe condition requiring expensive medical attention that may not bring relief.

Wait and see
Because Inga so clearly appeared to be suffering from a textbook case of vestibular disease, Dr. Schecter at the Atascadero Pet Hospital Emergency Center suggested to Mrs. Bridwell that she take a wait-and-see approach. There was a brief discussion about MRI, but a decision was reached not to put Inga through that testing after she had just endured cancer treatment.

That’s the typical tack a vet will take upon seeing symptoms like Inga’s, sending the dog home with the recommendation to provide care for her, protect her from injury, and assist with daily habits, as needed. For instance, Mrs. Bridwell had to use a sling under Inga’s belly for a couple of days to keep her lifted while she was relieving herself.

She also had to remain vigilant and be on call as a first-pass diagnostician as time passed. That is key. “If your dog is not doing well or she is regressing, if her gums are pale, seek attention immediately — go to the veterinarian to have this checked out,” says Dr. Kline, because these symptoms are not part of geriatric vestibular disease. The dog will need a proper diagnosis and treatment with the help of X-rays, MRIs, CT scans, and perhaps other tests to further investigate the cause of her symptoms.

Inga today
Though it is not common, dogs can have a recurrence of geriatric vestibular disease, and most owners are better able to cope the second time around, recognizing the symptoms as something that will not be pleasant for their dog but from which she will recover. Inga had a second bout a month or so after the first, which brought her back to the clinic, from where she was sent home with an over-the-counter motion sickness medication. The second episode was shorter than the two-day duration of Inga’s first experience with the disease, and the condition has not returned since.

Mary Bridwell and her husband, Tim, have taken it in stride with an acceptance of life’s cycles. “We’ve had so many dogs before and so we’re familiar with the phases of life and how that affects them, such as how Inga can’t go on long walks with her brother and us anymore. She is a cancer survivor, so we’re not surprised by symptomatic changes and when she developed this, we just said, “Oh, an inner ear condition. She feels drunk, wobbly, and has vertigo,” says Mr. Bridwell.

That attitude, and the Bridwells’ own watchful eyes, helped keep Inga from being over- or underdiagnosed.