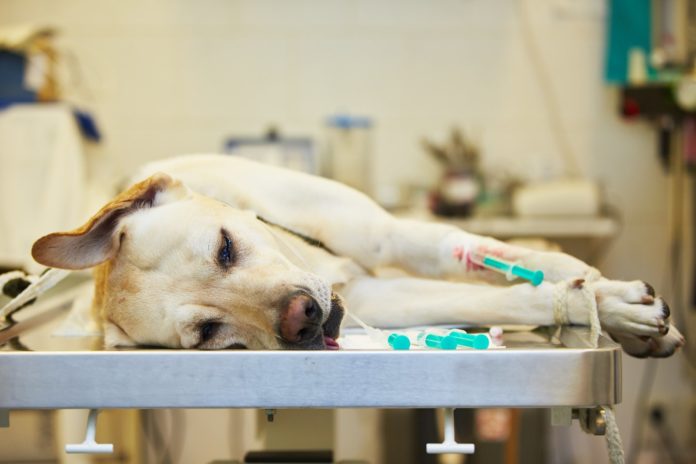 Say “cancer,” and what comes to mind is not a mad rush to the emergency room to avoid imminent death but, rather, a slow-growing problem with gradual deterioration. However, some dogs (and people) with cancer often feel perfectly fine and exhibit no symptoms and therefore go undiagnosed — until a catastrophic emergency occurs.

Consider that sometimes the very first sign that a dog has cancer is difficulty breathing. Lymphoma and other cancers in the chest can cause fluid to build up around the lungs, making it hard for them to expand and contract as they should. The end result: the excess fluid causes the dog’s breathing to become labored.

Truth be told, a cancer anywhere in the body can potentially metastasize to the lungs, eventually making it hard to breathe. Fortunately, animals and humans have plenty of excess lung capacity, and cancer in the lungs generally doesn’t affect breathing until it is very advanced. Unfortunately, such a complication usually means a dog is reaching the end of his time. A veterinarian may be able to make him a little more comfortable for a short while but not do much beyond that.

Another way cancer can become an immediate life-and-death situation is the case of a malignant tumor growing larger over a long period of time but silently, in a noncritical spot. Then one day, it finally presses on critical tissue that suddenly causes a dog’s life to hang in the balance. Emergency surgery may be required to excise as much of the growth as possible.

A tumor can also, seemingly out of nowhere, begin to hemorrhage copious amounts of blood. In a dog with hemangiosarcoma of the spleen, the tumor can grow as large as a baseball, if not larger, without causing any outward symptoms. Then suddenly it will rupture. A dog can lose so much blood by bleeding internally that all of a sudden she becomes too weak to stand, even though just a day earlier she was out romping. The same kind of cancer can affect the heart and can suddenly bleed into the pericardium — the sac around the heart. Because of the extra pressure there, the heart gets squeezed to the point that it can’t adequately pump blood to the rest of the body. This particular condition is called hemopericardium.

Breeds most prone to hemangiosarcoma, which is actually a cancer that affects the cells that form blood vessels, are large breeds such as Labradors and shepherds. It occurs commonly enough that when a large-breed dog comes into our emergency service collapsed, we check immediately for a ruptured tumor in the spleen. In such cases, the cancer can’t be cured, but emergency surgery to remove the spleen (or in the case of cardiac hemangiosarcoma, using a needle to draw excess fluid from around the heart) can keep a dog comfortable — and perhaps provide her with several more months of life.

One other type of malignancy that can appear seemingly out of nowhere is brain cancer. Usually occurring in an older dog, the tumor may not be apparent until the dog suddenly starts having seizures. The bad news: treatment can be expensive — easily up to $10,000 between the surgery and the radiation that may be recommended afterward. It’s no small chunk of change if you don’t have health insurance. The good news: the prognosis is often excellent. If the tumor is deemed reachable with surgery, the dog can be afforded two to three more years of high-quality life.