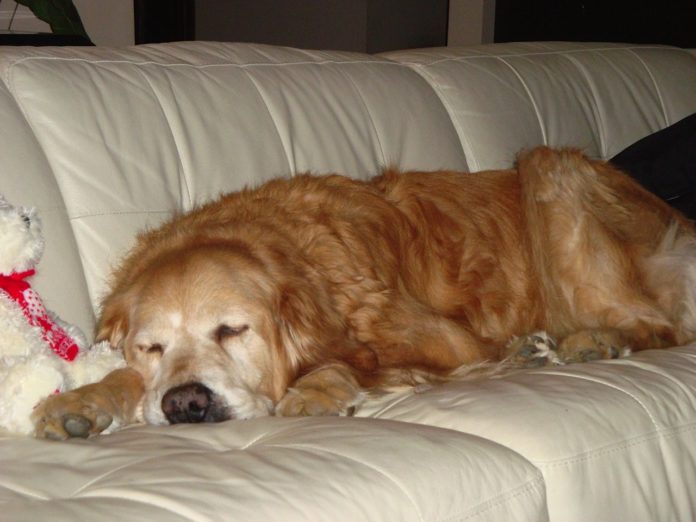 There are six types of cancer that make up the majority of malignancies striking older dogs: lymphoma (cancer of the lymph nodes), osteosarcoma (bone cancer), mammary cancer, mast cell tumors (mast cells are immune cells found all over the body), soft tissue sarcoma (cancer that takes hold in connective tissue like muscles and nerves), and one called hemangiosarcoma. Hemangiosarcoma, with its grim prognosis, may be the diagnosis a dog owner least wants to hear. Chris Stickell of Monkton, Maryland, has now heard it twice — first with one of her golden retrievers, and then with another one from the same line, 10-year-old Bailey.

She found out with Bailey when she took him to an emergency trauma center a few months ago because of poor breathing and what appeared to be some abdominal distention. She thought it might be bloat, but after some diagnostic testing, she learned about the cancer.

Could there be a genetic predisposition, Ms. Stickell wants to know? Is that why both dogs from the same line got it? It’s a plausible avenue of thought. Tufts veterinary geneticist Jerold Bell, DVM, says that research has already identified genetic markers “that segregate with higher risk of developing hemangiosarcoma, [but] no specific genes have been identified….This is a project that is still in the development stage and needs to be further worked out,” he comments.

Another way of putting it: the genetics haven’t been nailed down, but it’s not outrageous to wonder whether two dogs from the same line both ended up with hemangiosarcoma because of a shared genetic propensity. Indeed, goldens in general, along with other large-breed older dogs, most notably German shepherds and Labrador retrievers, are especially prone to this type of cancer, and that’s in all likelihood not a genetic coincidence. Genetic predisposition or not, just what is hemangiosarcoma? And how do you deal with it?

Where hemangiosarcoma strikes
Hemangiosarcoma is a cancer of the cells that form blood vessels. It can originate in any tissue that contains blood vessels, meaning pretty much anywhere in the body, but the most common location is the spleen. That’s an organ in the abdominal cavity that stores red blood cells as well as platelets and some other cells. It’s also the organ that helps to rid the body of old or damaged red cells. Some 80 percent of hemangiosarcoma cases occur in the spleen.

Another common site is the heart. That’s particularly problematic. Hemangiosarcoma in that organ causes bleeding into the pericardial sac around the heart, and even very small quantities of blood in the sac can affect the heart dramatically, specifically by keeping it from filling properly. In some cases, that can lead to heart failure. That is, it takes much less bleeding for cardiac than for splenic hemangiosarcoma to be life-threatening.

Bailey’s hemangiosarcoma appears to have started in his spleen — but has spread to his heart. During his diagnostic workup, Ms. Stickell says, “he was determined to have a pericardial effusion which was tapped and revealed bloody fluid.”

But it doesn’t really matter where hemangiosarcoma starts. The incidence of its spread from the blood vessels to other tissues is virtually 100 percent. Typically, from the spleen, hemangiosarcoma spreads to the liver. From the heart, it most frequently goes to the lungs.

What a dog owner might notice
Signs of the disease will vary depending where in the body hemangiosarcoma develops. If it’s in the spleen, sometimes there are no discernible symptoms whatsoever. If it’s large enough, however, you might be able to see that the abdomen is enlarged — no doubt the reason Ms. Stickell thought Bailey had bloat.

Another sign can occur if the tumor ruptures. It can cause bleeding into the abdominal cavity, making a dog weak and leading to collapse or fainting. The rupture itself can lead to immediate death, a not uncommon scenario if the hemangiosarcoma is growing in the heart.

Whatever the signs, hemangiosarcoma is diagnosed with ultrasound, as was Bailey’s. Ultrasound doesn’t definitively say that what’s showing up is cancer, but other causes can be ruled out based on the appearance and placement of the tumor. The ultrasound will also suggest if the cancer has spread to the liver, while a chest x-ray will help indicate whether it has spread to the lungs.

Treatment options
If the cancer hits the spleen, removing it through surgery (it’s called a splenectomy) is the basic treatment. A dog, just like a person, does not need a spleen; it is not an absolutely essential organ.

But if the hemangiosarcoma strikes the heart, a veterinary surgeon can remove not the heart itself, of course, but the diseased tissue. Tufts veterinary surgeon John Berg, DVM, who serves as editor-in-chief of Your Dog, says that splenectomies are more commonly performed than heart surgeries for dogs with this type of cancer, but it’s not simply because the disease more often strikes the spleen or because the heart surgery is somewhat more involved, or because recovery takes a little longer. It’s because “people are put off by the idea of heart surgery,” he says. “They hear ‘heart’ and ‘cancer’ and feel too uncomfortable to green light the operation,” even though dogs who have the surgery tend to come out okay.

Following the surgery, chemotherapy is frequently recommended because the cancer is so apt to metastasize. The chemo attacks cancer cells all over the body (whereas radiation is targeted at one spot). Unfortunately, despite the chemo recommendation, the data on whether chemo actually helps are somewhat cloudy. Thus, says Dr. Berg, “one can conclude that if the chemo helps, it probably doesn’t help dramatically.” A veterinary oncologist can discuss the choice with you when it comes to your own dog, taking into account the specifics of your pet’s case.

Survival time
Survival time after the surgery is limited to three to four months. They’re good months, particularly after removal of the spleen if that’s where the cancer is. The recovery is fast, with the dog back on his feet within days. Moreover, quality of life is not diminished during those last months; the dog doesn’t waste away while getting worse and worse. The time of actually feeling sick is quite compressed, with the dog feeling healthy until the cancer shows up somewhere else in the body.

Since by the time Ms. Stickell’s dog Bailey was diagnosed the cancer had already spread from the spleen to the heart, she decided not to opt for the surgery but to give him the best quality of life he could have until he made it clear that life was no longer what he wanted. At the time of this writing, four months after his diagnosis, he is, against the odds, still comfortable and enjoying the love and care of his family.

“He continues to eat well,” Ms. Stickell reports, “still loves rides and walks, though we have shortened his usual two-mile walk. His exercise tolerance is definitely limited, and he spends more time resting although you might attribute this to his age alone if you weren’t aware of his diagnosis. Otherwise the only significant change we are aware of is that he makes a kind of grunting sound when he assumes a prone position. We will continue to allow Bailey to do what he enjoys doing until he reaches a point where that is no longer the case.”

A dog lover after our own hearts — and no doubt yours, too.