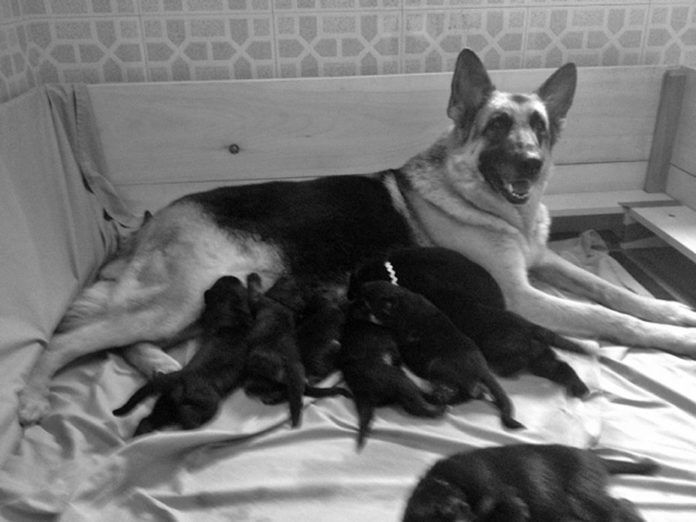 Easy was not having an easy time of it. The German shepherd, pregnant with nine puppies as confirmed by radiographs, was in hard labor with “really heavy contractions,” says her owner Cindy Miller — but none of the contractions were adequate to deliver her babies. It was getting to the point at which both the mother and her pups would be in serious distress.

At around 11 p.m., Ms. Miller drove Easy to the emergency room at Tufts’s Foster Hospital for Small Animals, about 40 minutes away from her home. “She was still having contractions,” Ms. Miller says, so “we sat in the parking lot to make sure she wasn’t going to deliver” on her own. Finally they brought her inside, and it turned out she was low in calcium. “They put her on a calcium drip, and she had her first puppy.” Administration of calcium, which assists in contraction of the uterine musculature, can occasionally be helpful to mothers who are struggling to deliver puppies.

A while went by — “now it’s about midnight,” Ms. Miller says — and Easy wasn’t delivering any more puppies, so she was given oxytocin — the same hormone given to some women to induce labor. A second puppy was born, but then nothing. “After a couple more hours,” Ms. Miller recounts, “the doctor gave her another oxytocin shot, and she had a third puppy an hour later and then a fourth right away after that.” Three more hours went by, but no more babies came, at which point Easy received yet another dose of oxytocin.

After more time went by, the doctor said there was no choice but to perform a C-section. But while Easy was being prepped, she delivered another puppy. The surgery was delayed, Easy then received some more oxytocin and calcium, was walked around outside, and delivered two more babies. Seven had now been delivered. But the last two wouldn’t come.

So around noon, after most of the puppies had been delivered vaginally, Easy was taken to surgery and the last two were delivered by C-section. “They were way up high,” Ms. Miller says. “They’re alive and well, but they would not have come out on their own.”

It’s not an altogether uncommon scenario. “We probably do one to two C-sections a month,” says Your Dog editor-in-chief John Berg, DVM.

The length of a normal dog pregnancy is roughly 65 days, or just over nine weeks, as opposed to nine months for a person. But it may be hard to tell how close a dog is to her due date. “A lot of times, unless it’s a breeder who knows exactly when his dog has been impregnated, people don’t know how far along their dog is,” says Dr. Berg. “They tell people, ‘Any week now.’ Sometimes they don’t even know their dog is pregnant. An x-ray taken for some other reason reveals the pregnancy.”

Imaging via x-rays or ultrasounds can’t pinpoint exactly where a dog is in her pregnancy, but it can help. A puppy’s skeleton will show up on an x-ray around day 42 — six weeks in. A heartbeat will be detected on an ultrasound about three weeks after conception.

If you do know your dog is pregnant, it’s not a bad idea to take her to the doctor for some imaging so you know how many puppies to expect and can have a better idea when they will be born. That way, you can be a better midwife. The dog won’t need you to actually help bring her puppies into the world, but you can assist her in setting up an area for whelping, or birthing. (You can shield her from being bothered as she’s whelping, too.) When a dog is near term, she’ll start brooding and begin to build a nest with rag strips or pieces of paper that you provide for her.

It’s best if you designate a fairly well-trafficked spot as the whelping area, say, the mud room off the kitchen or a hallway near a lot of the action rather than the basement or garage. That’s what Ms. Miller did, setting up a little whelping room right next to her kitchen. Puppies have the best chance of becoming good pets when born pretty much right into the action of the human family. It’s the beginning of their acclimation to living among a species other than their own, and they should be picked up and cuddled — often — in the weeks after birth, when they are still being nursed by their mother.

As the time draws near for your dog to go into labor, you might want to start taking her temperature once or twice a day. A dog normally has a temperature of about 102 degrees Fahrenheit, but when it drops to the 99- to 100-degree range, she’s probably within 24 hours of labor and maybe as close as eight hours. You won’t notice anything different about your pregnant dog when her temperature drops. She’ll seem the same as she has throughout the pregnancy.

Once labor starts, though, changes will become evident. There are three stages of labor, which in animals is often termed parturition.

Nonvisible uterine contractions. You won’t be able to see the abdomen contracting at this point, but the dog may very well get restless and anxious. She may also shiver, pant, seek seclusion, or go to her whelping area to nest. This stage can last up to 24 hours.

The dog delivers the puppies. Up to about 30 minutes before each puppy begins to be born, the contractions will indeed become visible. These are the type of contractions Ms. Miller was seeing when she brought Easy to Tufts.

Delivery of the placenta. After the birth of each puppy, its placenta will come out. There can be up to about four hours between each puppy’s emergence into the world, meaning that a labor from start to finish can easily average 36 hours or more.

The above description is about labor and deliveries that go textbook style. Then there are abnormal situations — the inability to deliver one or more of the puppies. It’s called dystocia, and it’s estimated to occur in about one in every six dogs. Among the breeds more susceptible are English bulldogs, because of their very large heads. They are hard to push through the vaginal opening. Other breeds more prone to dystocia include Scottish terriers, Chihuahuas, Pomeranians, Irish wolfhounds, and Great Danes. But a dog of any breed, and also a mixed breed, can have trouble delivering her pups.

The problem can be either with the mother or with the fetus. When there’s a problem with the mother, in most cases it’s in the form of primary uterine inertia — the single most common cause of dystocia. For poorly understood reasons, the uterus just doesn’t contract like it’s supposed to. A less common maternal cause for problems with delivery is a small pelvic canal, perhaps because of an old pelvic fracture that never healed properly (one reason pelvic fractures are often repaired surgically in dogs is to prevent dystocia later in life).

Fetal causes for an inability to deliver include a fetus who’s very large (perhaps the father is a huge dog but the mother is not). Some fetuses are also mal-positioned.

In any case where there’s an obstruction — a head that is too large, a pelvic canal that is too small, a puppy that is mal-positioned or simply too big — a C-section is called for. You should suspect obstruction if the dog has passed the first, long stage of labor and her contractions are visible with her very strong efforts, but no puppy is emerging after 30 minutes. Rush the mother to the hospital — the fetus can die, and so can she if the situation gets bad enough. Such a situation might not happen with the first pup. It may be the second, or the fourth, or sixth (a good reason to have your pregnant dog x-rayed during pregnancy — so you know how many puppies to expect).

Also take your dog to the hospital for a C-section if more than four hours pass between the delivery of one puppy and the next. It shouldn’t take longer than that, vigorous contractions or not.

When the problem is not an obstruction but primary uterine inertia, a hospital visit is also necessary. Uterine inertia is not as easy to recognize as an obstruction, but taking the dog’s temperature will help. If it has gone through the telltale drop but the dog has not shown signs of the first stage of parturition within 24 hours, she needs to see a doctor. Similarly, if the first puppy is not delivered within 24 hours of the onset of stage 1, or if more than four hours pass between puppies, veterinary assistance is called for. Once the veterinarian confirms that the problem is not an obstruction, he will administer the hormone oxytocin to induce labor, which is also given to some women to bring on labor if, say, their water has broken but strong contractions do not begin to come on.

Oxytocin does not always work for dogs, even when the vet waits and then gives another dose. In fact, says Dr. Berg, “maybe 30, 40, percent of the time, the puppies will come.” If they do not, a C-section is performed. In some cases, oxytocin works for delivering some, but not all, of the puppies. That’s what happened in Easy’s case. The hormone did induce labor to the point of helping her to push out seven of her babies. But for the final two, the surgeon on duty had to make an incision in her abdomen and then another one in her uterus —the classic C-section procedure — to remove her remaining two pups and their placentas.

After a C-section delivery, the veterinary technicians in the delivery room will clamp the umbilical cords and use suction bulbs to clean the newborns’ airways so the puppies can start breathing. They also stimulate breathing by rubbing the pups. “Then we kind of rub their bum areas so they start urinating,” Dr. Berg says. “Afterwards, we dry them and put them together under a blanket.

“Everybody at the hospital likes it” when healthy pups are born via C-section,” Dr. Berg adds. There’s always a good feeling around the tiny new lives.

Within a few hours of the births, once the mother wakes up from the C-section, she is sent home with her babies so she can nurse them in their normal environment. Even though they came into the world with medical assistance, they generally thrive beautifully.

Easy’s babies are certainly doing well, as the photo shows — as is she. “She walked out of the hospital four hours after the surgery as if she hadn’t had a C-section,” Ms. Miller says. “She came home, was wide awake, and nursed her puppies.” Of course, that was some time after the doctor on call, Dr. Alex Lynch, went out and got Ms. Miller some coffee. It was now 4 in the afternoon, and Ms. Miller had been there since midnight.