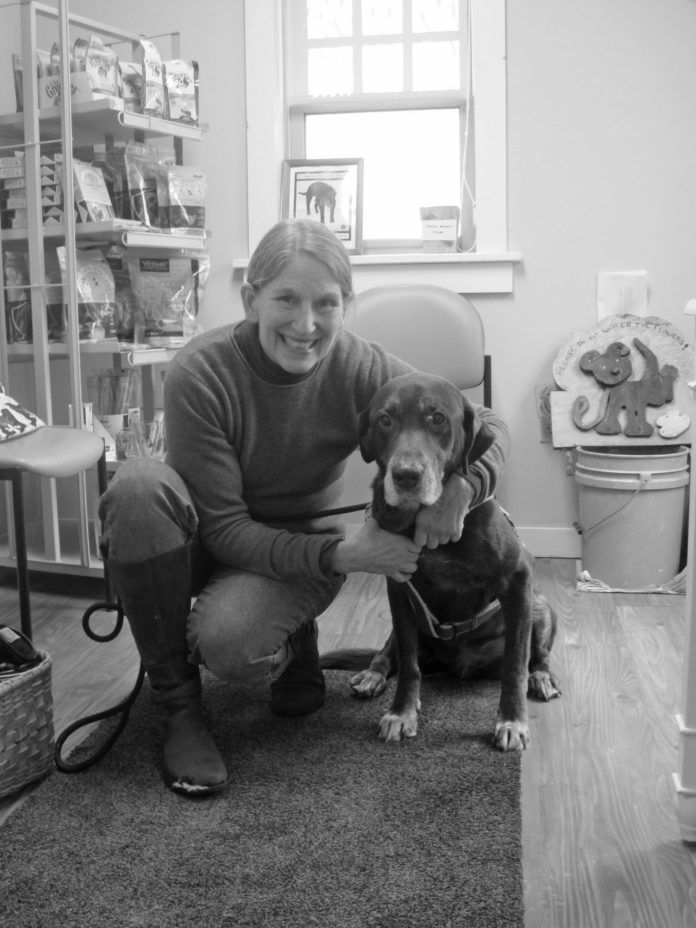 It was when Sam-I-Am started coughing continually and breathing heavily, particularly in warm weather, that Lucy Keefe decided to bring the 12-year-old chocolate Lab to see John Berg, DVM, a soft tissue surgeon at Tufts and the editor-in-chief of Your Dog. It turned out Sam had developed a condition called laryngeal paralysis, most commonly seen in older, large-breed dogs such as Labs and golden retrievers.

Laryngeal paralysis is, literally, a creeping paralysis of the larynx. Gradually but unmistakably, a dog will develop difficulty inhaling. It may be accompanied by a weakening of his voice. If the problem is far enough along, you may notice that he turns blue at the gums, meaning he’s cyanotic; sufficient oxygen can’t make it into the blood and all the body’s tissues. He may even collapse at times.

Many people are surprised at the connection between the larynx and breathing. They think that because the larynx houses the vocal chords and is colloquially referred to as the voice box, all it does is give a dog the ability to vocalize. But the larynx has a larger function. A long, cylinder-shaped organ made of cartilage that lies between the mouth and the trachea (windpipe), its role is to open widely when a dog (or person) breathes in so air can reach the lungs — and then the rest of the body. But in some older dogs, the larynx becomes paralyzed near the mouth end. Why has not been known, although inroads into the etiology of this disease are being made.

Not only does laryngeal paralysis cause difficulty breathing, it can also be one of the causes in an affected dog of aspiration pneumonia, a condition that occurs when food or water makes it way to the lungs. Just as the larynx is supposed to open for inhalation, it’s supposed to close completely during swallowing. But if it is working poorly, complete closure won’t occur. Not uncommonly, a dog will be diagnosed with laryngeal paralysis when his owner brings him to the veterinarian for the pneumonia, which is a lung infection that on its own can cause shortness of breath, along with lack of appetite, lethargy, and fever.

The inability to breathe in effectively that occurs with laryngeal paralysis — inspiratory dyspnea — can sometimes come on rather suddenly, or at least get much worse in hot weather, as was the case with Sam. It makes sense when you consider that dogs don’t sweat over their whole bodies but must cool themselves by panting. If a dog can’t pant because his larynx won’t move, he becomes very hot. That, in turn, makes him anxious and stressed, so he struggles even harder to take breaths, making the condition all the worse.

More commonly, though, laryngeal paralysis runs a slow, progressive but undeniable course, perhaps exacerbated by exercise. That’s why an owner might not recognize it for a while after it has developed.

A veterinarian confirms the diagnosis of the condition with a laryngoscope, a tubular instrument with a light attached. It is put at the back of a dog’s mouth while he is under light anesthesia. If the larynx does not open like it should, the doctor will be able to see it right away and either perform a surgery right then or, in mild cases, wait and see if breathing problems progress to the point of requiring a surgical solution.

The operation to fix the problem will not fix the paralysis. With laryngeal paralysis, the nerves that allow the larynx to open and close are diseased, and no surgery — or medicine — will be able to make them work again. Rather, the operation is simply a mechanical way to keep the larynx open permanently.

There are a couple of types of surgery that will do the trick, but the one most commonly performed is called a laryngeal lateralization, or laryngeal tie-back. The veterinarian gets to the larynx via a small incision on the side of the neck and then places a suture that holds open the front of the larynx on one side, keeping it, literally, tied back.

The other side remains closed. That reduces the chance that food will go down into the lungs and cause aspiration pneumonia. After a tie-back, there still exists a risk for aspiration pneumonia. But that’s mostly in the first 24 hours after the operation, when the dog is not completely awake after the anesthesia. It’s for that reason that dogs are often kept off food for the first day. A risk does remain for the rest of the dog’s life after that, but it’s not as high as during the period right after surgery.

Sam came through his surgery with flying colors. “He healed quickly and didn’t seem bothered by it at all,” Ms. Keefe says.

Because a tie-back doesn’t fix the paralysis, it doesn’t make a dog “normal.” But it does virtually eliminate much of the breathing difficulty. A dog can pretty much go back to his prior level of activity within days of the surgery.

Ms. Keefe can attest to that. Sam, having already celebrated his thirteenth birthday, “still looks like an old dog,” she says, “but “he’s perky, happy, and glad to run around the woods, as he did before. It’s not a problem for him to go very far, except for his arthritis. His breathing is fine. He even seems happier after the surgery.”