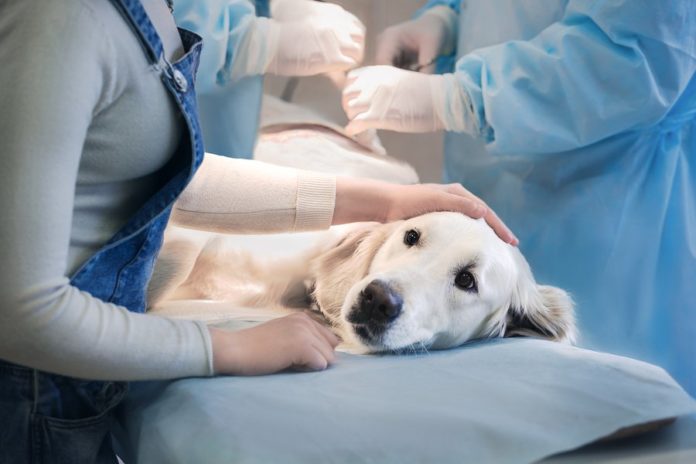 With all the television dramas centered around hospitals, it’s hard not to pick up some medical lingo. Many Americans know, for instance, that “Code Blue” means a patient has gone into cardiac arrest. The only chance for the patient recovering is CPR — cardiopulmonary resuscitation performed with the crash cart and paddles.

Do such extraordinary measures exist for dogs? Yes, particularly if your dog is at a referral hospital with an intensive care unit, like the Foster Hospital for Small Animals at Tufts. And any one of three color codes may be in order: Code Red, Code Yellow, or Code Green. Who decides which it’s going to be? You.

How do you make a decision?

First, know that you are not deciding in a vacuum whether to try to have your dog resuscitated should his heart stop in the hospital. The veterinarian will give her considered professional opinion. But you’re definitely the orchestra leader here, and it comes down to how aggressive you want the veterinary team to be in working to bring your dog to life should he stop breathing.

Often, with people, the aim is to endeavor to bring the person back no matter what, even if his quality of life won’t be what it once was. But what if you have an old dog with cancer? Do you put a dog through the physical rigors of CPR if his quality of life will be no better than it was — and will only diminish? In other words, with dogs, quality of life takes center stage more than it does with people, for whom quantity of life tends to be the order of the day. But even there, people and their families often draw a line. If a human family member is very old and very, very sick, often that person, or the person’s closet relatives, will put a “Do Not Resuscitate” order in place, meaning that the medical staff at the hospital should let the person go rather than try to bring him back.

It’s the same with a canine family member, and it’s the meaning of Code Red. That’s the color for “Do Not Resuscitate.” But just like with people, you want to have this discussion with the doctor ahead of the fact, if possible.

Having the conversation with your dog’s doctor

Tufts emergency and critical care veterinarian Armelle de Laforcade, DVM, acknowledges that discussing whether to put a “Do Not Resuscitate” order in place is “kind of a hard conversation to have,” both for the family and for the doctor. “A lot of people haven’t quite come to terms with the fact that their dog, even though perhaps already quite sick, could die. They’re investing a lot, both financially and emotionally, to take care of him. So the doctor is inserting into the conversation that this could happen.”

Yet it’s important to think about this in advance of a crisis. You want to be making the choice with a clear head, not in the throes of an emergency situation, if you can avoid it. “As someone who works in the emergency room,” Dr. de Laforcade says, “I can say with confidence that the night is long, and things can turn on a dime.”

Working it through involves considering the dog’s condition to begin with. Let’s say a perfectly healthy dog is hit by a car. He’s in rough shape, but all his underlying organs are okay. “That’s a case where we may want to be aggressive because the animal’s chances of being resuscitated and going on to live an uncompromised life are actually pretty good,” Dr. de Laforcade says. Thus, the owner might decide ahead of time to issue a Code Green: acting as aggressively as possible to bring their dog back on the table. With a Code Green in place, a veterinarian will go as far as to make an incision in the chest to conduct internal cardiac massage. The doctor literally holds the heart in her hand and squeezes it to get blood flowing to vital organs, including the brain.

On the flip side, if there’s a significant disease process unfolding, like cancer, and the dog is already quite old and sick, you might choose ahead of time to put a Code Red in place. “You want to ask yourself, ‘What am I trying to achieve here?’ Dr. de Laforcade says.

Of course, owners don’t always do what a veterinarian might anticipate. In some cases, it comes down to money. The doctor feels strongly that a dog would be able to survive CPR and come back to have a good quality of life for a significant amount of time, but coming back means more time in the hospital, probably more time in the intensive care unit, and a significantly bigger bill. Some people simply can’t afford that unanticipated expense, which can run into hundreds, and sometimes thousands, of dollars, and they need to make the very sad decision to put a DNR in place no matter what.

Dr. de Laforcade emphasizes that there’s nothing wrong with that, even though it’s an awful choice to have to make. What’s important she says, is that you love your dog and take the best care of him possible from the day you bring him into your life until the day he leaves this world.

What can be even more difficult from the doctor’s point of view, she says, is people not putting a DNR in place even though it’s clear from a medical standpoint that CPR is not the right choice; the dog might even survive cardiac arrest, but only for a very short time and with a lot of pain and lack of mobility. “The person is struggling with saying good-bye,” she says, “even though the good-bye is going to happen shortly and the dog is going to suffer in the meantime.”

Because people’s emotions sometimes get out in front of the inevitable facts, and also because it’s not always clear ahead of time how a dog is going to fare in a crisis, Dr. de Laforcade says that often the best option is not to put a Code Green or a Code Red in place but a Code Yellow. It provides the opportunity to take a step back and quickly think things through even in the midst of a crisis.

With a Code Yellow, the veterinarian starts CPR. She’ll gives drugs to try to make the heart start up again and begin chest compressions to create some blood flow. And she’ll call the owner. “As a critical care vet,” she says, “my perfect world is one in which I start CPR, make an assessment of how likely it is to work, and then talk with the owner so she can make an informed decision about whether to proceed and, if so, how aggressively.

“The owner can ask at that point, ‘Do you think we have a chance of getting him back?’ And I can say, ‘It looks like it might work’ or ‘We’ve already been at it for some time…’ In other words, the doctor can provide the best information possible based on what is actually happening at the “no turning back” point. Another way of putting it: a yellow sticker affixed to a dog’s cage because of a conversation that has taken place before a crisis means that a second conversation will take place in the heat of the moment and the owner can be an integral part of the medical decision-making.

When to have the conversation

If your dog has to spend some time in the hospital — let’s say he’s six years old and tore a ligament in his knee and has to have a surgery to repair it — it’s probably not crucial that you talk with his doctor about what to do if he stops breathing. It’s a routine procedure, and the chances are overwhelmingly high that the operation will be uneventful and the dog will soon be back to himself without any hiccups. But for those dogs who are admitted right into Intensive Care or come in severely ill or physically traumatized, “it’s worthwhile to talk with the vet about which code to use so that everybody’s wishes are known,” Dr. de Laforcade says. “Animals in the ICU are the sickest ones in the hospital. They could have an event at any time. That, in fact, is why the ICU is staffed with doctors and veterinary technicians more intensively than in any other part of the hospital — 24 hours a day.”

In the event that your dog does end up in the ICU or has an emergency situation, his owner “should be reachable at any time of day or night with a cell phone,” the doctor says. Especially in the case of a Code Yellow, communication is everything. “Often,” Dr. de Laforcade notes, “I’ll tell owners ‘the next 24 hours are very important,'” meaning that an extremely serious conversation may be imminent.

Of course, in the best of all possible worlds, an owner should be available even if her dog comes in for a routine procedure or surgery. Anesthesia is excellent but is never 100 percent guaranteed, even for people. You just never know when the option for CPR will pop into the equation.