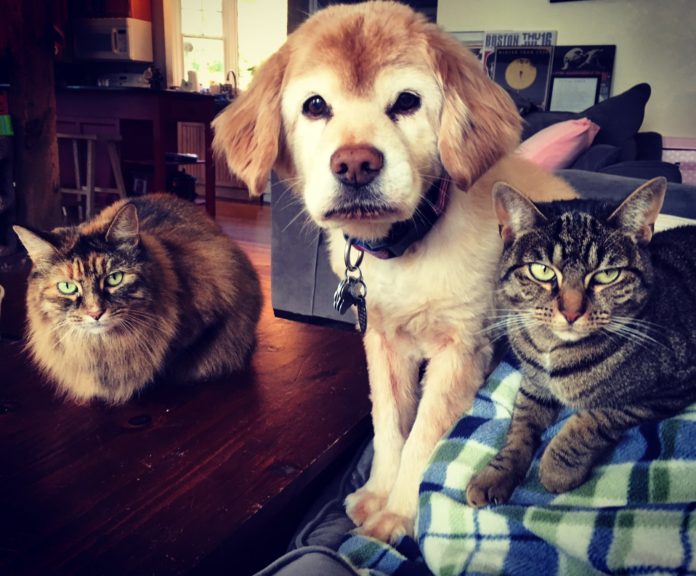 Tufts veterinary nutritionist Deborah Linder, DVM, DACVN, doesn’t just counsel people who have to make sure their household pets don’t eat each other’s food. She has to contend with plate-sharing issues among the animals in her own home. “I have a dog and two cats,” she says, “and everybody wants to eat everybody else’s food, but they all have different medical diseases and have to be on separate diets. Yet they all have to be fed at the same time or they get very upset and go around howling.”

It’s quite the situation. Her golden mix, MD, has insulinoma — kind of the opposite of diabetes. Because of a tumor on her pancreas, she secretes too much insulin, putting her at risk of dangerously low blood sugar, known in medical terms as hypoglycemia. The condition ups MD’s chances of erratic dips and spikes in blood sugar in general. If she’s not fed regularly and consistently, she’ll have seizures, which means Dr. Linder has to feed her very small meals four to six times a day, religiously.

Her two cats, Chestnut (aka “Evil Cat”) and Leftie (so named because she’s missing a limb) both have heart disease issues. Chestnut needs a low-sodium diet, and Leftie needs less food than Chestnut because she is smaller (weighing in at only 6 pounds compared to her 10-pound “sister”). Too many calories leading to excess weight would put too much pressure on the three legs she does have; thus, keeping her trim is a high priority. To complicate matters, Leftie is very aggressive about food. “Whenever it’s available,” Dr. Linder says, “she attacks anyone and everything that’s around her” in order to get to it.

How is a pet owner supposed to keep dogs (and cats) away from each other’s food when optimal heath — and maybe even life — is at stake?

Drilling down to understand the severity of the problem

Cases of dogs getting into each other’s — and other pets’ — food when medical safety is at stake is a common reason clients come to see Dr. Linder. For example, one dog may have advanced kidney disease and need a reduced-phosphorus diet, while reduced phosphorus for the healthy dog could cause a nutrient deficiency, leading to destruction of her own red blood cells. Or one dog has had recurrent bladder stones and needs a special diet that can reduce her tendency to form the stones. Or one is quite overweight while the other has good body condition, necessitating a regular diet for the healthy-weight dog and one lower in calorie density for the overweight pet.

In all cases, the first question, Dr. Linder says, is, “Do the two animals have to be fed separate diets? Is there a situation where two dogs who always ate together and shared plates now have to be separated at mealtime?” Another way of putting it: how down is the downside of one pet eating the other’s food? How strict does the pet owner really need to be?

For something like heart disease, where a lower-sodium diet can help a dog avoid an extra burden on the heart, it’s not going to be the end of the world if she gets into the wrong food once — not great, but not dire. Ditto for the overweight dog who manages to make her way to the calorie-dense kibble once in a while.

But for a condition like diabetes, a dog with the disease getting into the wrong food “possibly even one time could create serious problems,” Dr. Linder says. And for a dog prone to pancreatitis, a severe gastrointestinal problem sometimes caused by too much dietary fat, “you can trigger an attack with just one wrong meal.” In cases with such potentially severe consequences, she comments, she has to consider whether she can fix the diet — find one that will work for both the healthy animal and the one with the medical condition — or fix the environment — change how and where the two pets are fed so that neither can get into the other’s food. Fixing the diet is often a lot less complicated than fixing the environment, especially in households with a lot of pet feeders like kids and babysitters. If all can keep feeding just one diet instead of doling out different foods to different pets every single meal, there are fewer chances for health-damaging mix-ups.

Fixing the diet. A lot of times Dr. Linder can help by finding a compromise food that might not be ideal for both animals but that will do the trick and that a household can adjust to without major alterations. An example of that would be a low-sodium diet for heart disease. All the dogs in a household can go on a low-sodium diet, whether they need it or not. It might not taste as palatable as a diet with higher salt (depending on a dog’s preferences), but it will most certainly mitigate the symptoms of disease for the dog with the heart problem, and both dogs might accept the food better knowing that the menu has simply changed. That’s easier than feeding two different diets since you can’t explain to a dog why her housemate gets a different food, regardless of whether it’s actually yummier or not.

Food for weight management can often be the same for both pets, too. Kibble to help a dog lose weight generally has fewer calories per cup, often because it has more bulk in the form of non-caloric fiber to help hungry pets feel full. But you can just give the dog with ideal body condition more of the food — extra fiber isn’t going to hurt her (as long as she can tolerate the extra bathroom trips!).

Fixing the environment. Sometimes, one diet for all the dogs in a household is just not going to work. Take the case of one dog having kidney disease and the other having healthy kidneys. Early in the game, as soon as she is diagnosed, in fact, the dog with kidney disease may have to go on a low-phosphorus diet, one purchased by prescription through a veterinarian. The normal amount of phosphorus burdens already-compromised kidneys, and reducing that nutrient can slow the progression of symptoms. But a healthy dog absolutely should not eat the low-phosphorus diet, or she could develop a deficiency of that nutrient that can cause a heath problem of its own. The diseased dog will end up with too little phosphorus also, but that’s a tradeoff made to extend her life.

So how do you keep the two dogs separate for their meals? For one thing, ad lib feeding — leaving the kibble out and letting the dogs eat when they happen to get to it — often goes out the window. The possibility of the dog with kidney disease getting into the food with normal amounts of phosphorus — and vice versa — is just too risky. The dogs simply have to learn to eat as soon as the food is put in front of them (not a problem for many dogs) because the bowl is going to be picked up in a few minutes whether the food has been consumed or not.

You may also have to create physical barriers. If two pets are of widely differing sizes, you can create a door within a door that allows one to go through and the other not. This works well when one dog is obese, Dr. Linder comments. That dog can be fed on a certain schedule, while the thinner, smaller dog who can fit through the door and doesn’t overeat can have his bowl left down at all times.

Baby gates also work well, Dr. Linder says. That way, the pets can be near each other and can see each other while eating but can’t actually get to each other’s food. It allows them to remain social without any dietary danger.

In her own home, Dr. Linder creates physical barriers in a couple of different ways. With the two cats it’s easy. Because Leftie is missing a limb, she can’t get up on the counter. So Dr. Linder gives Chestnut her low-sodium food up there while Leftie, whose smaller rations of a calorie-controlled food really have to be doled out carefully to manage her weight, eats on the floor.

MD the dog stays in Dr. Linder’s bedroom with the door closed on the days Dr. Linder is at work. “I have her on an automatic feeder that goes off every few hours” in order to keep her blood sugar on an even keel, Dr. Linder says. “She would probably love to be out in the rest of the house with everyone else. But the risk is too high — she could have a seizure if she got into the wrong food.” MD is 14, though, so she accepts her lot graciously by sleeping most of the day away.

If baby gates, countertops, and special pet doors aren’t options, there are other ways of fixing the environment so that a dog with a medical condition does not eat the wrong food. One is to make a habit of walking one of the dogs while the other eats, then taking the second dog out while the one who was being walked first dines. That way, there’s no chance of a mix-up.

Also, if your dogs eat fast, as many do, you can put the two bowls of food in different rooms and literally stand between them until both dogs finish their chow. That way, you, in effect, become the baby gate.

It’s okay to be firm, Dr. Linder says. In fact, it’s a requirement of good dog parenting in these cases. You don’t want to give in to your dog’s desire to eat another pet’s food at the risk of compromising her safety.