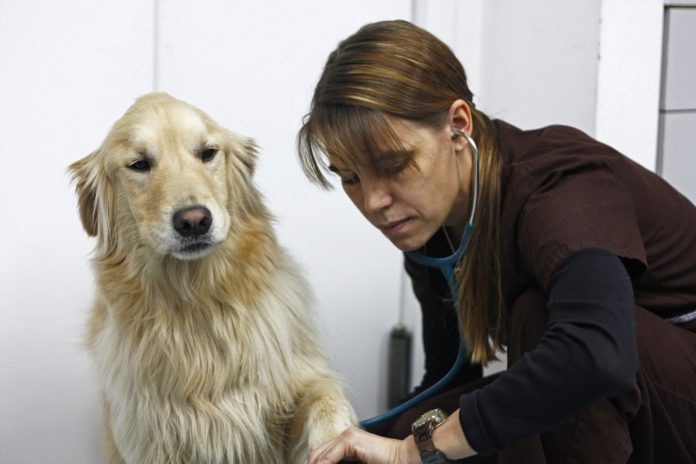 White coat hypertension is now a well-known phenomenon in people. Some patients become nervous enough about being examined by a doctor or nurse wearing the proverbial white coat in a clinical setting that their blood pressure rises transiently in response. The rise occurs because the nervous system constricts the blood vessels as part of the fight-or-flight syndrome, but the same volume of blood as always has to course through the narrower “tubing,” literally increasing the pressure on the walls of the arteries. The reaction is not without consequences. Some research has indicated that periodic increases in blood pressure in response to stressors such as a doctor in a white coat can be just as likely as constant blood pressure elevation to pave the way for conditions such as heart disease. Periodic wear on blood vessels leading from and to the heart apparently takes its toll.

Why are we stating this information in a newsletter devoted to the well being of dogs? Research shows that dogs can be prone to the same response. One study of retired racing greyhounds adopted as pets found that their blood pressure was significantly higher in a hospital setting than in their own homes. How much higher? At the hospital, their systolic pressure — the pressure exerted when the heart contracts to pump out blood to all of the arteries — averaged 24 points higher than when their owners took the dogs’ blood pressure at home. In a clinical setting, the dogs’ systolic pressure came in at an average of 154 mmHg. (The number means the pressure was forceful enough to drive a column of mercury up a tube to a level of 154 millimeters during each heartbeat.) At home, when measured by their owners, it averaged 130 mmHg. It was the same for diastolic pressure — the pressure of blood on the blood vessel walls between contractions of the heart — which is the lower of the two blood pressure measurements. It averaged 88 mm Hg in the hospital and 80 mm Hg at home.

Heart rate was significantly different, too: an average of 111 beats per minute in the hospital and 65 beats per minute at home. (Think of how agitated you are feeling in those instances when your own heart rate has almost doubled.) Even when the dogs’ blood pressure and heart rates were taken in their own homes by an investigator rather than the dogs’ owners, the numbers tended to be much lower than at the hospital. The hospital setting is clearly a stressor for many dogs.

The study on greyhounds is not the only one that suggests dogs are capable of having white coat hypertension. An earlier report on dogs of six different breeds — Siberian huskies, Labrador retrievers, Doberman pinschers, golden retrievers, Bernese mountain dogs, and German shepherds — also indicated that our canine friends can be nervous enough in the clinical setting to have a rise in blood pressure that can skew a clinical assessment of their overall condition. For all the dogs, the maximum systolic pressure at home was 145 mmHg, while the maximum diastolic pressure was 88 mmHg. In the clinical setting, maximum systolic pressure was 158 mmHg, and four dogs had diastolic pressure above 95 mmHg, when the cutoff is 80 mmHg (just like for people).

What it boiled down to is that none of the dogs would have been considered hypertensive from the at-home readings, while four would have been classified as having high blood pressure in the clinic. Their blood pressure was high in the doctor’s office even though they were taken to a quiet examination room and allowed an acclimation period of five to 10 minutes. Their pressure readings were not started until they appeared calm and relaxed, demonstrating that a dog that appears calm on the outside is not necessarily calm on the inside.

The observation that the same effect was seen in different dogs of various breeds is significant. The blood pressure of greyhounds is often reported to be 10 to 20 points higher than that of other dogs to begin with. It is assumed to be a physiologic adaptation that is part of what makes them such good racers. But the fact that white coat syndrome occurs in other breeds confirms that the syndrome does occur in dogs.

What does hypertension mean for a dog’s health?

The main detrimental effect of blood pressure readings that are falsely elevated by white coat syndrome is that they can impair a veterinarian’s ability to make an accurate diagnosis or monitor treatment. For example, kidney disease in dogs often results in chronic elevations in blood pressure, and it is important for veterinarians to be able to obtain accurate periodic blood pressure measurements in order to manage the condition. It’s also postulated that white coat hypertension could potentially contribute to the development of kidney disease. Over time, it might cause vascular changes in the kidney that reduce the kidney’s ability to function properly. “Hypertension makes the blood vessels very stiff,” explains Elizabeth Rozanski, DVM, an emergency and critical care veterinarian at Tufts.

You don’t have to be terribly adept at interpreting dogs’ emotions to know that some dogs absolutely hate going to the vet’s office. They struggle even about getting into the car and become visibly more agitated when pulled on their leashes through the front door of the clinic. Some believe that dogs can literally smell the fear of the other dogs via pheromones — distress signals a dog can send out. So how can you keep a dog calm enough so that the doctor will get a reliable blood pressure reading? After all, most people do not have the equipment or training to measure a dog’s blood pressure at home.

If a youngish or middle-aged dog checks out normally according to blood and urine tests on his annual or semi-annual doctor’s visit, the doctor probably won’t measure his blood pressure. But if, say, it’s noticed that his urine levels of protein are elevated, suggesting that protein is being lost through the kidneys, the blood pressure cuff is probably going to come out. “An older dog who comes in with mild kidney changes — that’s a dog we’re going to measure blood pressure in,” Dr. Rozanski says.

How can you make sure the reading is correct and that white-coat hypertension is not making the blood pressure seem higher than it is? Do everything possible to keep your dog calm. For instance, keep calm yourself; bear in mind that dogs often take cues from their owners. In addition, let him adjust to the exam room for five or 10 minutes before he gets poked and prodded. It may not solve the whole problem, but it should help. After all, people understand and can anticipate the cuff inflating and tightening around their arm and then deflating; dogs can’t. The vet will probably take your dog’s blood pressure several times at each visit. Repeated exposure to the procedure helps dogs feel more relaxed about it, allowing for truer readings. “Some dogs, when you first take their blood pressure, it’s through the roof,” Dr. Rozanski comments. “Then you give them a few minutes and they calm down.”

Research corroborates her observations. A study on beagles undergoing repeated blood pressure measurements showed a decrease in blood pressure over three weeks after acclimation to the environment and to the procedure itself. Other research has indicated that while some dogs never adjust to a hospital setting, the majority of dogs do adapt over time. (Unfortunately, greyhounds, a breed of dog with increasing popularity as a pet, do not appear to adapt well. For that reason, if the blood pressure of a greyhound needs to be checked because of suspected kidney disease, it might be best measured in the home environment, either by a vet who is willing to make a house call or by an owner who can learn how to perform the procedure.)

Treatment Protocol for Hypertension in Dogs

Dogs get the same medications for high blood pressure that people do, except that while treatment of people often starts with diuretics, which encourage fluid elimination through the urine, dogs are often initially treated with drugs that lower blood pressure directly, such as ACE inhibitors and calcium channel blockers “Diuretics tend to be less beneficial for dogs,” Dr. Rozanski reports.

Of course, she adds, a veterinarian will always look to treat the specific disease causing the hypertension. In people, hypertension can be idiopathic, meaning its cause cannot be determined; it’s just there by itself and treated by itself. But in dogs, it’s almost always caused by something. If it’s kidney disease, that’s going to require specific drugs and diets. If it’s a tumor of an adrenal gland, that, too, will require medical and/or surgical treatment in addition to treatment of the hypertension. Treatment of confirmed hypertension is almost always less effective if the underlying cause is not addressed.