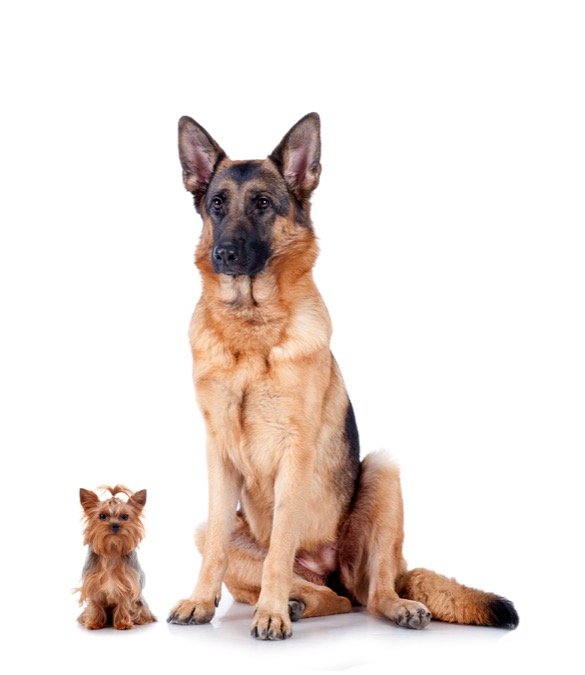 Riddle: Why is it that between species, the larger the mammal, the longer it lives (elephants go to about age 60, horses till 25 or 30, dogs up to a range of between 10 to 13, and mice to 2), but within any given species, larger animals die sooner? (A Great Dane might make it to age 8, while some Chihuahuas live to 18.)

Answer: No one knows for sure. But researchers are working hard to home in on answers.

The theories for why larger species live longer than smaller ones remain particularly wobbly. Some scientific investigators have posited that because larger species of mammals have slower metabolisms than smaller species, their bodies undergo fewer metabolic reactions day to day that create free radical compounds, which can cause organs to “rust” and also damage DNA. Once DNA is compromised, the body is less able to repair itself when something goes wrong.

The problem with this hypothesis is that the whole larger-animal-free-radical-damage thing doesn’t hold true across the board. It’s a line of reasoning that pretty quickly runs into potholes.

Researchers are doing better in working to figure out why within a species, the smaller animals will live longer, on average. It makes for particularly fascinating study in dogs, who can be so much more different in size than mammals of other species as a result of centuries of purposeful breeding. Consider that if people were as different in size as dogs, you’d think nothing of routinely seeing eight-foot-tall people and three-foot-tall people walking down the street. And they wouldn’t even be the Great Danes and Chihuahas of our species, respectively. They’d be more like very large Labs on one end and perhaps Cavalier King Charles spaniels on the other rather than the hugest and the tiniest possible. It’s for that reason that the differences in lifespan between short and tall people aren’t that great — and often overlap. Our adult differences in size — usually no more than a foot or so — are nothing like size differences between dog breeds. But what about the dogs? What is it about the small ones that lets them enjoy lives up to two or three times as long as some of the largest ones?

Some researchers believe it’s the metabolic energy that needs to be expended by large dogs to reach their adult height and weight that predisposes them to an earlier death. Consider that all dogs, no matter what the breed and no matter what size they will eventually become, are born looking more or less like little guinea pigs. Yes, a Great Dane at birth may weigh one to two pounds — much more than the few ounces a Chihuahua will weigh. But they’re still both tiny. What’s key is that the Great Dane has much farther to go — an adult weight of up to 200 pounds if it’s a large male, versus 6 1⁄2 pounds for a large-male Chihuahua.

All the energy the larger dog expends on growth takes away metabolic energy that would oth-erwise maintain health in the form of scavenging for free radicals that “corrode” tissue and repairing damage to cells caused by those free radicals. In other words, it’s a zero sum game: there’s only so much energy to go around in an animal, and if a lot of it is used up to get a dog to his adult size, there will be less available to take care of him once he gets there. That’s the theory put forth by scientists at Missouri University of Science and Technology and at the Second Hospital Affiliated to Heilongjiang University of Chinese Medicine in the city of Harbin, China, reporting jointly in the journal Aging. “It’s an energy tradeoff,” they say.

To make matters worse, they posit, rapid growth promotes cellular damage in the form of decreased antioxidant defenses in red blood cells and elevated free radical processes. This cellular damage accumulates during a puppy’s development, the scientists believe, and then has long-term adverse effects on large dogs’ health and longevity.

Researchers collaborating at Germany’s Max Planck Institute for Demographic Research and University of Gottingen, the Sorbonne in France, and our own University of Georgia see it pretty much the same way. “You can’t have it all,” they write in the journal The American Naturalist. Dogs and other animals cannot allocate unlimited energy to both growth and the maintenance of health, and “trade-offs between these traits are inevitable.” While large size can increase short-term survival, “growing large rapidly and maintaining a large body size might come at the cost of reduced survival later in life.”

These same researchers also took it a step further, designing a study to determine where in the lifespan the difference starts to catch up with larger dogs. Looking at death data from more than 56,000 dogs across 74 breeds, they asked whether larger dogs’ earlier deaths come from a) a high risk of mortality at the age at which dogs go from developing to aging; b) an earlier onset of the aging process, known by scientists as senescence; or c) a quicker pace of aging once aging starts.

They found that older dogs do not begin aging sooner in life than younger ones. The aging process starts somewhere around the age of two no matter what the breed or its size, at the point at which a dog crosses the threshold from the juvenile period to adulthood. They also found that while large dogs have a higher chance of dying once they reach adulthood and start aging, that effect on their overall mortality rate is a small one. It explains only 7 percent of the shorter lifespan of larger dogs. No, the bulk of the reason for earlier deaths among larger dogs, the researchers discovered, is that once aging starts, it goes at an accelerated pace compared to the aging rate of smaller dogs. In fact, coupled with the fact that larger dogs are slightly more inclined to die upon reaching maturity than smaller ones, the accelerated rate of aging once aging begins accounts for 96 percent of the variance in life expectancy among breeds based on their size. As the researchers put it, the adult life of large dogs “unwinds in fast mo-tion.” That’s why, for instance, a six-year-old breed of dog that weighs less than 20 pounds is the equivalent of roughly 40 in human years, while a dog greater than 90 pounds who is also six years old is the human equivalent of about 49.

It’s also why veterinarians start recommending geriatric checkups for small dogs around age 11 or 12, medium-size dogs closer to age 10, and large dogs as young as seven to nine. Their faster aging rate makes them reach “old age” faster and more prone to diseases like cancer, heart disease, and kidney disease — the three biggest life enders among our canine friends. It breaks down as follows, according to the re-search: on average, an increase of about a pound in body weight correlates with a loss of approximately one month of life expectancy.

Investigators are looking on the molecular level at what goes on inside a larger dog’s body that makes it age faster once the aging process gets underway. One possibility is that a growth hormone referred to as insulin-like growth factor 1, or IGF-1, might be pivotal in helping to mediate the trade-off between growth and survival/health once adult size has been reached. Consistently, IGF-1 blood levels of small dogs are lower than those of larger ones, and there have been reports of excessive secretion of growth hormone during the juvenile period in Great Danes compared with beagles. But such investigations are in the early stages. And it is not clear what fruit they will bear even if they come to be completely understood.

That said, researchers at the University of Washington and the College of Veterinary Medicine at the University of Georgia have only last year described a number of investigations and possible avenues of research specifically to slow aging in dogs as a way of ultimately getting at methods to extend the human lifespan through gene manipulation or pharmacologic interventions. “As soon as five years from now,” they wrote last year, “intervention studies could provide definitive empirical evidence for one or more interventions that significantly reduce mortality and delay age-related diseases when implemented in middle-aged dogs. This would…provide dog owners years of extra time with their

To be sure, many veterinary researchers do not anticipate advances in the longevity of larger dogs so optimistically. Nonetheless, it’s encouraging to think that people who raise dogs like Saint Bernards and Great Pyrenees might someday get to love them longer.