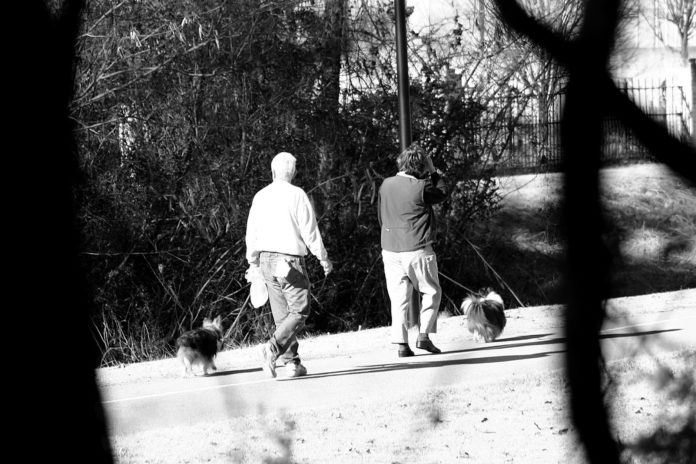 People who regularly walk a dog — and we assume that means almost everybody reading this sentence — are significantly less likely to have diabetes. They’re also less likely to have high blood pressure and high cholesterol than their non-dog-walking counterparts and are less likely to smoke cigarettes, too. And they’re thinner.

These are the findings of exercise scientist Cindy Lentino of the George Washington University School of Public Health and Health Services. Ms. Lentino assessed differences between dog owners who walked their dogs, dog owners who didn’t, and non-dog walkers — a total of more than 900 people spread among the three groups. Among her findings: those who did not walk or own a dog were two and a half times as likely as those who regularly walked their dogs to report being treated for diabetes. They were also almost twice as likely to report having high blood pressure, which increases the risk for stroke, and high blood cholesterol, which increases the risk for a heart attack. In addition, they were heavier (and more depressed, too, a health indicator in and of itself).

Ms. Lentino’s findings are not surprising in light of a spate of studies showing that people who walk their dogs come closer to meeting the minimum standards for physical activity set by the federal government to improve public health. Consider research conducted by Michigan State University veterinarian Mathew Reeves, BVSc, PhD. In a survey that looked at the habits of almost 6,000 people, he and his colleagues found that the odds of walking at least 2 hours a week were almost 35 percent higher for dog walkers than for those who don’t take a pooch out. That figure is key. Two and a half hours weekly translates to a Department of Health and Human Services recommendation to fit in a minimum of 30 minutes of moderate-intensity physical activity at least five days out of seven.

Almost half of all dog walkers met the threshold, compared with only about a third of people who did not own a dog or who owned one but did not walk her on a regular basis (stating that their dog stayed outside most of the day, was walked by someone else, or was too old or feeble to be walked). Put another way, dog walkers averaged about an hour more walking per week than dog owners who stayed put while their dogs got out and did their “business.”

Epidemiologists at the University of Western Australia also found walking a dog increases the amount of time people engage in physical activity. They looked at the exercise habits of 773 people, then zeroed in a year later on the 92 of them who had acquired a dog during the intervening time. The upshot: the new dog owners were walking almost a half hour longer each week than they had been before, while those who continued on as non-dog owners lost ground, averaging a few minutes less walking per week.

Investigators at the University of Missouri showed that dogs make even better walking companions than fellow humans. In a study conducted at an assisted living facility, they assigned people either to walk five days a week or serve as a control group by remaining sedentary. Among the walkers, 23 chose a friend or spouse to walk with while 12 took a bus to a local animal shelter and were assigned dogs to walk there. It was the dog walkers who demonstrated a significant increase in fitness. Their speed increased by 28 percent, compared with only 4 percent among those who ambled with a human companion. Why? The humans started kvetching, making excuses to skip the walks. Not so the dogs. They liked getting out and walking.

Not only did the dog walkers walk faster, a number of them also stopped using canes and walkers over the course of the 12-week study. They improved the muscle strength in their legs with repeated exercise. Other research has reached similar conclusions about better mobility among older people who begin walking dogs.

Missouri study leader Rebecca Johnson, PhD, RN, FAAN, is convinced enough about the importance of the results that she has coauthored Walk a Hound, Lose a Pound: How You and Your Dog Can Lose Weight, Stay Fit, and Have Fun Together (Purdue University Press).

It makes sense that having a dog could lead to increases in exercise and improvements in fitness. Dogs have to go out. It can’t be put off no matter how tired or disinclined their owners might be. Anyone who loves his or her dog wants to make sure she’s comfortable and has proper outlets for releasing stored up physical energy.