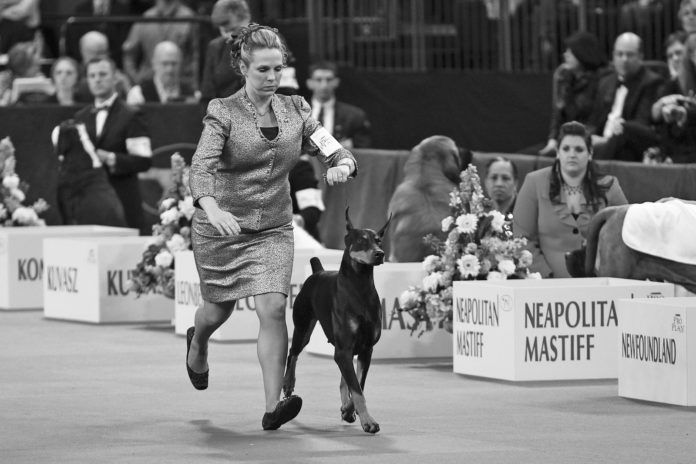 Say “American Kennel Club,” and many people automatically think of terms like “pedigree dogs” and “breed purity,” and they don’t like the sound of them. They smack of elitism and purposeful exclusion, conjuring up images of perfectly coiffed people showing perfectly coiffed Afghans and Irish setters at the Westminster Dog Show — the sort who wouldn’t consort with the hoi polloi and who wouldn’t let their dogs cavort with a mutt. Detractors say, too, that dogs should not be bred specifically to promulgate a particular breed when there are so many wonderful strays and shelter dogs available for adoption.

From the looks of it, perhaps as many as one in two dog owners is of that opinion. “Fifty percent of pet dogs in America are purebreds, and 50 percent are mixed breeds,” says Jerold Bell, DVM, director of the Clinical Veterinary Genetics Course at Tufts.

It certainly can’t be denied that as the largest and most well known registry of purebred dogs in the United States, the American Kennel Club, or AKC as it is known, is very much about dog purity. That’s much of its raison d’etre, after all. But even so, it’s not all about the length of a dog’s snout or other aspects of his conformation.

To the contrary, the AKC has programs for mixed-breed dogs as well as purebreds. “The majority of our programs are actually training programs to helps owners get along with their dogs,” says AKC communications director Lisa Peterson. In fact, Ms. Peterson points out, “our premier program is the Canine Good Citizen program, which is open to all dogs.”

To be awarded the AKC’s Canine Good Citizen designation, a dog must pass a series of 10 tests. Among them: accepting a friendly stranger, which means allowing someone to approach and speak to the dog’s owner in a natural, everyday situation; sitting politely for petting; walking cooperatively on a loose lead; walking through a crowd; coming when called; and reacting casually and politely to other dogs.

Evaluators are available around the country (click on the “Dog owners” tab at akc.org and then click on “Canine Good Citizen” on the dropdown tab for more information). “By earning the Canine Good Citizen certificate” for your dog, Ms. Peterson says, “you’re showing you’ve made the commitment” to having a better relationship with your pet and a better behaved dog in a world full of people, not all of whom are dog lovers.

The Canine Good Citizen program also has value in a broader humanitarian sense. “It’s used by many therapy organizations across the country to test dogs’ suitability for therapy work,” Ms. Peterson says. “It’s also used in shelters to help acclimate dogs to the community, and in prison programs, where dogs are brought in to be worked with by inmates. It is now recognized by at least 40 states as the measure of a good dog,” she says.

Strengthening a dog’s ability to get on with people, and with his owner in particular, is his participation with his human guardian in activities such as agility, tracking, and rally events, and the AKC allows purebred dogs and mixed breed dogs to compete together. Such activities significantly improve the bond between an owner and her dog because they hone the connection between the two even beyond what the Good Citizen program can do; there has to be close communication and cooperation, and one of the many positive results (besides the fact that active game-playing with people makes dogs happy) is a better behaved pet who is more inclined to listen to his human guardian.

“I think the whole idea” of letting mixed breed dogs into various action-based competitions put on by the AKC is that “dogs that are trained are better” to be around, says Charlotte McGowen, a senior dog show judge for the organization. “We have so many unmannerly dogs out there right now. Some of the old purists were hrumphing a bit about” allowing mutts into these events, she says, but for any dog, it “ends up being fun for the pet and fun for the person, and the person ends up getting a better bond with the dog — and a better appreciation for what it is to have a trained dog.

“I’m a big advocate of trained dogs,” she adds. “I’d go to a dog show with my little guys [papillons] where there are 1,500 dogs who are trained. But I wouldn’t go into a dog park with six dogs of unknown origin or training. At a dog show, nobody’s double handling the leash” to keep their dog from jumping on someone else. But too many times with mutts, she opines, there’s less of a sense that behavior is critical. “It’s okay for a mutt to bite. It’s had a bad life, you know,” she says, citing some popular sentiment. “People don’t accept that in a purebred.” There’s a double standard at work, she believes. At the same time, she comments, “I see a lot of purebred bashing.”

Ms. McGowen also makes the point that even showing dogs in conformation trials is about training. “It’s not just about walking up and down” in front of the judges, she says. “It’s a whole lot more about the subtle communication between an owner and her dog. For instance, if my dog comes into the ring and is not standing just so but has been trained properly, I can move my hand or lean my body, and the dog becomes perfectly aligned to look its absolute best for the two minutes the judge has to evaluate it. When the competition is really stiff and tight and very little separates one dog from another, having a trained dog is a definite advantage.

“Training is really about the trainer,” she adds. “If you’re a clever trainer, you can train all kinds of things. They’ve trained lions and elephants.” Why not dogs?

AKC activities open to mixed breeds as well as purebreds extend beyond behavior and training programs that strengthen the bond between owners and their animals. There’s also a branch of the organization called the Canine Health Foundation, which is dedicated to eradicating diseases seen throughout the canine population, says Dr. Bell. People have an idea that purebred dogs have more of certain diseases than mixed breed pets, and in a certain way that can’t be denied. Prospective owners should be aware that some purebreds are unquestionably predisposed to certain diseases, and that adopting a mixed breed dog or a purebred dog of another breed may reduce or eliminate the risk of those diseases. For example, the severe upper airway problems seen in certain brachycephalic purebreds such as English or French bulldogs almost never occur outside those breeds. Veterinarians are very knowledgeable about the possible disease predilections of specific breeds and can be an excellent resource for anyone considering acquiring a new dog.

But the predilection for particular conditions in particular breeds is only true to a certain degree. Genetically triggered diseases, even those to which certain breeds are predisposed, are spread throughout the canine population. And money funneled from the AKC to the Canine Health Foundation goes to research to find the causes of these diseases; earlier, more accurate diagnoses; and better, more effective treatments. “The AKC puts millions of dollars a year into this research,” Dr. Bell says. To date, says Ms. Peterson, it has “donated more than $30 million to fund studies that identify and resolve canine health issues for all dogs.”

Other initiatives include AKC’s Humane Fund, which provides grants and other services to organizations that allow victims of domestic abuse to enter and stay in shelters with their pets. And the organization’s Companion Animal Recovery program has provided more than $4 million to fund search-and-rescue operations and pet recovery during times of disaster, for mutts (and cats) as well as purebreds.

But should creating purebreddogs even be a goal?

Some people would say that despite the AKC’s good work for dogs in general, it should not be the goal of any organization to promulgate what amount to designer dogs of specific breeds. It’s akin, they say, to making sure red-haired, green-eyed people mate only with each other to produce children with predictable physical characteristics.

But advocates of breeds make the case that it’s the temperaments associated with certain breeds that is critical to successful dog ownership. They don’t argue that the way a dog looks doesn’t influence people’s decisions about which dog to bring into a family. It does. It’s knowing in advance how a puppy is apt to act once he matures, however, that makes specific breeds so useful in pairing the right dog with the right people so that it becomes their forever dog rather than one that is relinquished to a shelter.

“Part of the beauty of a purebred dog is that the character is predictable,” says Ms. McGowen, who is an AKC breeder of merit, meaning that she uses screening tests available today to check her dogs’ genetic blueprint for potential health problems and then make responsible decisions about whether to breed them if a deleterious mutation shows up rather than use a hit-or-miss approach. “I’d rather have a dog that’s predictable, and I’d rather get it from someone who can tell me about it,” she comments. “What kind of temperament does this creature have? Is it suitable for my particular lifestyle? My family’s?”

Of course, not every single Labrador retriever is going to get along with children even though that is part of what the breed is known for, just as not every single Akita is going to be protective. “Do all purebred dogs come out perfect?” Ms. McGowen asks rhetorically. “Absolutely not. But do all human beings come out perfect?” At least with a purebred dog, whose personality is to a large degree genetically imprinted, just like his looks, you have a reasonably good chance of knowing the kind of pet your puppy is going to grow into. And that increases the chances that you will not end up relinquishing the dog to a shelter later on, when you learn that his personality style does not fit with your household’s.

None of this means that AKC takes the position that adopting a mixed breed dog is automatically a bad idea or that only purebred puppies with “papers” turn out to make good pets. “The illusion of our being an elitist organization is incorrect,” says Ms. Peterson. “That’s why the majority of our programs are training programs to help owners get along with their dogs” no matter what their origin, she points out. But, as the organization’s advocates makes clear, having a purebred dog is much more than about how the pet will look in a photograph.