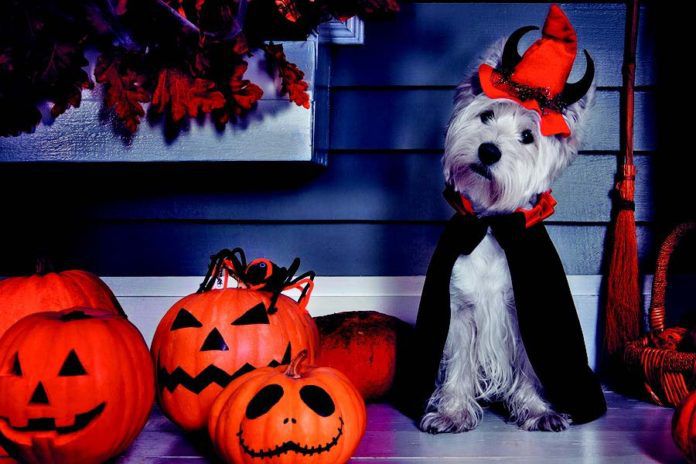 Q. I have the cutest Halloween princess costume for my dog, and I want to show it off when children come trick or treating, but my neighbor says it is wrong of me to confine her in clothing. I understand the concern, but I think she’s being a little over the top. What do you think?

A. In general, we’re not fans of dressing up dogs for occasions that they don’t understand. A canine, after all, doesn’t have a clue about the significance of Halloween.

That said, it really depends on the dog. Some dogs like being dressed up because it means getting extra attention from people who coo over how adorable they look. We heard from one reader whose therapy dog loves seeing her doggie clothing laid out because she knows it means she’s going to visit with people who fuss over her. She has skirts, tutus — you name it.

But if a dog fidgets in clothing — resists having her feet put through the little holes or constantly paws at the material to get it “away” from her — she should not be dressed, no matter how cute she may look.

We suggest that if you’d like to give it a go, don’t let Halloween night be the first time you put the costume on her. Kids in strange clothes will keep knocking at the door, which is going to upend her routine as it is. Try the costume a couple of times before Halloween and see how she reacts. You’ll know pretty fast if she’s okay with it. If she’s not, she’ll start scratching at the material, and you should abandon the idea.

Make sure no costume you want to try obscures your dog’s vision or blocks her nose or mouth in any way. It shouldn’t circle her head or neck too tightly, either. And any attachment the dog can rip off and swallow — like the glittery star on a wand — has to be removed beforehand or attached very securely.