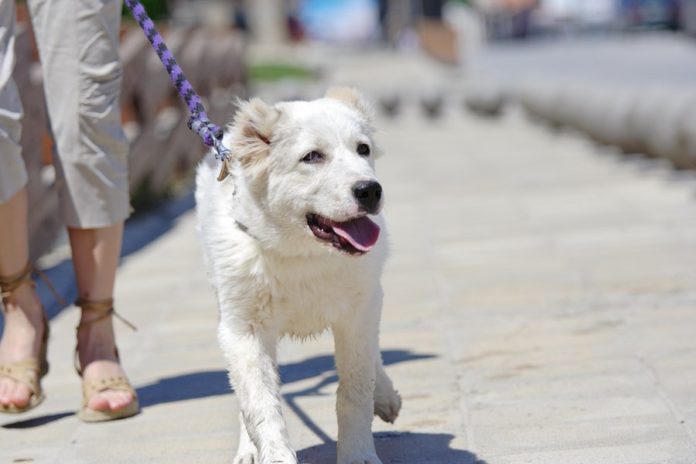 Fitness experts say we should each try to take about 10,000 steps a day, which amounts to walking five miles — or about 1,800 miles a year. Well, guess what? If you have a dog, you’re covering 1,000 of those miles by walking him. That’s the latest from British pet food manufacturer Harringtons, which surveyed 2,000 dog owners. Their dog walking lasted 34 minutes, on average, and covered just under 2 miles.

The news isn’t all good. The survey found that people walked their dogs just 10 times a week, meaning the dogs often got out only once a day. Granted, one in five owners spent $35 a month on hired dog walkers. But that wouldn’t cover the shortfall. Dogs, especially if they’re medium to large, should be getting out for a half hour or so at least three times a day, if at all possible, and preferably four — not one or two.

Other unhappy news, at least for the dogs: almost one in 10 dog owners reported taking the exact same route every single time they walked their pet. We get to go out as many times a day as we would like, of course, experiencing new sights and sounds and other sensory variety. How many times in a row, day after day and year after year, is a dog expected to enjoy sniffing the same hydrant?

Then there’s the laziness factor. Those surveyed revealed that households experience two arguments a week — either between partners or with children — about whose turn it is to walk the dog. And a separate British study by another pet food marketer in the UK, Tails.com, found that during the cold days of winter, one in six people hopes for inclement weather as an excuse not to take the dog for a walk. (Grrrr….)

Given that many respondents in the two surveys said either that regular exercise was the most important factor in maintaining their dog’s well-being, or that consistent physical activity helped keep their pet calm or improved their own emotional well-being, or that they often bumped into friends during their walks and sometimes slipped into a pub with their pet for a pint (remember, these were British surveys), not walking the dog more often is silly.

Make a pact with yourself. If you take your dog out for a walk only once a day, go for two times. If you’re up to two times, go for three. You and your canine pal will both be better off for it.