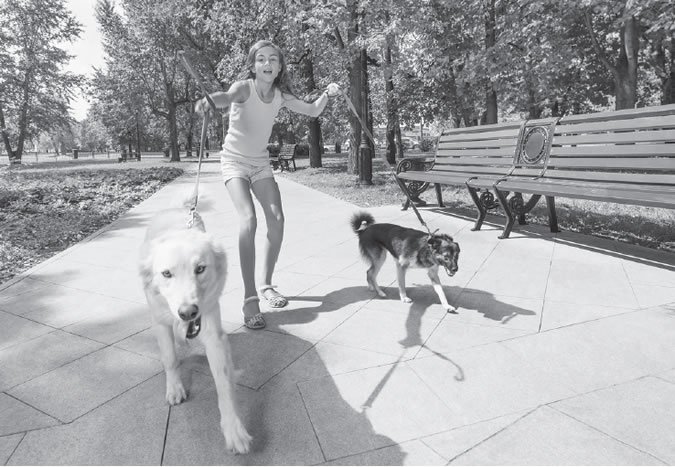 Emergency room physician Dr. Jessica Normile has seen it all when it comes to people falling over their pets — literally. “You’d be surprised how many dog-related injuries there are,” says the doctor, who treats patients at the Detroit Medical Center Huron Valley-Sinai Hospital in Commerce, Michigan. “We had an ice storm recently, and a lady went out there to shovel a path for her dog and slipped and ended up with a brain bleed.”

But that particular kind of dog-related accident is unusual. “Most of them are about tripping over the dog,” Dr. Normile says. For instance, she relates, “I had one woman whose dog yanked her off her feet. She fell down and smacked her face and ended up with bruises and abrasions.”

Lacerations and contusions are common, too. But “usually, the biggest thing that we see are falls where people fracture their wrists,” comments Dr. Normile. “In trying to break their fall, they break their wrist and are out of commission for four to six weeks. Sometimes they need surgery and end up losing work hours. It isn’t just retired people. It costs people money” when their dog lays them low.

Insurance costs can be high, too. “If the person who falls is older and hits her head,” Dr. Normile says, “she’ll tend to end up with a CT scan, even if the incident seems relatively minor. That’s because older people are more likely to develop brain hemorrhages. As we age our brains shrink. That leaves more room for the brain to bounce around in the skull, resulting in a contusion [bruise] or in the tearing of veins that cause subdural hematomas — bleeding between the skull and the brain itself.”

Often it’s not about tripping while walking the dog, although that’s certainly common enough. Rather, owners fall over a dog lying in their way, or trip over a dog toy or food or water bowl. “I remember one instance in which stepping on a dog toy led someone to fracture an ankle that required surgery,” notes Dr. Normile. “Sometimes they fall because their dog cuts in front of them, or cuts them off on the stairs, and they’re carrying something and don’t see the dog laying there.

“My hospital is relatively small,” Dr. Normile adds. “But this happens often enough that I see a lot of related injuries. I would say at least once a month. And a lot of people who fall over their dogs don’t necessarily end up in an emergency room. They might go to an urgent care facility.”

Dr. Normile’s experience is not at all unusual. In fact, in an investigation published in the Journal of Safety Research, researchers at the Centers for Disease Control and Prevention reported that dog and cat injuries send an estimated 87,000 people to emergency rooms every year. They looked at nonfatal injuries in 66 emergency room departments around the country over the course of six years and used the numbers they found to come up with an annual figure that would apply on a nationwide basis.

The hazard is much more canine than feline, with dog-associated injuries more than seven times as common as those having to do with cats. And women are more than two times as likely to suffer an injury because of their pet than men. Furthermore, while injury rates are highest for people at least 75, the statistics make clear that pets can prove a hazard for people of all ages. In fact, while fracture rates were highest for people 75 to 84, injuries were most frequent for children and for adults 35 to 54.

As Dr. Normile’s experience attests, fractures and contusions are the most common pet-related injuries. In fact, among patients admitted to the hospital as a result of an accident with their pet, 80 percent are for fractures. But people also experience strains, sprains, and internal injuries.

Many falls occur while people walk their dogs — no surprise there, as so many untrained dogs pull and push their owners along. But more than 60 percent of dog-caused falls occur in and around the home. That has been Dr. Normile’s experience. “Most of the accidents are about people tripping over a dog that walks in front of them at home or laying on the floor,” she says. Sometimes it’s not the dog people trip over but the dog’s food bowl or toy, Dr. Normile reports. According to the CDC report, almost 9 percent of injuries were caused by people falling over a toy or food bowl.

Other dog-related reasons for trips and falls: playing with a dog, chasing a dog, and breaking up a fight involving a dog.

It should be noted that an estimated 87,000 incidents amounts to a little more than one percent of the 8 million fall injuries treated during emergency room visits each year in the U.S. But that’s by no means an insignificant number. It signifies that one in every 100 people who come to the emergency room are there because they tripped or fell in an incident involving their pet. And, as Dr. Normile notes, the number may be higher than 87,000. The CDC researchers note, too, that many people who fall and hurt themselves seek help in places other than emergency room departments.