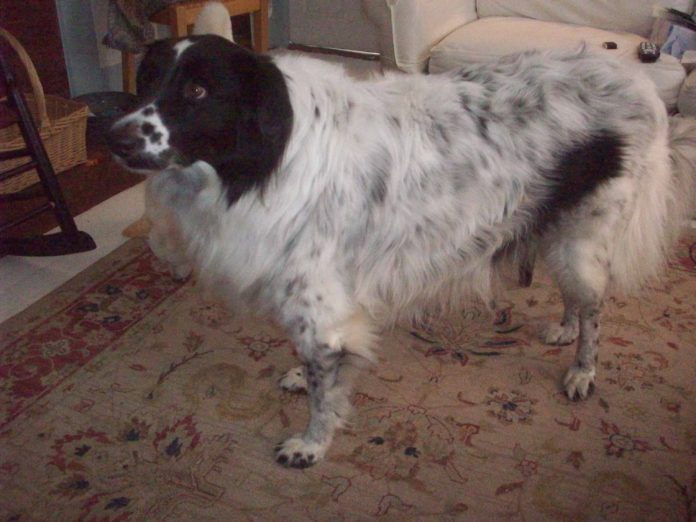 The truest thing you can say about Franklin is that he’s shaped like a bison held aloft on four sawed-off toothpicks. Oh, he’d love to look ferocious while he barks at other dogs. But it’s hard to look ferocious with your long Breck hair, floppy ears, and pretty quill pen tail blowing in the breeze as you shout out to all those who couldn’t care less. The truth is, and I say this with no small modicum of pride, Franklin is known throughout town as the anxious idiot he is, goofily charging at other dogs only to have them put him in his place by sniffing his rump or ignoring him altogether. He cowers if a large truck roars past.

Not so Ellie, the taut, muscular border collie/Lab mix we had before Franklin. Although a pussycat at home, her determined demeanor, short hair, and prick ears, not to mention her penchant for barking like she meant it, left people — and other dogs — unnerved. Poor Ellie. She simply had been through too much before arriving at our home to calm down enough to gain — or earn — trust beyond our walls. But even among the minions who were afraid of her, there were no shortage of admirers of her regal look and bearing.

For all their differences, Franklin and Ellie do have one thing in common: black faces and largely black bodies.Which I guess begins to get at dispelling two notions: 1) that all black dogs are scary (according to my own little study only half of them are) and 2) that people don’t like to adopt black dogs and/or don’t like the look of them.

It’s commonly said that black dogs are the ones left behind in shelters, the ones overwhelmingly euthanized. There’s even a name for it: Black Dog Syndrome. But are the anecdotal reports born out by the scientific evidence? Check out this month’s story.

While we’re on the subject of black dogs, did you hear about the black Lab who went to a veterinary chiropractor for intractable pain in his spinal column? He belongs to the head of our Pain Consultation and Referral Service, Alicia Karas, DVM. After he suffered from a severe bout of spinal pain, Dr. Karas finally had him treated by an animal chiropractor. The results: check them out for yourself in the accompanying article.