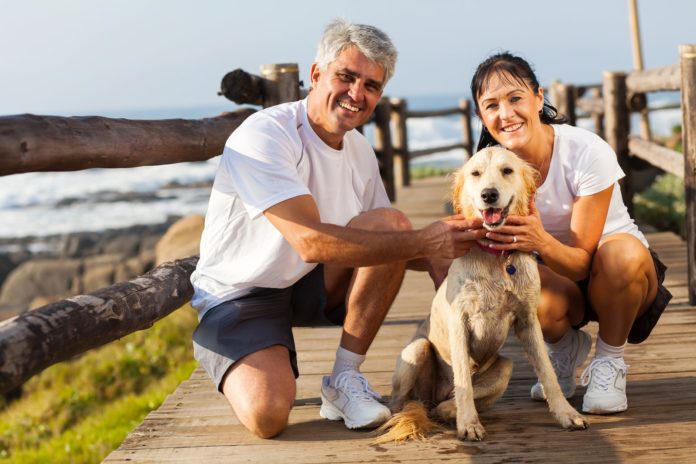 “Being at the veterinary school, we have lots of options for people to take care of our dogs when we go out of town,” says Tufts veterinarian Linda Ross, DVM, DACVIM. “We have the technicians and also 400 veterinary students.” Even, so, Dr. Ross, who used to have yellow Lab April, did not take boarding her dog lightly when she spent a six-month sabbatical in England some years ago.

“It’s hard to take a dog into England,” she says. “And you don’t want to kennel a dog for that length of time. I kept asking around, going from person to person asking, ‘Do you know anybody?’ Some of them would say, ‘No, but why don’t you try So-and-So?’ It took me quite a while to find the right person, but I was fortunate enough to finally come upon somebody at work who’s a Labrador person and loved having them around. She lived about an hour away, but that worked out fine.”

Granted, six months away from your dog is an unusual situation. But even for short trips, Dr. Ross says, “I think the ideal option is to find someone you can leave the dog with,” someone who will treat her as a family member while you’re away. Even better, she comments, is “if you’re willing to have somebody housesit for you” and can find a person you feel comfortable entrusting with your home and your pet. “That way the dog is in her own environment,” Dr. Ross points out. “A house sitter can take care of a lot of other things as well. They can take in your mail, make sure the pipes don’t freeze, things like that.”

As great an option as leaving the dog in her own home is, Dr. Ross says that “one thing I don’t recommend is a pet service that will come around three times a day and let the dog out and feed her. I think that’s okay for a day or two. But dogs are social creatures. They get lonely — and that may make them destructive. They need more interaction with people than just a half hour here and there. If you’re going to be away for at least several days, your dog would be better off at a kennel,” even though that means taking the time to choose a facility, getting her there before you leave, and picking her up on your return — all of which take extra time.

As inconvenient and second-best as boarding your dog at a kennel might be, that’s simply going to be the default solution for a lot of people. They might not know anyone who’s willing to take in their dog during an absence or might not feel comfortable with having someone come stay in their home to dog-sit. But how do you choose the right boarding facility?

“You need to think a little bit about your own particular dog and your own particular comfort level about the kind of place in which to leave her,” says Dr. Ross. For instance, she comments, “for some dogs, being in a cage isn’t a big deal; for others it is.” If a cage is anathema for your pet, clearly you’re going to want to find a facility where the dogs have free access to the outdoors — or to a big play room. Particularly on the west coast, Dr. Ross reports, there tend to be options for dogs in boarding situations that allow them more space. “There are facilities that provide them with small rooms, more like in a home setting, although they clearly are going to cost more money” than boarding kennels that house dogs in kennels.

Food might be an issue, too. Some dogs are easy keepers, happy to eat whatever’s provided. Others feel bereft without their usual chow, so you’ll need to find out whether the staff will feed your dog exactly what you do, and, if it’s important, whether they’ll stick to your feeding schedule. A dog who’s used to three or four small meals a day might have a hard time on two larger meals.

“You definitely need to do some investigating,” says Dr. Ross. “And it’s not necessarily going to be an inexpensive proposition. Talk to people in your area that you trust. Your veterinarian may have recommendations, too. And it’s really important to go to the kennel you’re considering, meet the people who work there, and find out with specificity the daily routine. Also, ask to walk through the area where the dogs are kept.” That is, if they won’t let you past the front desk to see the area where the dogs live while they’re there, take that as a sign that you should not leave your dog at that place.

Of course, even with finding out all the particulars, “there’s sort of that gut feeling that you can’t deny when you go to a place,” Dr. Ross says, “that sense of whether it just feels like a good fit for your dog and you.” If you happen to second-guess your gut once you’re already out of town, more and more kennels now have webcams, like built-in nanny cams, so you can check in on your dog in real time.

If your dog has health requirements

Boarding “gets trickier” for a dog with medical requirements, Dr. Ross points out. “If your pet is not a standard feed-and-walk type, you have to investigate further.” In fact, she says, “while you may even have a friend who can take care of your healthy dog, a dog who has, say, diabetes is a whole other issue. The friend has to be able to give daily injections, and she needs to know what to do if there’s an emergency.

“Or you may have an older dog on medication for heart disease or inflammatory bowel disease or maybe even one who’s getting chemotherapy for cancer treatment.” This is not garden variety pet sitting.

“In those situations you really will need to find someone skilled enough to provide the kind of medical care necessary — and also detect if there’s a problem. Some very good kennels can do that,” Dr. Ross says. “I saw a dog not too long ago with Addison’s disease, in which the body lacks the hormone cortisone. The clinical signs are that the dog feels weak, won’t eat, has vomiting and diarrhea. This particular dog became sick while he was at a kennel. They recognized something was wrong, brought the dog to the vet right away, and saved his life in doing so.” In other words, you want to make sure that the kennel where you leave your dog will go the extra mile.

Sometimes, if your animal has a serious medical condition, the dog’s vet may be able to keep her in the hospital if you’re only going to be away a few days, Dr. Ross offers. “But even at that,” she says, “many vets won’t have someone there 24 hours a day. Neither will many kennels for that matter,” something that needs to be considered very carefully, especially in the case of a dog with compromised health.

Another option for a dog with health issues is to “check with your vet to see if there are any vet techs [veterinary nurses] who may be available to keep your pet at their house or to house sit. With many diseases, stress is not a good thing, and even for those dogs who like going to the kennel (and a good number do), it’s still stressful.”

Whatever plan you put in place, put it in place ahead of time — even before you plan a trip. “I’ve had clients frantically calling kennels as they’re getting ready to leave for the airport,” Dr. Ross says, because they didn’t like the thought of leaving their dog, were afraid of not being able to find the right temporary home for their pet, and so left off tending to this critical aspect of their trip.” It’s a recipe for disaster, she says, because kennels require paperwork showing the dog is up to date on various vaccinations, and the vet’s office might not be open and able to fax over the paperwork to the kennel at the moment you need it. Also, there’s a ramp-up time for certain vaccinations. It takes several weeks for the shot to have an effect, and kennels build that ramp-up time into their limitations on which dogs are allowed to be boarded.

“You especially have to plan ahead if you’re going to be traveling over a holiday,” Dr. Ross says. “No matter what kind of arrangement you’re making — kennel, someone’s home, whatever — people and facilities get busy during holidays.”

One last note: do not be upset if your dog comes home with her system a little out of whack. It doesn’t mean you chose the wrong place. “I would say it’s not uncommon for a dog coming home from a kennel to have a little bit of an upset in her eating habits or a little diarrhea, even if she was fed her usual food while you were away. It’s not at all unusual if it’s short-lived, and it doesn’t represent a problem with the dog’s care. It just has to do with the stress of being in a novel situation.”