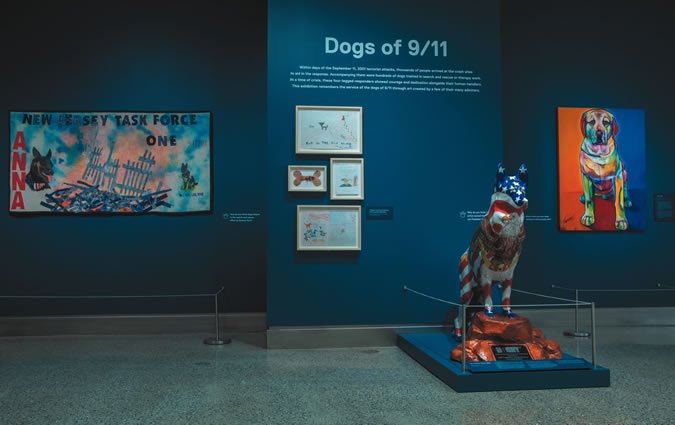 In the immediate aftermath of the September 11, 2001, terrorist attack at New York City’s World Trade Center, thousands of people arrived from all over to help in whatever ways they could. So did hundreds of dogs, who put their lives on the line digging through smoldering debris in search and rescue missions (the last living person was found in the wreckage by a dog 27 hours later) and also as cadaver dogs trained to find human remains. In addition, many worked as therapy dogs to comfort traumatized and grieving people in shock.

People have been wanting to learn more about the heroic efforts of the dogs on the scene, says the Senior Communications Director of Ground Zero’s 9/11 Memorial & Museum, Kate Monaghan Connolly. In response, a “Dogs of 9/11” installation featuring art forms ranging from statues to paintings to children’s drawings and letters has been set up just outside the museum’s Education Center.

The temporary exhibit will run through the fall of 2019.