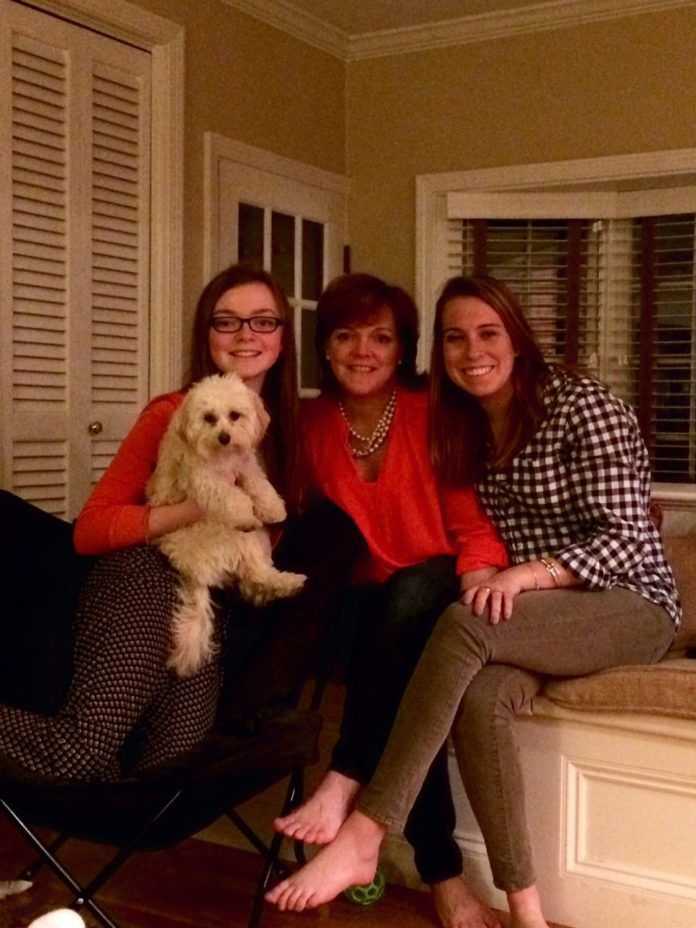 Carol Costello was nervous. “I’d never had a dog before,” she says, “and it bothered me that Teddy would be home by himself for so many hours every day while my husband and I were at work and the kids were at school.”

Teddy was the malti-poo — half Maltese, half poodle — that the Massachusetts-based Costellos were adopting from a breeder in Spokane, Washington, and Ms. Costello’s consternation actually began even before the 12-week-old dog stepped into her house. “I was concerned about his transition all the way across the country,” she says. “I didn’t want him being ‘shipped’ in a crate in the cargo load. Fortunately, we were blessed that one of our neighbors goes out to Spokane every summer, and she brought him back for us. I had to purchase a $100 ticket for the puppy to be in his case at the foot of my neighbor during the plane ride, but I felt that was the better thing to do.” [We liked Ms. Costello already, even before she described how she took care of Teddy once her family got him home.]

“Fortunately,” Ms. Costello says, “Teddy arrived in late July, so making sure he had company all day wasn’t so much of an issue. The kids were home.” [She and her husband have three children — a daughter in college, a son in high school, and another daughter in middle school.] Everybody was old enough to watch him, take care of him.”

Then September came. “I work out of the house three days a week,” Ms. Costello explains, “and my husband also works away from home some days but not others. We tried to coordinate as much as possible that on those days that I was at the office, he would be at home. On those days that we both had to work outside the house, I forced myself to take a lunch hour to come home and be with Teddy for a while in the middle of the day. I’m lucky that I work only five minutes from the house.

“I could have taken him to the office with me — my boss brings his own dog sometimes — but I felt uncomfortable because we didn’t have housetraining fully down by that point. And I didn’t want to keep him locked in a crate by my side while I was at my desk.

“On the days I came home for lunch, he was so excited. The longest he would be alone at first was four hours — I followed the ‘months in age plus one’ rule to help him avoid having accidents. It was a little bit hard to leave him to go back to work after lunch. But I always left the TV on low for him, and also left a light on, so it would seem like somebody was there for him.

“He’s 10 months now. A very calm and easygoing dog. People ask me what breed he is when they are thinking of getting a dog because he is so easy to be around.”

Of course, as Ms. Costello’s dedication suggests, it is definitely a combination of nature and nurture.

She still doesn’t leave Teddy home alone all day, even though he grew out of the sensitive period of learning many months ago.

“I felt bad leaving him three days a week, even though I was coming home in the middle of the workday for lunch,” Ms. Costello says. “So I started dropping him off at my neighbor’s house on one of the days I went to the office. She’s in and out all day. She actually prefers me to drop him off by her because her own dog is so lonely during the day. Now it’s up to two days a week. On the days I’m at the office and Teddy’s not at the neighbor’s, I still come home for lunch.

“About a month ago I took him to a doggie daycare nearby. I thought maybe he should socialize with other dogs. But when I asked to see the room he’d be in and the dogs he’d be with, they didn’t allow me to go back there. They said they’re not insured for me to see the room where the little dogs play because you have to walk through the room with the big dogs to get there. I didn’t feel comfortable with that, so I didn’t do it.”