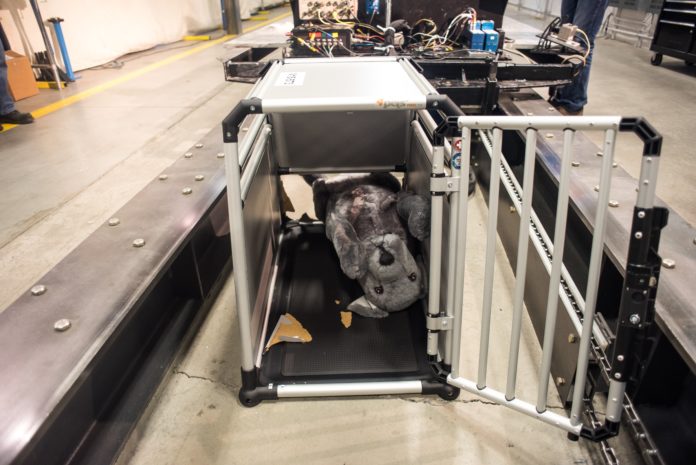 No small number of manufacturers of pet carriers and crates claim their products have been tested for crashes and therefore offer protection for your dog in the event of a collision, but how safe are these items, really? Not very, according to results of the 2015 Crate and Carrier Crashworthiness Studies, which were the combined work of the Center for Pet Safety, a non-profit research and consumer advocacy organization, and Subaru of America, Inc.

“While many crate and carrier manufacturers claim their products are crash-tested and safe for use in a vehicle, there are currently no test protocols or performance standards in the U.S. to substantiate these claims,” says a joint press release from the two entities. Adds Center for Pet Safety CEO and founder Lindsey Wolko, using the plastic carriers on the market today is akin to “putting your dog in a laundry basket and expecting it to survive.”

The results follow a 2013 study conducted by the Center for Pet Safety and Subaru on pet harnesses for cars that had similarly distressing results. Only a single harness tested proved useful — the Sleepypod Clickit Utility received Top Performing status. Sleepypod has since voluntarily certified its Clickit Sport with the Center for Pet Safety, earning a 5 Star Crash Test Rating by the organization.

But in most cases, in crash conditions using dummy dogs, the researchers found a low likelihood of survival for the dog; danger to the people in the car if the dog became an airborne missile; damage to the vehicle if the dog flew through the air; and a risk of choking or other bodily harm to the dog if the harness cinched too tight on impact.

The one crate that truly protects
In the latest research, “crate” generally refers to those products that are typically secured in the rear cargo area of a vehicle and have various options for holding them in place, while “carriers” are generally designed to be secured on the rear passenger seat. Models chosen for testing had claims of “testing,” “crash testing,” or “crash protection.” The connector straps used to attach the crates and carriers to the car were included in the testing to determine the best performing brands overall.

All items were tested in a crash simulation that registered the same impact as a car going 30 miles an hour — only half the mileage of a somewhat slow-going vehicle you might pass on the highway. Still, such a speed could pack a wallop. At just 35 miles per hour, a 60-pound dog thrown from his seat would exert 2,700 pounds of pressure upon hitting an object, including a human passenger (or driver), according to information from Edmunds.com that is cited by the American Animal Hospital Association.

The Top Performing Crate was the Gunner Kennel G1 Intermediate with 8-Foot Tie Down Straps. “The Gunner Kennel retained structural integrity for the duration of the crash simulation,” the study says, “fully containing the test dog” with no breaking or bending of the crate. Additionally, the connecting straps “adequately restrained the crate and prevented the product from striking the seatback fixture.” That is, the crate was in the back section of a small SUV but did not bang up against the back of the vehicle’s back passenger seat.

That’s a big issue, and one that’s often not adequately addressed — or is addressed with inherent design flaws. Consider that a number of European-made crates have a slant on one side so that they can bump right up against the opposing slant in a somewhat reclined back seat from behind, helping to absorb energy upon impact. But the problem with that feature, says Ms. Wolko, is that “if you have a 30-pound crate with a 76-pound dog in it, you have exceeded the limit for the seat back, which can only manage about 40 pounds during testing. That seat back may break.” Imagine a child in a booster seat sitting in front of the crate,she comments.

What went wrong with the crates that failed
Other crates tested included the 4Pets Proline Milan, the Mim Safe Variocage Single, and the Roto Mold by Ruff Tough Kennel. The results were concerning, to say the least. With the 4Pets Proline Milan, the anchoring straps let go of the crate; there was a full rupture of the connection. In addition, the lock failed, letting the crate door open inward toward the dog dummy during impact. The crate flew off the test sled onto the floor with its rear panel destroyed and the rear end of the test dog sticking out. Force was needed to get the crate open wide enough so that the test dummy could be retrieved from the damaged crate.

With the Mim Safe Variocage, the front connecting strap tore through the metal connection point on the crate. In one test, both the front and rear connection straps broke. The product is designed to collapse into itself — and did in fact crush 10 inches. Only the body of the test dog stopped the crate from collapsing further.

As for the Roto Mold from Ruff Tough Kennel, the researchers found a failure in three out of four tie-down brackets, a complete separation of the door from the crate, and some deforming of the crate while the broken-off door smashed into pieces. Finally, the test dummy dog did not remain in the crate upon impact.

Only two carriers did the job
The study named both the Pet Ego Jet Set Forma Frame Carrier with ISOFIX-Latch Connection and the Sleepypod Mobile Pet Bed with PPRS Handilock as the top performers in the carrier category. Each of those carriers fully held the dummy dog safely before, during, and after the simulated crash, and their connections to the vehicle remained fully intact throughout. It’s not surprising. The Pet Ego Jet Set Carrier, while made of fabric, has an internal metal frame. The Sleepypod also has ample structural integrity.

One example of a product that failed is the Petmate Compass Carrier held in place by the PetBuckle Restraint System. The carrier fractured.

The Snoozer Roll Around Travel Dog Carrier Backpack 4-in-1 was tested with a 20-pound dummy dachshund. Upon impact, the test dog was thrown into the air. The Pet Ego Pet Tube Car Kennel with Pet Tube Comfort Pillow, a collapsible travel product, had full failure of connection to the vehicle with a 75-pound dummy Weimeraner inside.

It should be noted that there were some problems initially with the products that performed well, but their manufacturers were already at work on, or made changes to, their carriers based on results with first-round testing. “We reached out to the manufacturers, and Sleepypod called back within five minutes and had a representative on site at the test facility within three hours. And Pet Ego called back within four hours,” says Ms. Wolko. “One manufacturer has still not responded.”

Why the problem is so widespread
Part of the reason there are so few crates and carriers that are safe for car travel is that there are no federal standards; no agency is overseeing the process. That is, the Consumer Product Safety Commission does not classify pet products as consumer products because they are perceived, incorrectly, as affecting only the safety of the pet. “That is what is so disturbing,” says Ms. Wolko. “We’ve heard from many pet owners who have put their own lives at risk to save their pets from an inferior product.”

Of course the dog, too, should be able to ride in a car without the risk of hurtling through the air and be given the best possible chance of survival in the case of a sudden stop or crash, without escaping from a vehicle and having the chance of being hit by another car or running off in fear.