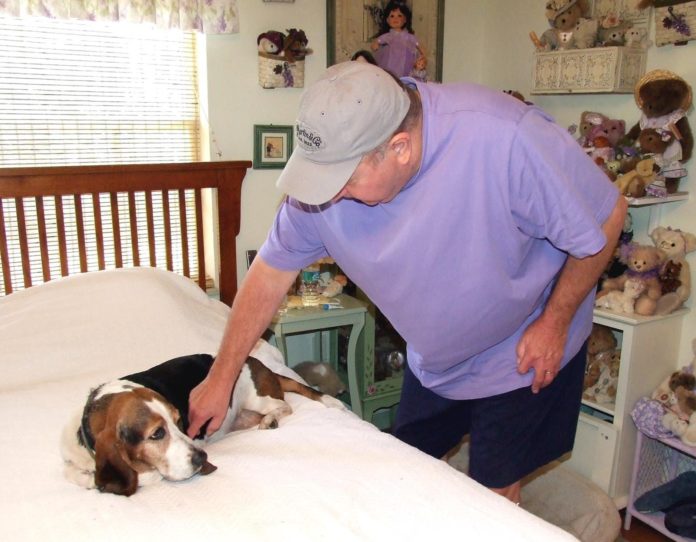 Back in February we told you about Gracie, the Bassett hound who moved in with Florida residents Beth and Mike Phillips after a very rough six years in a breeding mill, where she was at turns neglected and abused. As you may recall, Gracie bonded with Beth Phillips immediately but was scared to death of her husband, a gentle giant of six feet four inches who tried everything — ignoring Gracie so she wouldn’t feel threatened by him, speaking reassuringly when she felt frightened, and tossing treats to her without trying to pet her.

But nothing worked. Gracie could just not calm down in Mr. Phillips’s presence, to the point that if Mrs. Phillips went out on errands, she would dart out of the room where Mr. Phillips was situated and watch him warily the whole time from another space in the house.

We offered several tips for Mr. Phillips to ease Gracie’s transition into his household. At that point she had been there about six months. Among our suggestions: accompany his wife and Gracie on walks so their new pet could see that nice things happen when he is around; be the one to put the food in Gracie’s bowl sometimes so she would come to understand that he is looking out for her needs; try interacting with Gracie when her pal Grover, another Basset hound in the Phillips household, is in the room; and so on. It was believed those gentle strategies would bring Gracie around, change her.

They didn’t. It has now been more than a year since Gracie arrived at the Phillips household, and Mrs. Phillips reports that “things are pretty much the same.” She and her husband still believe it’s his height that upsets Gracie because she’s somewhat calmer when he’s sitting or lying down. “Other than taking off Mike’s legs at the knees,” Mrs. Phillips says, “we just hope that as time goes on she will learn that he is not a threat.”

Gracie becomes particularly agitated and fearful if Mrs. Phillips leaves her alone in the house with Mr. Phillips when she goes out to run errands, and for that reason he will now “often go into the bedroom and shut the door so she isn’t so alarmed.” In other words, because Gracie to this point has been unable to adjust her behavior, Mr. Phillips is adjusting his.

Some might call it taking tiny steps to condition Gracie to Mr. Phillips’s presence. Others might call it ridiculous that a man has to make himself absent in his own household so his dog will be more comfortable. We call it love. So do the Phillips.

“It took years of her previous life to shape her, so it may take a long time to undo the damage,” Mrs. Phillips says. “We just keep on loving her and hope that time will heal her wounds….So many dogs…need loving homes, and it just breaks my heart…that so many are subjected to neglect and abuse.

“I think Gracie’s case has perplexed us so much because my husband really is so good with our pets,” she adds. “They have always flocked to him and taken to him immediately.” Nonetheless, Mrs. Phillips says, not just of Gracie but of all the pets in the Phillips household, “we love them unconditionally and celebrate their individuality.” It’s a little bit “like having a baby who turns out to be deaf, or autistic, or developmentally disabled,” she comments. “You still love your child but you have to adjust your expectations and dreams to fit the reality.”

Indeed, the Phillips have another Basset hound, Bentley, who came to live with them a couple of years ago when he was eight and who “doesn’t like touching much”; can’t have his nails trimmed without sedation; and must be fed outside because of food aggression issues. He also hates to be awakened suddenly. That said, Mrs. Phillips couldn’t imagine life without him. She relates that “after two years, he finally feels like he is part of the family, and just in the past few months will come into the living room. There is an old recliner in our family room,” she adds, “that he has claimed, and he generally sleeps there at night while the other three [dogs] sleep in our room. I wish there were a way to break through his walls, but as time goes by it does get better — we don’t push him and let him find his own pace….he is safe and cared for with us, and we are glad tohave him.”

Even Gracie is warming up at what could reasonably be called a glacial pace, and there are emotional rewards for loving her. She will sit in Mrs. Phillips’s lap and allow Mr. Phillips to sit next to them and pet her without running away — again, he’s shorter sitting down. And she’ll now lay with her head on his leg in bed.Little by little…

The Phillips originally considered giving Gracie up because they did not want her to feel forever traumatized in Mr. Phillips’s presence. But you’d have to pry her away from them at this point. “We suspect she would be afraid of something or someone no matter where she lived,” Mrs. Phillips says. “Overall she seems happy and in the evenings will even roll around on the floor while ‘talking.'”

She even “took a treat from Mike’s hand the other day for the first time,” Mrs. Phillips communicated in an e-mail. “We celebrate the little wins. It takes patience and understanding and would not be a good fit for everyone. But we accept her as she is and love her.”